Hungary's foreign minister has said that migration policy would determine whether the ruling Fidesz Party remains in the center-right European People's Party (EPP) grouping after the European parliamentary elections. 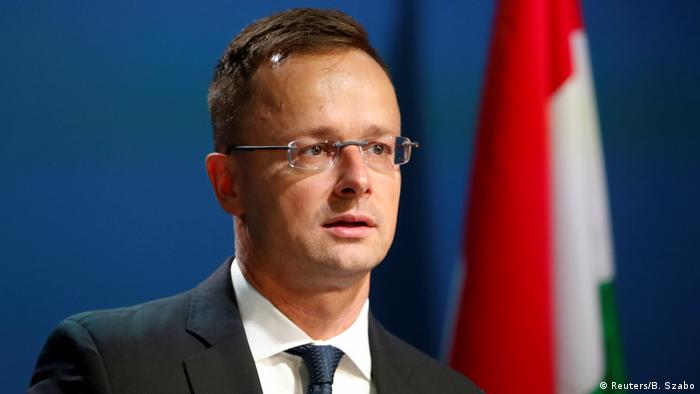 "If the EPP moves towards migration, it is not a direction we can follow for sure," said Szijjarto.

"We hope the EPP will move back to the place where it used to be when we joined … if the EPP makes an alliance with pro-migration parties, that is definitely a red line for us," Szijjarto, a Fidesz Party lawmaker, told Reuters news agency.

The EPP suspended Hungarian Prime Minister Victor Orban's Fidesz Party in March over concerns that it violated EU principles on the rule of law.

Earlier this month, Orban said he wanted the EPP bloc in the European Parliament to have closer ties with euroskeptic and nationalist parties. Szijjarto, too, urged the EPP to shift toward the right.

Far-right populist parties such as Marine Le Pen's National Rally in France and Matteo Salvini's Northern League in Italy are expected to perform well in the European Parliament elections. Szijjarto did not rule out the possibility of linking up with Le Pen and Salvini.

Chancellor Angela Merkel's decision to open Germany's doors to migrants in 2015 split the EPP bloc between pro- and anti-immigration factions.

The EPP currently has 217 lawmakers in the 750-strong EU legislature, and 12 of them are from Hungary's ruling party.

The future of the coalition will be at stake in the European parliamentary election, taking place until Sunday.

Szijjarto has dubbed the May 26 European Parliament vote as the most significant the 28-nation bloc has ever held, as it offered two distinct versions of its future.

"After the (European parliamentary) elections, it will be obvious who has a bigger influence on the decision making in the EPP," Szijjarto told DPA news agency earlier this month.

"In order to make (Europe) strong again, we need strong member states and we absolutely dislike the concept of a so-called United States of Europe," he said on the sidelines of an OECD ministerial summit in Paris.

"We would rather represent a sovereign approach and would like to end up with an EU based on strong member states, which stick to their religious and cultural history," he added.