India and Russia have announced a major arms deal, violating US sanctions. Energy sector sources also say New Delhi will purchase 9 million barrels of Iranian oil. Both moves will test India's relations with the US. 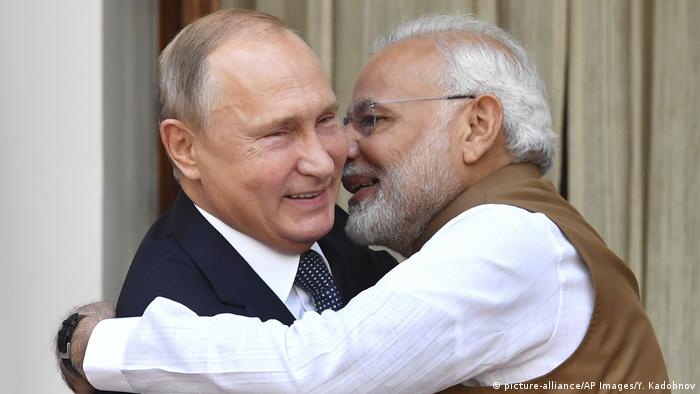 There were hugs, smiles and warm words between Indian Prime Minister Narendra Modi and Russian President Vladimir Putin as the two held a press conference in New Delhi on Friday. Although a number of trade deals — including rail, space and nuclear technologies — were publicly signed during Putin's two-day visit, the most spectacular and controversial agreement was penned away from the cameras.

In that deal, India agreed to buy more than $5.2 billion (€4.5 billion) worth of Russian-made S-400 surface-to-air missile systems, a move that directly defies US sanctions on the purchase of Russian military hardware.

In September, the US slapped sanctions on China for its purchase of Russian fighter jets and S-400 systems. In August, the US State Department said that future sanctions would specifically focus on the S-400 system as Washington made clear that trade with Russia's military and intelligence sector would be punished with automatic sanctions under the Countering America's Adversaries Through Sanctions Act (CAATSA).

India would seem to be banking on the US exempting it from penalty due to its strategic importance as a counterweight to Chinese dominance in Southeast Asia. Prime Minister Modi and US President Donald Trump are also known to have a close relationship.

Initial US reaction from its embassy in New Delhi was cautious, stating that sanctions were designed as a punishment for "malign behavior," and not to "impose damage to the military capabilities of our allies and partners." The embassy noted that sanctions waivers would be reviewed on a "transaction-by-transaction basis."

An important part of a complicated puzzle

The US is an important trading partner for India and the two countries have also pledged to work more closely on defense. Last month the two announced joint military exercises to be held in 2019 as well as agreeing to the exchange of sensitive military information.

The balance of power in the region is complicated, with India and China facing off as adversaries, such as during a tense military showdown last year in the Himalayas, yet China has also made attempts to gain Indian trust as a way of keeping New Delhi from being drawn too closely into the US sphere of influence. This was evident when Prime Minister Modi traveled to China to meet with President Xi Jinping in April.

Although Modi did not mention military cooperation in his remarks alongside Putin, the Russian president emphasized it as an "important part" of Russian-Indian relations. Russia, historically a close ally of India, remains its largest military supplier. The United States is India's second largest supplier of military hardware, having sold New Delhi some $15 billion worth of arms over the last decade.

Trade between Russia and India, however, has declined of late as India has leaned more heavily on the US and Russia has cozied up to China and Pakistan — both of which New Delhi sees as strategic competitors.

Voices at the two-day summit were optimistic. Andrei Kostin, the president of the Russian state bank VTB, said India and Russia "have a strategic partnership and a very harmonious dialog at the political level but we have to complete this with the strengthening of economic ties."

In another move that is sure to draw ire from Washington, sources in India's energy sector told Reuters news agency on Friday that the country will purchase 9 million barrels of oil from Iran this November. New US sanctions targeting Tehran's oil industry are set to go into effect on November 4. The sanctions are part of Washington's efforts to isolate Iran, which it claims is "the world's leading state sponsor of terrorism."

Although the 9 million barrel figure represents a drop in Indian imports of Iranian oil — 10 million barrels were imported in October — New Delhi does not seem likely to stop imports altogether. In May, Foreign Minister Sushma Swaraj said "India follows only UN sanctions and not unilateral sanctions by any country."

India has also been critical of US President Trump's decision to pull out of the Joint Comprehensive Plan of Action (JCPOA), otherwise known as the Iran nuclear deal, as Iranian isolation threatens India's long-term strategic partnerships with the Islamic republic.

One of the largest such partnerships is represented by the Chabahar port development project on the Gulf of Oman. India has already invested $500 million in the project, which is scheduled to be operational in 2019. International isolation of Iran could put the port at risk.