China vows 'consequences' over US sanctions on Russian weapons purchase

Washington's decision to impose sanctions on the Chinese military over their purchase of Russian fighter jets has left Beijing and Moscow fuming. Russia has accused the US of trying to suppress economic competition. 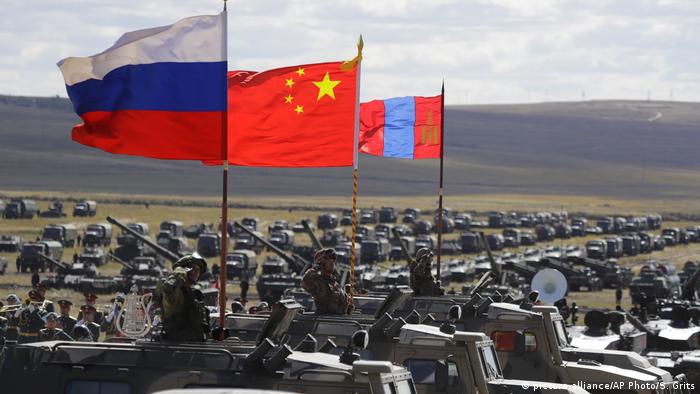 Chinese officials demanded on Friday that the United States cancel its economic sanctions against a Chinese military agency over a Russian weapons purchase.

Foreign Ministry spokesman Geng Shuang said that Beijing was "strongly outraged" over the decision and had logged several formal complaints.

"We strongly urge the US to immediately correct the mistakes and revoke the so-called sanctions; otherwise the US must bear the consequences," he warned.

Russia also criticized the move, accusing Washington of attempting to suppress economic competition, particularly as Russia is the world's second-largest weapons exporter behind the US.

The economic sanctions are "chiefly due to the fact that we produce large volumes of competitive products," Russia's trade minister, Denis Manturov, told reporters.

On Thursday, the US added China's Equipment Development Department and its director to a sanctions blacklist. Another 33 Russian intelligence and defense officials were also set on the blacklist.

The sanctions trigger a ban on the individuals from entering the US, forbid them from transactions with the US financial system and block all property that is within US jurisdiction.

According to the US, China's purchase of Russian jets and surface-to-air missile equipment violated a 2017 law that was intended to punish Russian President Vladimir Putin's government for interfering in the 2016 US elections.

US President Donald Trump's government has imposed tariffs on Chinese products worth billions in recent weeks, with China vowing to retaliate. The two countries will launch new tariffs on Monday, with Washington taking aim at $200 billion (€170 billion) in Chinese exports and Beijing hitting $60 billion worth of US products.

Russia and China are forming closer economic and strategic relations in the face of increasing pressure from Washington. Although a Sino-Russian bloc sounds ominous to the West, there are big obstacles to an alliance. (14.09.2018)