The latest US salvo against China has escalated the threat of a trade war between the world's two largest economies. China has responded by announcing countermeasures affecting up to $60 billion worth of US exports. 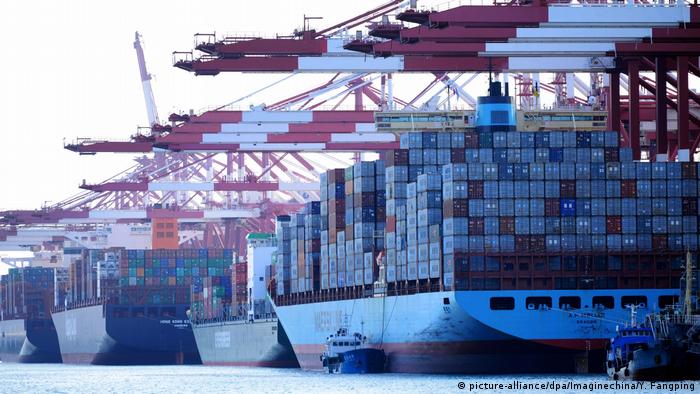 The United States has announced fresh tariffs on $200 billion (€171 billion) worth of Chinese goods, spooking markets worried about an escalating tit-for-tat trade war between the world's largest economies.

The Trump administration said Monday that tariffs would start at 10 percent next week and increase to 25 percent starting January 1.

Washington has already imposed 25 percent duties on $50 billion of Chinese goods over what it alleges are unfair trade practices. With the new tariffs, about half of China's imports to the United States are covered by punitive trade measures.

On Tuesday, China retaliated by announcing it was hiking duties to between five and 10 percent on $60 billion worth of US imports.

"To protect its legitimate rights and interests and order in international free trade, China is left with no choice but to retaliate simultaneously," China's Commerce Ministry said in a statement earlier on Tuesday. Officials declined to say what goods would be targeted, but an earlier list released by the Finance Ministry included products such as coffee, honey and industrial chemicals.

A spokesman for China's foreign ministry said that talks are the only way to resolve trade issues the US, but that such discussions must be held on equal footing.

The new tariffs are due to come into effect on September 24.

China has already imposed retaliatory tariffs on $50 billion worth of US goods in response to Washington's previous measures. However, because China exports more to the US than it imports there are limits on the amount of tariffs Beijing can impose on American goods. This has raised concerns that China could retaliate with non-tariff trade measures.

Trump, in turn, said Beijing's retaliation was spurred by its desire to influence the upcoming US mid-term elections and target the president's rural support base. "China has openly stated that they are actively trying to impact and change our election by attacking our farmers, ranchers and industrial workers because of their loyalty to me," he tweeted.

Trump also warned that any Chinese response "will immediately pursue phase three, which is tariffs on approximately $267 billion of additional imports." That would cover almost everything China imports to the US.

US in a very strong bargaining position: Trump

"Tariffs have put the US in a very strong bargaining position, with billions of dollars, and jobs, flowing into our country — and yet cost increases have thus far been almost unnoticeable," Trump said on Twitter.

US industries have generally opposed tariffs, arguing they increase prices for consumers and could hurt economic growth.

In China, the yuan currency has seen a 10 percent depreciation since Trump first threatened to launch a trade war with China in March, thereby mitigating any immediate threats to the latest swathe of tariffs. However, analysts do fear what the long-term repercussion may be.

"The main influence on the Chinese economy is its future prospects," Chinese economics professor Shen Ling told DW. "This is where Trump knows how to apply his 'art of the deal.' His repeated threats and pronouncements actually have a far worse impact on China than the actual tariffs."

Ling added: "This is particularly evident in the performance of the Chinese stock market, which generally reflects future expectations. And we are already seeing the effects of this pessimistic mood."

Officials from the US and China have met several times to address trade issues, most recently in August, but were unable to make much progress.

Opinion: Let's just call it by its name — a winnable trade war

The tariff tiff between China and the US has reached levels unimaginable a year ago. But China is running out of ammunition and the global trade regime may be on the brink of big change, says DW's Timothy Rooks. (18.09.2018)

Fresh US-China trade talks in the making as tariffs loom

Washington has invited Chinese officials to restart trade talks under efforts to defuse an escalating trade dispute. The offer comes as US President Donald Trump is readying new tariffs to be slapped on Chinese goods. (13.09.2018)

Tumbling emerging market currencies, including the Russian ruble, have caused Moscow to publicly wish for the "demise" of the greenback from global finance. Lars Halter examines how realistic such a wish actually is. (16.08.2018)

The US has announced its plan to launch trade talks with Taiwan in a new sign of support and despite soaring tensions with China over the self-ruled island.