Russia's largest military training exercises since the Cold War are taking place in the country's far east. China is participating, but what type of war is Moscow training for and who is playing the enemy? 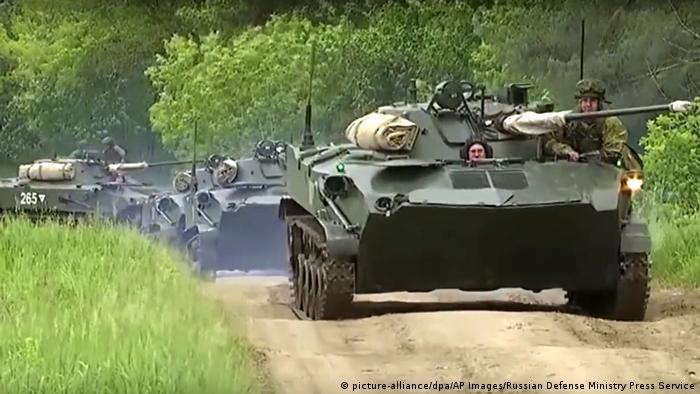 Multiple Russian divisions, including the Pacific and northern fleets, are participating in the Vostok 2018 war games from September 11 to 17. The military training operation is set to eclipse the Soviet Union's largest-ever exercise, held in 1981. About 300,000 troops, 1,000 aircraft, 36,000 combat vehicles and as many as 80 ships will be involved, according to Russia's Defense Ministry.

The drills will take place across five training areas, as well as the Sea of Japan, the Bering Sea and the Sea of Okhotsk.

German observers such as European Council on Foreign Relations (ECFR) Senior Policy Fellow Gustav Gressel, are hardly surprised. The Russian military trains "in another strategic direction" every year, he told DW, whether south, west or east. "It is Vostok's (Russian for east) turn again. It is part of the regular maneuver plan," he said.

No limits in east

The scale of the war games is no shock either, said Sarah Pagung, a Russia expert for the German Council on Foreign Relations (DGAP). "The military exercises in the east are always larger than they are in the west because the Vienna Document limits troop sizes in the west, which isn't the case in the east," she told DW.

The Vienna Document agreement on conventional armed forces among members of the Organization for Security and Co-operation in Europe (OSCE) was adopted in 1990 and last revised in 2011. The aim is to ensure confidence and security building regarding members' military capabilities and limits Russian troop deployments in western Russia.

The size of this year's eastern war games may also have to do with the operation's goal, Pagung said. "Looking at which and how many troops are involved, it's clear that Russia is training for world war," she said, adding that Russia's western forces have also been mobilized.

Experts have taken particular note of China's involvement this year, although with comparatively few troops: Just 3,000 soldiers along with aircraft and helicopters. Russia and China have trained together about 30 times since 2003, but this is the first time China has participated at a strategic level. That honor has so far been reserved only for close allies, such as Belarus during the 2017 Zapad maneuvers in western Russia.

As a direct neighbor, Gustav Gressel said, China has had a long-held desire to be invited to the "hardcore military" part of the exercise, not just for police or counter-terror training. This year, that wish has come true. China may have the more modern equipment, he added, but it is "far behind Russia in terms of officer training, and the movement, deployment and command of troops."

China is also looking to profit from Russia's wartime experience in Syria and Ukraine, Gressel explained. Their main emphasis is on officers being able to look over their Russian counterparts' shoulders. "This is also part of the modification process of their own training, getting cadets away from large-scale infantry wars and towards technical warcraft for the information age," he added.

Worst case for the US?

Closer military ties between Russia and China are a "nightmare" for the US, according to Gressel. Economic, and now military cooperation between the two major powers has been growing for some time. "For Russia's leadership, security is about securing the regime," Gressel said. The US-led West is seen by the Kremlin as the main enemy, and the appeal of Western culture a danger. Although China could pose the larger military threat, Gressel said it does not threaten Russia's internal stability the same way.

"China is therefore not the strategic challenger. It is always the West," he said.

Sarah Pagung from DGAP disagrees with the "nightmare" claim. "It is clearly a show of force by Russia to the US as well as something of a perception of superpower status," she said. "But these sorts of maneuvers are relatively normal for all major powers."