Germany's top spy, Bruno Kahl, has delivered a dramatic warning about Russia's military ambitions in the European Union. But some analysts think that such alarmism only plays into the Kremlin's hands. The president of Germany's foreign intelligence agency, the BND, has delivered his starkest warning yet about Russia's growing power. Speaking at the Hanns Seidel political foundation in Munich on Monday, Bruno Kahl outlined Russia's growing ambitions and questioned whether the European Union's defense capabilities are adequate.

Kahl said the BND had observed "unsettling" modernization and troop distribution on the part of Russia's army during the recent Zapad training exercises along the borders of the Baltic EU member countries. "In the entire military region in the west, but also in the south and the north, the scope of the armed forces has reached new heights," he said.

He also said the Kremlin was aiming to take a leading role on the European continent again. "Part of that is weakening the EU and pushing the US back and especially driving a wedge between the two," Kahl said. "To say it clearly: Instead of a partner for European security we have in Russia a potential danger. The world political actor Russia is back — and it will be an uncomfortable neighbor." Bruno Kahl says Russia is going to be an "uncomfortable neighbor"

Kahl's speech is being read as an unusual intervention by a figure who rarely makes his analyses public. The BND chief said it was imperative that German and European secret services work closely with their US counterparts.

"As president of the BND, I should say that the cooperation with the American intelligence agencies is an essential part of our power," Kahl said, before pointing out that the United States is the only nation with troops stationed on the world's three most critical geopolitical fronts: Eastern Europe, the Persian Gulf and East Asia.

The question that NATO and the international community at large needs to ask, Kahl said, is "whether their own defense and arms capabilities are sufficient."

The United States has "10 aircraft carriers that can be sent to international conflict zones in the shortest time," Kahl said. The US also has about 34,000 soldiers stationed in Germany, which "shows how tight the security bond between Berlin and Washington still is," he added. "It is only with the US that Europe will manage in the next few years to provide a credible counterweight to Russia on Europe's eastern flank."

"We are not talking enough about Russia's behavior towards the West, Europe and the Eastern European countries in particular, in the mainstream public sphere," Schulte said. "There is a low-intensity shooting war going on between Russia-backed forces and Ukraine, and the lack of public analysis that goes beyond the mere reporting of events is astounding." 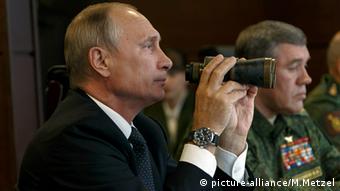 Vladimir Putin is looking to drive a wedge between the EU and the US, Kahl says

Mark Galeotti, senior researcher and head of the Centre for European Security at the Institute of International Relations Prague, believes that some of Kahl's observations could be true but said the overall argument was "framed in alarmist terms."

"Is it clear that Russia is much more assertive and aggressive and is it trying to essentially neutralize Europe? Yes, that's accurate," Galeotti said. "But I must admit I was surprised at the emphasis on the military dimension and the implication that Russia is a direct military threat, because that's inaccurate."

Galeotti pointed out that although the Kremlin is boosting its armed forces, Russia still likely has a long way to go before it catches up to NATO. "At least half the Russian military is still not properly modernized," he said. "And, what's more, if you look at European NATO countries, without thinking of the US and Canada, they have more ground troops than Russia has." Galeotti also pointed out that Russia has reduced its defense budget by 7 percent in the past year, and that the vast country is operating with an economy smaller than Germany's.

In Galeotti's analysis, Russia can realistically mobilize about 50,000 troops at any one time. "This is not the Soviet Red Army," he said. "This is not a force that could crash into Western Europe and take on NATO and expect to win."

Galeotti said there was an irony to such statements by figures of authority like Kahl. "When I talk to people I know in the Russian military, there is a degree of exasperation about how the West is alarmist about Russian intent and capacity," he said. "But there is also a degree of satisfaction, because the more Russia is played up as this great power with these phenomenal capabilities, that makes Russia more powerful. This kind of talk plays into Moscow's hands."

For the first time in Germany, top intelligence officials will publically answer questions in front of a parliamentary committee. The hearing is part of a government push to take the agencies "out of the grey zone." (05.10.2017)