US NATO ambassador to press Russia on Zapad troop numbers | Europe | News and current affairs from around the continent | DW | 24.10.2017

US NATO ambassador to press Russia on Zapad troop numbers

NATO ambassadors will meet their Russian counterpart to discuss a range of issues, including recent joint Russian-Belarusian war games. Western estimates say troop involvement was much higher than the Kremlin reported. 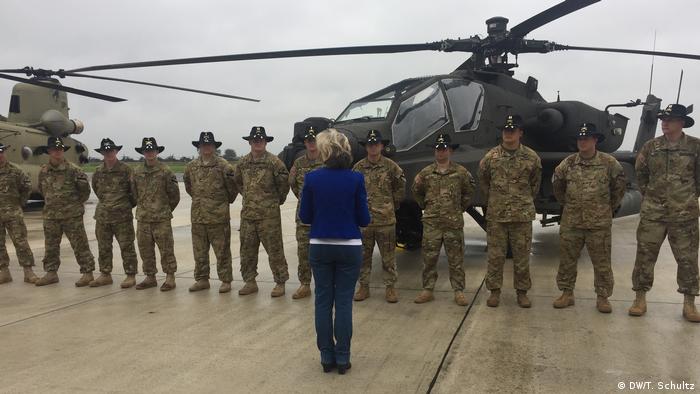 Former Texas senator Kay Bailey Hutchison gave a transplanted hometown welcome to Fort Hood troops visiting Belgium on Tuesday in her new role as the US ambassador to NATO. Almost 2,000 personnel plus 89 helicopters and hundreds of pieces of equipment from the 1st Air Cavalry division stopped over at Chevres Air Force Base on their way to Illesheim, Germany and then on to Latvia, Poland and Romania. They're on a nine-month stint to support Operation Atlantic Resolve, the largest buildup of troops in Europe since the end of the Cold War, launched after Russia annexed Ukraine's Crimea region in 2014.

Hutchison thanked the troops for providing backup to NATO, especially at a time when she said Russia's most recent military maneuvers, the Zapad exercises that took place in September, appear to have been aimed at Moscow  demonstrating its military power to the alliance. Russia insisted repeatedly that Zapad would involve fewer than 13,000 personnel, the number at which the Kremlin would have been obligated under the international OSCE agreement known as the "Vienna document" to allow observers. Open-source reporting indicates the size was some eight times that figure and Hutchison says she'll be calling out the Kremlin on the disparity when NATO ambassadors meet their Russian counterpart Thursday. The last NATO-Russia Council took place July 13, before Zapad commenced.

"I will certainly be making the point that there was a lack of transparency on Russia's part about what they said they were going to do and what they actually were doing," the ambassador said. "They said it was going to be counterterrorism [drills] but it was much more comprehensive than that."

Hutchison wouldn't comment directly on reports of a leaked confidential NATO document casting doubt on the alliance's ability to effectively repel a Russian attack, but she did say the next defense ministers' meeting in November would be addressing longstanding US concerns about troop mobility across European borders.

"One of the key areas that has been recognized by our Supreme Allied Commander is that we've got to be able to get through Europe very quickly and very efficiently," she explained, pointing out that the Fort Hood troops had been able to come off ships in Zeebrugge and make it to Chevres a full day more quickly than anticipated. "It's something that we know is important for us and we're working on it," she added.

US Army Commander Gen. Ben Hodges has told DW the red tape causes him to worry he couldn't summon sufficient forces in the event of a Russian snap exercise that demanded an allied response. While a declaration of a major threat could invoke a different set of rules facilitating speed, Hodges would like to see all of Europe implement a system by which permission to cross territory would be received within 48 hours alliance-wide.

Lt. Col. Don Peters confirmed the massive effort it takes just to manage the bureaucracy of transporting military assets across European borders, saying they can often wait 30 days to get a go-ahead.

Carnegie Europe analyst Judy Dempsey says the reason Europe is dragging its feet on creating a more efficient mobility plan is because the alliance doesn't have a shared perception on the threat caused by Russia.

Dempsey doesn't have much hope that Thursday's NATO-Russia Council will produce a convergence of views on the agenda, which includes Ukraine, Afghanistan and aviation security. She'd like to see NATO robustly stand up to Russia and say it's putting more troops on its eastern border — and permanently.  "I don't know why we're hiding in our own shadow," Dempsey told DW.  "These are NATO members and if they want more security they should be given it, frankly."

As Russia's invasion stalls and Putin's army aims at civilians, the voices for intervention become louder. Kyiv wants a cease-fire, but what kind of deal could be reached with Moscow as it stands accused of war crimes?