India and Pakistan ratchet up war rhetoric over Kashmir

The Indian and Pakistani governments have accused each other of sabotaging peace talks in the latest spat over militancy in the Kashmir region. But where did it all go wrong for the proposed foreign ministers' meeting? 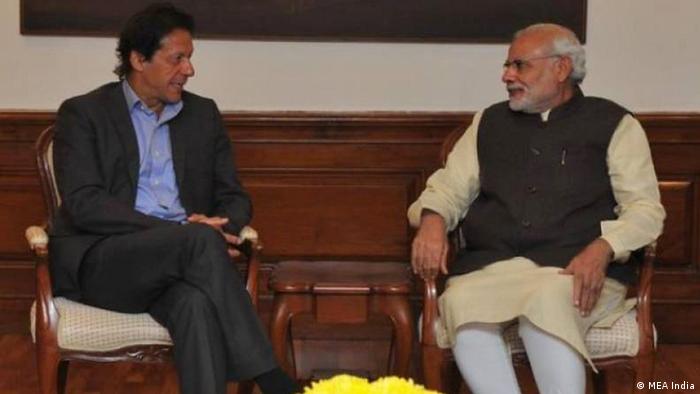 India recently canceled a proposed meeting between Foreign Minister Sushma Swaraj and her Pakistani counterpart, Shah Mahmood Qureshi, which was set to take place on the sidelines of the annual UN General Assembly debate later this month.

The Indian foreign ministry said Friday it cancelled the talks following the "latest brutal killings of our security personnel by Pakistan-based entities" in Kashmir, and the release of a series of Pakistani postage stamps "glorifying a terrorist and terrorism."

Earlier this week, Kashmiri militants reportedly killed a border guard and mutilated his body in the India-administered Kashmir. On Friday, three policemen were then found dead after being abducted in the same area.

Reacting to New Delhi's move, Khan hit back at India on Twitter, calling it "arrogant."

"Disappointed at the arrogant and negative response by India to my call for resumption of the peace dialogue," he wrote. "However, all my life I have come across small men occupying big offices who do not have the vision to see the larger picture."

Kashmir remains a bone of contention

Political commentators and social media users in Indian and Pakistan are now debating who is to blame for the cancellation of the planned talks.

While some Pakistanis argue India disrespected diplomatic protocol by pulling the plug on a meeting it had previously agreed to, Indians say that Pakistani Prime Minister Khan is backing terrorists.

New Delhi says it canceled the talks following the July release of Pakistani postage stamps commemorating Burhan Wani, a Kashmiri militant shot dead by Indian troops in 2016. Analysts say it was only after the state-run Associated Press of Pakistan news agency ran a story on Wani's stamps that New Delhi decided to cancel the proposed meeting.

Since 1989, Muslim insurgents have been fighting Indian forces in India-administered Kashmir — a region of 12 million people, about 70 percent of whom are Muslim. India and Pakistan have fought two of their three wars since independence in 1947 over Kashmir, which they both claim in full, but rule in part.

But Shireen Mazari, Pakistan's minister for human rights, says India was never interested in forging peaceful ties with her country.

On Saturday, Indian media quoted army chief Bipin Rawat calling for "stern action to avenge the barbarism that terrorists and the Pakistan Army have been carrying out."

In response Pakistan's military spokesman said his country was "ready for war."

"We are a nuclear nation and we are ready for war but in the interest of the people of Pakistan and the neighbors and the region we want to walk the path of peace," Major General Asif Ghafoor told local media.

"The statement from the Indian army chief is irresponsible," he added.

Some Indian and Pakistani analysts say Khan's twitter response to the cancellation of the foreign ministers' meeting was "uncalled for" and "undiplomatic."

Commentators also picked on Khan's dig at Indian Prime Minister Narendra Modi and said that Khan has no right to criticize the Indian premier when he himself is a "powerless" leader, and a "puppet" in the hands of his country's military generals.

Liberal analysts in Pakistan accuse their military of rigging the July 25 general election in Khan's favor in order to keep former Prime Minister Nawaz Sharif our of power. Experts say Sharif became a threat to his generals due to his moves to improve ties with New Delhi.

Pakistan's military establishment considers India to be the biggest threat to the country's security.

Khan has largely supported the military's narrative on India and Afghanistan, a country where New Delhi has increased its clout in the past decade.

Some are also of the view that Khan, a populist politician who came to power to bring about a radical change to governance, has not lived up to expectations since taking charge as prime minister last month. War rhetoric against India is a tried and tested formula to distract the public, they say.

The same could be applied to Indian Prime Minister Modi, who seeks to be re-elected next year.

Controversy over a jet deal with France has also piled pressure on Modi.

On Saturday, India's opposition accused Modi of corruption over the 2016 Rafale jet deal. The charge comes after French ex-President Francois Hollande said Modi asked Paris to pick an Indian billionaire as partner in the deal.

Peace activists in India and Pakistan are urging their governments to restart peace talks and bury the hatchet. They say the dispute over Kashmir and terrorism has held back the progress of the two countries for decades.

While former Pakistani Prime Minister Sharif and his Indian counterpart, Modi, were largely on the same page over the economic benefits of an Indian-Pakistani friendship, Khan has yet to come out with a comprehensive plan on the issue.