The myth of austerity: Why PM Imran Khan′s populism won′t solve Pakistan′s woes | Asia | An in-depth look at news from across the continent | DW | 31.08.2018

Moving into a small house instead of using the prime minister's office, and spending less money on security — PM Khan's measures are commendable. But economists say Pakistan needs serious efforts to improve the economy. 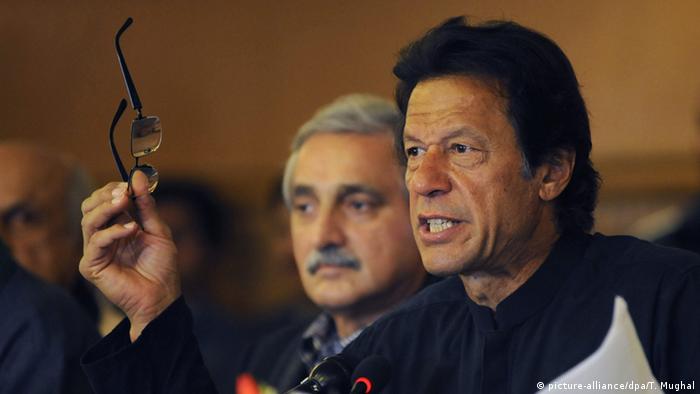 Amid fears that the cash-strapped country could soon face a financial precipice, Prime Minister Imran Khan's newly elected government has launched an austerity drive to avoid Pakistan going to the International Monetary Fund (IMF) for a financial bailout.

The drive, which involves less government spending on VIP protocols, has created a ripple of excitement among the citizens, who have long criticized the past leaders' lavish lifestyle.

But economists say the government's austerity campaign is not more than a populist stunt that amounts to misleading people on how the government intends to deal with serious economic issues.

It is not the first time that a Pakistani head of government has launched an austerity drive. In the early 1980s, ex-military dictator General Zia promoted the idea of "Islamic simplicity" as opposed to liberal governance. Former premiers Mohammad Khan Junejo and Nawaz Sharif also publicized their austerity measures in the late 1980s and the 1990s, respectively. All these efforts did not yield any substantial result.

The country's trade deficit is also skyrocketing — $37.7 billion in the 2018 fiscal year. In the same fiscal year, Pakistan spent a whopping $60.9 billion on imports, with a big chunk going to the import of machinery for the China-led multibillion-dollar Pakistan-China Economic Corridor (CPEC) infrastructure development initiative.

Pakistani businessmen complain that the government is giving preferential treatment to Chinese companies, whose cheaper products have flooded Pakistani markets and crippled their businesses.

But instead of chalking out a comprehensive economic plan, the cricketer-turned-politician Khan said in his first speech to the nation as PM that he would force government officials to spend less. After becoming prime minister, Khan said he would be moving into a three bed-room house instead of the large prime minister secretariat, and would also cut down other official expenses.

But Khan's Pakistan Tehreek-e-Insaf (PTI, Movement for Justice) party says that the premier has sent a strong message to government officials and bureaucrats that their "luxurious lifestyle" will not be tolerated by the new leadership.

"The main thing is to restore people's confidence in the government. The Pakistanis are generous people and they gave a lot of donations to Imran Khan [for his cancer hospital]. They did so because they trust him. And because they have faith in their prime minister, I'm sure they will also pay taxes," Senator Faisal Javed Khan, Khan's close aide, told DW.

Interestingly enough, Khan did not say anything in his speech about the military budget — the second-largest government expense.

Pakistan, which borders Afghanistan, Iran, China and India, spends massively on defense. The military cites external and internal security threats as reasons for this expenditure. The country's defense budget is now close to $12 billion per year and many experts believe it is disproportionate to the size of Pakistan's economy.

"Pakistan is a security state whose parliament never debates the defense budget. The military's expenditure does not even go through a parliamentary audit," Muhammad Ziauddin, former editor of the Express Tribune English newspaper, told DW.

"The military generals are running hundreds of businesses in the country, yet they pay very little tax. Understandably, Khan's austerity drive does not cover the generals' luxurious lifestyle. If the new government really wants to turn things around and improve the economy, then it should reduce the mammoth military budget and impose taxes on the military's economic empire," Ziauddin added.

Economist Azra Talat Saeed is of the view that no civilian government is powerful enough to confront the military on the defense budget.

"It is even difficult to get the exact defense budget figures because there is an official defense budget and then there are also 'undisclosed' expenses," Saeed told DW.

PTI's Senator Faisal Javed Khan disagrees that the government is reluctant to take on the army. He says that PM Khan's austerity drive will gradually cover all state institutions.

Some economists and political analysts suggest that while Pakistan's ties with the United States have been tense for quite some time, the country's regional ally China could come to the help of the new government.

But economist Saeed says it would be unwise to rely on China. "China may bail us out but the help won't come without conditions. We have already taken huge loans from China. And trust me that Beijing knows how to take back these loans. For example, Sri Lanka was not able to pay back its loan, so China negotiated a long-term land lease with Colombo, which amounts to arm-twisting," she said.

There is a near-consensus among economists that the Pakistani government will have to approach the IMF for an economic bailout. But the Trump administration's stance toward Pakistan could make the loan difficult. Washington, which has the biggest share in the IMF, has warned that Islamabad must not use Western money to repay its Chinese loans.

The question of Western financial aid is also linked to the Trump administration's demand that Islamabad reins in jihadist organizations that are active on Pakistani soil. But Imran Khan has been explicit about his position on Afghanistan and the Taliban. The newly elected premier blames the US intervention in Afghanistan for the rise of extremism in the region and demands that international troops must exit the war-torn country. He also advocates a political solution to the Afghan conflict.

Khan and the Pakistani military generals are on the same page about the terrorism issue — that Pakistan is not responsible for the problem. Since coming to power, Khan has not spoken about the issue of home-grown jihadism and how he plans to deal with it.

Keeping in mind these conflicting approaches toward the terrorism issue, it is unlikely that the US would ease economic restrictions on Pakistan anytime soon.

While local and international media have been focusing on the tug-of-war between former PM Sharif and Pakistan's military, extremist parties are gaining strength in Punjab province. Shamil Shams reports from Lahore. (23.07.2018)