With its economy in distress, Pakistan's new government is expected to soon go cap in hand to the IMF seeking yet another loan. But US Secretary of State Pompeo's recent comments highlight the tough road ahead. 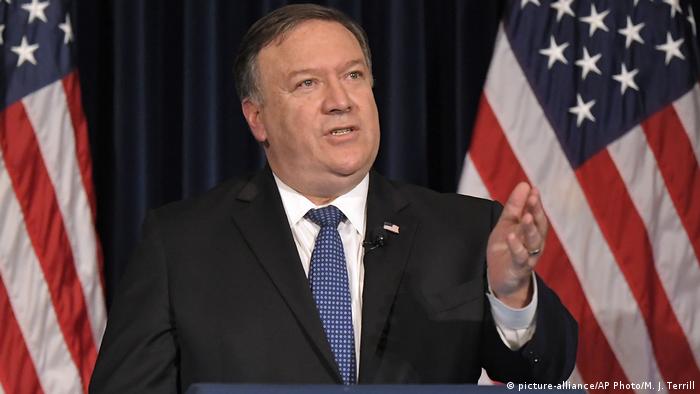 Regardless of the political challenges he may encounter, the prime minister in waiting and his government will have their work cut out when it comes to tackling the difficulties the Pakistani economy is grappling with.

The country's foreign exchange reserves, meanwhile, are dwindling, plummeting to just over $9 billion now from $16.4 billion in May 2017. The central bank has been forced to devalue the currency thrice since December. Rising global crude prices present another challenge, as Pakistan imports about 80 percent of its oil needs.

IMF to the rescue, again?

Creating enough employment opportunities for the nation's over 200 million people will also be a daunting task for the government. Experts say Pakistan needs to generate 2-3 million jobs annually, and that would require measures to ensure security, cut bureaucratic red tape, improve ease of doing business and strengthen the nation's manufacturing industry, among other things.

"Pakistan is facing the biggest economic challenge in the country's history," Khan said in his victory speech.

Economic problems over the past three decades have repeatedly forced Islamabad to knock on the doors of the International Monetary Fund (IMF) seeking assistance. Since 1980, Pakistan has had 14 IMF financing programs, according to fund data, including a $6.7 billion three-year loan program in 2013.

Many inside and outside Pakistan expect Islamabad to once again seek IMF's financial help. A loan from the Fund could help the country close its external financing gap temporarily and avert an economic catastrophe.

"Pakistan urgently needs $10-15 billion. We have no other option but to reach out to the IMF for loans," said Muzzamil Aslam, a financial analyst.

But recent statements made by US Secretary of State Mike Pompeo about any potential IMF bailout of the country have underlined the difficulties the Pakistani government would face in accessing IMF funds this time around.

In an interview with CNBC, Pompeo said the United States looked forward to engagement with the government of Pakistan's expected new PM, Imran Khan, but said there was "no rationale" for a bailout that pays off Chinese loans to Islamabad.

"Make no mistake - we will be watching what the IMF does. There's no rationale for IMF tax dollars - and associated with that, American dollars that are part of the IMF funding - for those to go to bail out Chinese bondholders or - or China itself," Pompeo said.

His comments were in reference to Pakistan's involvement in China's mammoth Belt and Road Initiative (BRI), an ambitious $1 trillion infrastructure project that aims to bolster China's trade and investment links with economies in Asia, Africa and Europe.

Pakistan is estimated to have already received over $5 billion in bilateral and commercial loans from China this fiscal year. And Beijing is also pumping billions into the South Asian country as part of the China-Pakistan Economic Corridor (CPEC). The multibillion-dollar initiative, part of BRI, is aimed at modernizing Pakistan's infrastructure by building and expanding ports, railways, power plants and other physical infrastructure.

While the initiative's proponents view CPEC, valued at over $60 billion, as a positive force that could transform and boost the Pakistani economy, detractors say it will turn Pakistan into China's "economic colony."

Following Pompeo's remarks, China on Tuesday said it expects the IMF to follow its own rules and standards when providing funds to countries. "I believe they will handle it properly," Chinese Foreign Ministry Spokesperson Geng Shuang said.

The Chinese government has also repeatedly refuted the claims that its BRI scheme has saddled a number of developing countries with excessive and unsustainable debt.

Shi Yinhong, a professor of international studies at the Beijing-based Renmin University of China, told DW that Pompeo's statements showed that the US wants to put pressure on countries relying on Chinese money to develop their infrastructure.

The US, he said, is joining forces with countries like the US, Japan, Australia and India, in a bid to counter Beijing's growing economic clout. "The 'Indo-Pacific' alliance, including these countries, has so far been mainly strategic, but now they're also looking to develop an economic component," Yinhong said.

The US secretary of state's remarks have also caught the attention of Pakistanis. US President Donald Trump's administration is trying to impose "harsh conditions on Pakistan" as part of its efforts to "harm China's interests," said Ikram Sehgal, a defense and security analyst.

"The US generally tries to influence the economy and politics of developing countries," he stressed, adding that Washington's ongoing trade spat with Beijing meant nations like Pakistan would come under growing American pressure to move away from China and side with the US.

In order to escape the repeated boom-and-bust cycles and improve Pakistan's financial position, experts say the new government will have to undertake an array of structural reforms. They include reforming the nation's state-run firms as well as furthering liberalizing the product and labor markets.

However, it's uncertain at present whether the new government in Pakistan would be up for the task.

US aid cut: Why Pakistan shouldn't rely on China

After the suspension of US security assistance, Pakistan's dependence on its longtime ally China is bound to increase. But analysts say it would be a double-edged sword and comes with its own problems. (05.01.2018)

The inclusion of Afghanistan in the China-Pakistan Economic Corridor would boost the country's economy, but its implementation will be difficult for Beijing without regional consensus and a green light from the US. (10.01.2018)