Can Afghanistan join China-Pakistan Economic Corridor? | Asia | An in-depth look at news from across the continent | DW | 10.01.2018

The inclusion of Afghanistan in the China-Pakistan Economic Corridor would boost the country's economy, but its implementation will be difficult for Beijing without regional consensus and a green light from the US. 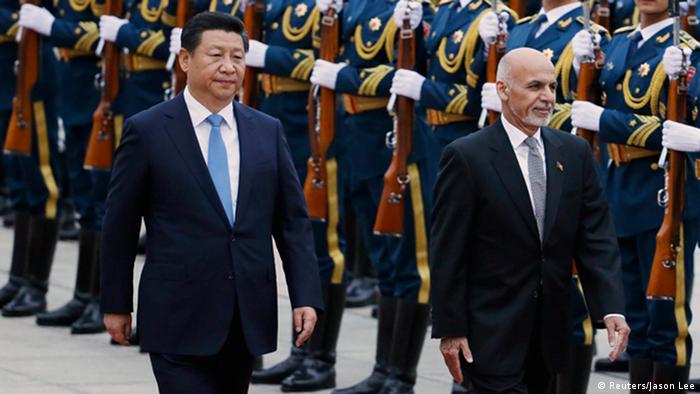 The Chinese government says it is willing to bring Afghanistan into its nearly 60-billion-dollar China-Pakistan Economic Corridor (CPEC) project.

"China and Pakistan are willing to discuss with Afghanistan, under the principle of mutual benefits, the possibility of extending the China-Pakistan Economic Corridor to Afghanistan," China's Foreign Minister Wang Yi told reporters last month after holding talks with his Afghan and Pakistani counterparts in Beijing.

Kabul's potential inclusion in the project could prove to be beneficial for the war-torn country, whose government aims to boost regional trade and connectivity. The CPEC could help Afghanistan reduce its dependence on foreign aid as well as provide both Kabul and Islamabad with an opportunity to improve ties.

Beijing, a close Islamabad ally, has urged Pakistan and Afghanistan to improve relations, which have deteriorated in the past few years over the issue of Islamist militancy and terrorist "safe havens" inside Pakistan.

"Afghan involvement in CPEC, even if only modest, can be a big confidence-building measure for an Afghanistan-Pakistan relationship that is never warm," Michael Kugelman, a senior associate for South and Southeast Asia at the Washington-based Woodrow Wilson Center for Scholars, told DW. 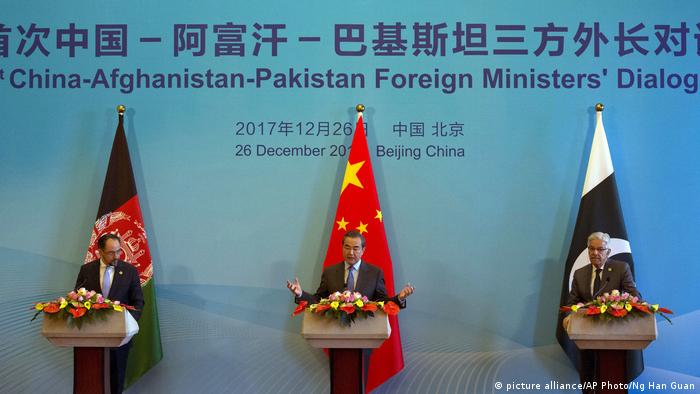 Beijing has urged Pakistan and Afghanistan to improve their ties

But the potential CPEC expansion to Afghanistan would be a difficult task mainly because Afghanistan-Pakistan relations have become hostile since President Ashraf Ghani came to power in late 2014. Both countries accuse each other of backing jihadists to undermine each other's governments.

Ties between the two neighboring countries that share a long border deteriorated even further after US President Donald Trump announced his strategy for Afghanistan and Pakistan in August last year. The Trump administration has mounted pressure on Islamabad to force Pakistani authorities to decisively act against the militant Haqqani Network and Afghan Taliban, which Kabul and Washington believe have Pakistan's backing.

Siegfried O. Wolf, the director of research at the Brussels-based South Asia Democratic Forum (SADF), believes the complex nature of Afghan-Pakistani ties would be a major obstacle in CPEC's potential expansion.

"CPEC's expansion to Afghanistan is only possible if Islamabad changes its Afghanistan policy," Wolf told DW.

"Until now, there is no indication for such change," he added.

The US reaction to China's increased involvement in Afghanistan and Pakistan would be another deciding factor for the project's future.

Some experts are of the view that Washington could welcome any effort that strengthens the Afghan economy.

"I can't imagine it [the United States] would formally oppose Afghanistan's role in CPEC, if it views Kabul's involvement as a way to strengthen an extremely fragile and struggling Afghan economy," said Kugelman.

But others, like Siegfried O. Wolf, are cautious about any optimism over CPEC.

"Let's not ignore that CPEC is part of China's flagship One Road One Belt project that allegedly aims at building a new world order," Wolf underlined.

Experts say China is seeking to increase its clout in Afghanistan and Pakistan and reduce US' influence in the region. CPEC, they say, has political implications also.

The Afghan Taliban are in a position of strength in Afghanistan, and China would not be able to implement CPEC in the country if the militant group opposed the project.

This could also mean that Beijing and Islamabad would have to a reach a deal with the Taliban in order to ensure the security of Chinese investments in Afghanistan. But a potential China-Taliban deal is unlikely to be welcomed by Kabul and Washington. Potential Taliban involvement in the project could provide the Islamist group with more sources of income and the recognition as a major stakeholder in Afghanistan's politics and economy.

"I don't think that the US and Afghanistan would agree to any substantial power-sharing deal with the Taliban as a condition for the extension of CPEC into Afghanistan," Wolf said.

The CPEC is part of China's ambitious One Belt, One Road initiative through which it aims to improve its connectivity to Central Asian countries and other parts of the world. Therefore, the Chinese government will have to convince other regional powers like India, Iran and Russia that Afghanistan's potential inclusion in the project won't undermine their interests.

India, for instance, would need assurance that CPEC would not result in strengthening Pakistan and the Taliban in Afghanistan. India and Iran would also need guarantees that the project would not undermine their investment in Chabahar Port, a trilateral project involving Iran, India and Afghanistan.

Russia, on the other hand, is wary of the presence of "Islamic State"-linked militants in Afghanistan and Central Asia. Moscow, therefore, would like to see the CPEC reining in the terrorist group.