What does China want to achieve in Afghanistan?

While visiting Afghanistan and Pakistan, China's Foreign Minister Wang Yi has urged the two countries to form a crisis prevention mechanism. Can Beijing persuade Islamabad to allay Kabul’s concern and rein in jihadists? 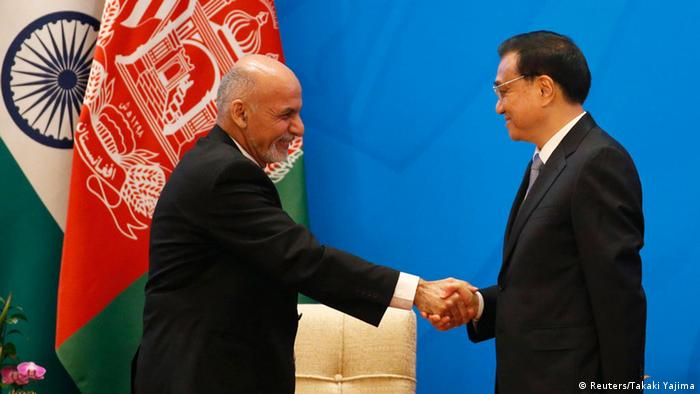 China's Foreign Minister Wang Yi held talks with Pakistani officials Sunday in Islamabad, a day after his meeting with Afghan President Ashraf Ghani in Kabul. The purpose of these meetings is purportedly to increase cooperation between the hostile neighbors in order to develop effective counterterrorism mechanisms.

Ties between Afghanistan and Pakistan have deteriorated in the past few months, with Kabul becoming increasingly wary of Islamabad's alleged support for Islamist militants. Both countries accuse each other of providing jihadists with safe zones to launch attacks across the border.

"As Afghanistan and Pakistan's mutual friend, China encourages them to establish a crisis prevention and management mechanism as soon as possible, to properly deal with any kind of sudden occurrence," he said.

China is already part of a Quadrilateral Coordination Group - comprising Afghanistan, China, Pakistan and the United States - that was established to end the protracted Afghan crisis. The grouping has not achieved any significant breakthrough so far, with Islamabad and Kabul at loggerheads over the militancy issue, and Beijing and Washington lacking trust.

Experts say that China has heavily invested in Pakistan and that is why it wants peace in at least those areas where its "One Belt One Road" project is being implemented. China has built a port in the southwestern Pakistani province of Baluchistan as part of its nearly 60-billion-dollar project to establish overland and sea trade routes to reach Middle Eastern, European and African markets.

While Chinese authorities enjoy tremendous influence on Pakistan's civilian and military establishments, Afghanistan is still closer to the United States. Thus, bringing Kabul and Islamabad onto the same page over an Afghan solution won't be easy for Beijing.

"The Chinese diplomacy is very active all around the world, and it is only natural that Beijing pays special attention to countries at its borders, and particularly when a country like Afghanistan is so destabilized," Paulo Casaca, founder and executive director of the Brussels-based South Asia Democratic Forum (SADF), told DW.

The expert says that in an attempt to stabilize Afghanistan, it is natural that China is also getting closer to the Taliban.

But most importantly, Casaca believes the Chinese efforts in Afghanistan are aimed at restricting US influence in the region.

Earlier this month, Pentagon chief Jim Mattis said the US soughta "regional solution" to the Afghan war. Can the Trump administration achieve this objective when both Russia and China are now increasingly involved in Afghan diplomacy?

"Russia's realignment in Afghanistan, forging a strategic partnership with Pakistan and China and engaging with the Taliban, seems to be geared by a single objective: to confront the US wherever it is possible," said Casaca.

"The US needs to realize it is facing a hostile tripartite alliance of Pakistan, Russia and China in Afghanistan. It must answer the challenge by promoting its own alliance with India and the European Union."

Another reason for Beijng's diplomatic efforts in Afghanistan is its concerns about Islamists operating in China's Xinjiang region and their alliance with the Taliban and other Islamist groups in Afghanistan and Pakistan.

But Siegfried O. Wolf, a researcher at the University of Heidelberg's South Asia Institute, is of the view that Beijing is only trying to contain the crisis and not to resolve it.

"China is indirectly encouraging Pakistan to continue its state patronage of cross-border terrorism. At the same time, Beijing is supporting Pakistan's policy of fighting anti-state militants, especially those groups that could pose a threat to CPEC (the China–Pakistan Economic Corridor)," Wolf told DW.

Read: Why is China 'protecting' the Pakistan-based Jaish-e-Mohammad militant group?

Afghanistan observers also say that Beijing is seeking Pakistan's assistance not only to help create peace in Afghanistan, but also to keep regional rival India at bay. Since their independence from British rule, both India and Pakistan have sought to increase their clout in Afghanistan.

"China's counterterrorism measures exclude the US and India. Chinese authorities have historically treated New Delhi as a geopolitical rival. India's close ties with the US are also perceived as a threat in Beijing, therefore China prefers not to cooperate with India. It appears that Beijing is trying to construct a new security bloc in Asia. This, however, does not involve the Sino-Indian security cooperation," underlined Wolf.