Populist politician Imran Khan is on course to become Pakistan's next premier, with his party set to win the most seats in general elections. The results have split the country like never before, says DW's Shamil Shams. 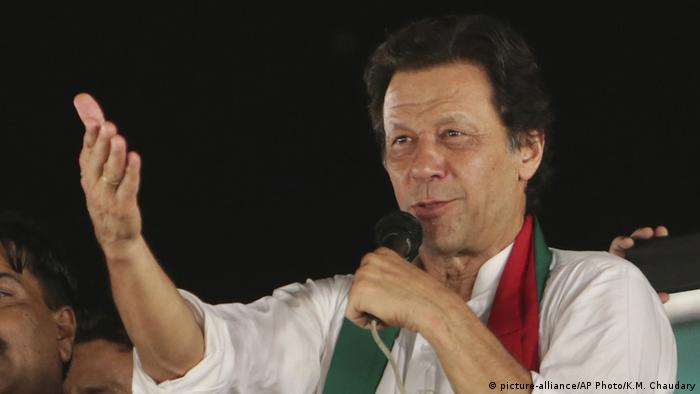 Cricketer-turned-politician Imran Khan's victory in the July 25 general vote was all but certain because his main rival, former Prime Minister Nawaz Sharif, had fallen out with the country's powerful military.

Sharif, who is currently incarcerated on corruption charges, along with his daughter Maryam Nawaz, had increasingly adopted a defiant tone toward the army generals. He sought to bring foreign and domestic policies under his civilian rule and improve ties with India and other neighboring countries. He also confronted the military on the issue of militant Islamists amid Western allegations that Pakistani authorities use them to destabilize the Afghan government.

In Sharif's absence from the political scene, Khan's path to premiership was almost confirmed.

But Sharif's return from the UK to face imprisonment on July 13 had raised some hopes that his center-right Pakistan Muslim League (PML-N) party could stage a comeback and defeat Khan's populist Tehreek-e-Insaf (PTI, Movement for Justice) party in Wednesday's polls. Many people in Pakistan were expecting a "divided parliament" in which no political group would get a clear mandate. But the results, albeit unofficial, have made it clear that Khan's yearslong dream to lead the country has finally come true.

The consequences of this controversial victory could be dangerous for Pakistan — controversial because Sharif's party did not get a level playing field in the run-up to the election and local media complained of intimidation and heavy censorship. Parties on the losing side, including the Pakistan People's Party (PPP) led by late premier Benazir Bhutto's son, Bilawal, have already said they would protest against massive irregularities in the voting process. The PML-N, which still managed to emerge as the second-largest party, could also take to the streets.

Sharif still has huge clout in Punjab province, which is the country's most populous and electorally most significant province. It is Punjab from where both Sharif and the military generals extract their power. Resentment against the military in Punjab would not be a good sign for the South Asian country, which is facing immense security challenges. An "Islamic State"-claimed blast in Quetta killed more than 30 people on election day, and earlier this month IS launched one of the deadliest terror attacks in the country's history — in Mastung, Baluchistan.

These are among the many dangers the nuclear-armed South Asian nation is facing. Yet, a deep political divide, the increasing conflict between the military and Sharif, and a surge in support for Islamist parties could worsen the situation. What Pakistan needs at the moment is an across-the-board reconciliation to deal with not only the security challenges but also existential crises, including acute water and energy shortages, unemployment and inflation. A large number of people in Pakistan are losing hope in parliamentary democracy and turning to banned Islamist groups.

But Khan has repeatedly said he will not initiate the process of political reconciliation. He is likely to take an aggressive stance towards his political opponents and that could polarize the country even more.

At a time when Pakistan needs to improve its ties with the international community, particularly with the US, Khan is expected to ratchet up his populist anti-West rhetoric. The PTI leader has repeatedly blamed Washington for the "mess" in Afghanistan and has "justified" the Taliban's actions.

The Financial Action Task Force (FATF), a global terror watchdog, has put Pakistan on its "gray list" on terror sponsoring allegations. In September, the FATF could blacklist the country, which would be devastating for Pakistan's dwindling economy.

Pakistan, thus, needs reconciliation and a moderate path not only domestically but also internationally. But as prime minister, Imran Khan is likely to go the other way on both fronts.

Time to put things in order

The dream of Sharif's supporters that Pakistan will have civilian supremacy, while the military will perform its constitutional and subservient role, has been dashed for now. But it is only a temporary defeat.

A section of the country's civilian capitalist class, which sees more economic opportunities in having better ties with India, other regional countries and the West, will continue to clash with the military, which also has a huge stake in Pakistan's economy. For the first time in Pakistan's history, since the country's independence from British rule in 1947, a popular politician from Punjab province is confronting the generals. A vibrant civil society and media are also demanding more independence, a bigger space in society.

Also, Pakistan can't progress in international isolation. The global community will continue to demand more openness from Pakistani rulers, more cooperation, more freedom of speech and greater democracy. Khan, at the helm, will have to work on these issues, tone down his rhetoric, initiate political reconciliation, improve ties not only with China but the US also, and assert his own constitutional supremacy over domestic institutions. Pakistan can't afford his populist adventurism.

Read more: The army, a 'rebel,' a 'messiah' — who would prevail in crucial Pakistan vote?

'A new dawn for the country'

Opinion: Shall I be mother? When doctors make the worst patients 16h ago