Pakistan has entered a new phase of political instability with the recent ejection of Nawaz Sharif as prime minister. DW spoke to prominent opposition leader Imran Khan about the path the nation's politics are taking. 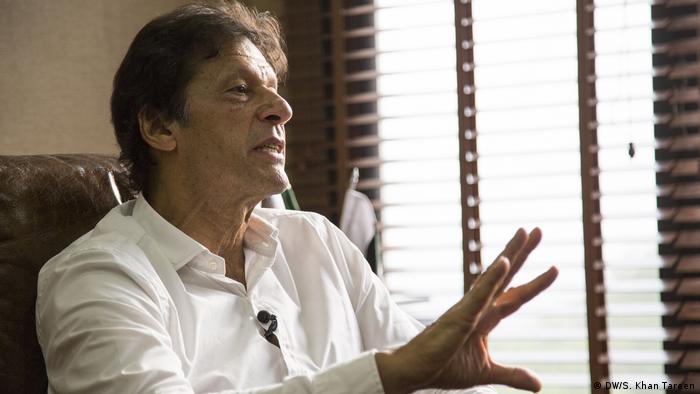 Although he was loved by millions in the South Asian country as one of the greatest cricketers the nation has ever produced, and more significantly, under whose leadership Pakistan won its first Cricket World Cup in 1992, Khan wasn't considered a serious politician even by his ardent fans. But he is now one of the key players in the Pakistani political arena.

Khan's PTI came in third in the May 2013 parliamentary elections and now rules the northwestern Khyber Pakhtunkhwa province bordering Afghanistan. He wants Islamabad to make peace with the Tehreek-e-Taliban Pakistan (TTP) and sever its alliance with the US in the campaign against terrorism undertaken by Washington.

The manifesto of Khan's party resonates well with a large section of the Pakistani middle class due to its emphasis on governance issues - particularly corruption and political accountability.

In a DW interview, Imran Khan talks about the recent ouster of Nawaz Sharif as prime minister, the Pakistani military's role in the nation's politics, jihadi movements and relations with the outside world. 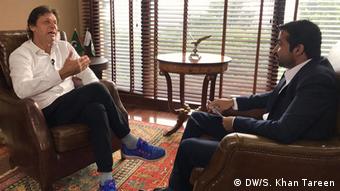 Khan: 'Instead of democracy, we have so far had a kleptocracy in Pakistan'

Imran Khan: It is completely unjustified, because Pakistan is moving toward democracy. The pillars of democracy are transparency, accountability of leadership, free and fair elections, independent media and an independent judiciary. I can see these pillars getting strengthened in Pakistan. Instead of democracy, we have so far had a kleptocracy in Pakistan. But things are getting better.

For the first time in the history of Pakistan, a sitting prime minister has been ousted for money laundering, corruption and forgery.

Some people have been making their way into the corridors of power merely to make money. Whenever the army has taken control of the country, people have celebrated it. But now the army is not coming. In my opinion, democracy will be strengthened after the Supreme Court's judgement against Nawaz Sharif. Whoever comes to power now thinks twice before indulging in corruption.

Pakistan's liberal sections, and many political commentators in the West, have dubbed PM Sharif's dismissal a "judicial coup." They also say that you and your Pakistan Tehreek-e-Insaf Party were used by the country's powerful military to oust Sharif. What do you have to say about these claims?

This is a joke. I don't know who calls himself liberal and comes up with stupid statements like this. Firstly, the army chief was selected by Sharif, and Sharif also celebrated the appointment of the chief justice of Pakistan just last December. Why would they get together to have a judicial coup against the prime minister.

Sharif was caught in a scandal which is called Panama Papers or Panama leaks.

The prime minister of the UK also had to explain it to their country's Parliament when his name appeared in the Panama leaks. We, Pakistan's opposition parties, similarly asked Sharif to give an explanation about his source of income when it involves offshore companies that owned luxury properties in London. And how did he take the money out?

He has not been able to answer the questions that were asked by the two benches of the Supreme Court. Sharif also could not prove his source of income in front of the Joint Investigation Committee (JIT), formed by the apex court to investigate the issue.

He failed and he lied to the court about his source of income. He produced fake documents; so how can anyone call it a judicial coup?

In fact, it's the first time we have ever heard the chief of army staff twice publically declaring that they are standing with Pakistani democracy and the constitution. What these analysts are saying is propaganda by Nawaz Sharif after being caught in corruption cases.

Your anti-corruption drive has only focused on politicians. Why haven't you launched a movement against the corruption of Pakistan's army generals, or the corporate corruption in the country?

Well, I spoke against corruption even when General Pervez Musharraf was in power. I was the only politician who was put in jail during Musharraf's time. It is not true that I have not spoken against them. But at the moment, we have a democratic government and the chief executive, in this case the prime minister, is the authority to hold them (army generals) accountable. 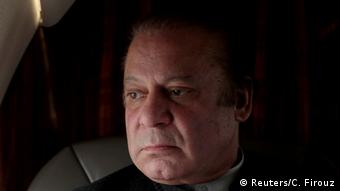 Nawaz Sharif had to step down from office recently, following a Supreme Court ruling in a corruption case

Former president and military dictator Pervez Musharraf said in a recent interview that politicians did more harm to Pakistan than military generals. There are court cases pending against Musharraf. But we don't hear much about his cases from you or your party officials. Why so?

When General Musharraf was in power I spoke out against him. When the power came into Asif Ali Zardari's hands I asked him to hold Musharraf answerable, because no one is above the law, but he was not interested. The question you should have been asking me was why Sharif did not take action against Musharraf.

Sharif used to talk about holding Musharraf accountable when he was out of power. But when he became prime minister he did nothing. We could hear Sharif saying he would hold Musharraf and Zardari accountable, but all were just statements.

If elected as prime minister of Pakistan, what kind of ties do you want to have with the West - the US and the EU?

I think Pakistan should always have good relationships, firstly, with its neighbors - Iran, Afghanistan, India and China - and then rapprochement with the West also. We want good relations with China because Pakistan's prosperity depends on China. Beijing is pumping billions of dollars into our country through its China-Pakistan Economic Corridor (CPEC) project.

Definitely, the EU and the US are also among Pakistan's major trading partners, and I would support friendly relations with them. 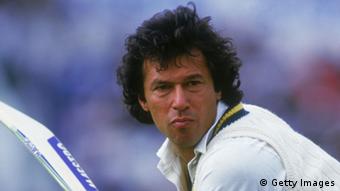 You want negotiations with the Taliban in Afghanistan and Pakistan, and many people criticize you for advocating talks. You also refuse to condemn jihadi groups over terror attacks and blame it on the US intervention in Afghanistan. Do you really think that the Pakistani military establishment is not backing some Islamist groups in Afghanistan and Kashmir, and that the issue of Islamism in Pakistan is much older than the US involvement in Afghanistan?

These are merely allegations by those people who don't understand jihadi movements and the Taliban or what is happening in Afghanistan and Pakistan.

The military solution has failed. The US also wants to negotiate with the Taliban, as Washington could not get fruitful results in Afghanistan through military means. The US has spent trillions of dollars without getting success in this war.

And you know that these jihadi organizations were created by Pakistan's Inter-Services Intelligence and the US Central Intelligence Agency to fight the Soviet invasion.

When the Soviet Union disintegrated and the US went away, then Pakistan was left with those jihadi groups. After the 9/11 attacks in the US, Washington began going after the jihadi outfits by labeling them as terrorists - the same people it once celebrated as heroes.

Pakistan also became a front-line state in this war on terror. Pakistan has suffered a lot; we have lost 70,000 people in this war, in which we had nothing to do. In my opinion, we should stay out of the war.

Last but not least, what kind of ties you want with India? Experts say that any attempt by a Pakistani premier to have good relations with India draws the ire of the military. Do you think that if you become PM, you would be able to take Pakistan's foreign and defense policies strictly under the civilian control?

This is purely propaganda. It might have been true in the past, but now there is consensus among Pakistani political parties and people that there should be peace with India. Everyone knows that India is being ruled by a Hindu communalist, Narendra Modi. His only agenda is to isolate Pakistan. We can't make peace in this way. When any incident happens in India, Modi directly blames Pakistan for the mess. He never thinks of riding the peace process, rather he has been derailing it.

He also blames Pakistan for fomenting terrorism in Kashmir, but it's not true because it is the Modi regime which has been using brute force on an indigenous movement. Former Indian PM Atal Bihari Vajpayee was also from the same right-wing political outfit, the Bharatiya Janata Party (BJP), but during his premiership he always supported the idea of peace.

Imran Khan is a prominent opposition politician in Pakistan. He is leader of the Pakistan Tehreek-e-Insaf party. Before entering politics, Khan was well-known inside and outside his home country as a star cricket player.

The interview was conducted by Shah Meer Baloch and Shamil Shams.