Pakistanis vote in extremely divisive election | Asia| An in-depth look at news from across the continent | DW | 25.07.2018

Polls have opened in Pakistan amid heavy security, with media being barred from entering some voting centers. Analysts say the vote could further polarize the country. Shamil Shams reports from Islamabad. 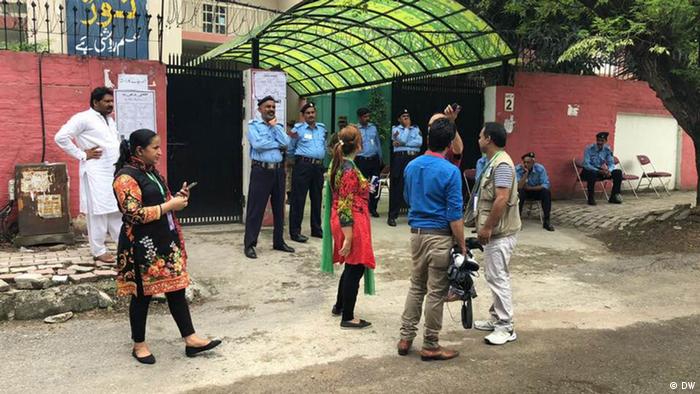 Will cricketer-turned politician Imran Khan be the next prime minister of Pakistan? Will former Prime Minister Nawaz Sharif's efforts to "rein in" the military generals and his "courageous" return to Pakistan from the UK to face prison help his Pakistan Muslim League (PML-N) party in Wednesday's vote? Is the country's powerful military really meddling in elections?

Here, in the capital Islamabad, most people are debating these questions. Pakistan's worsening economy, the country's acute water and energy crises, foreign and security policies, ties with India and Afghanistan hardly came under discussion in the run up to Wednesday's parliamentary elections.

As Pakistanis head to the polls Wednesday, analysts and everyday people are unanimously of the opinion that these general elections could make or break Pakistan.

A sense of insecurity

The polling began amid tight security on Wednesday, with at least 400,000 military personnel guarding the voting centers across the country. According to the Election Commission of Pakistan, 105.96 million people are eligible to cast their vote in these elections.

A suspected suicide blast near a polling station in the western city of Quetta killed at least 25 people and injured 20 just three hours after the opening of polls.

Journalists and reporters were only given limited access to polling stations in Islamabad. Security officials did not allow any media coverage of the voting process from inside of the voting centers.

"These measures raise suspicions. Why are they not letting us report from inside? The security situation was worse in 2013, yet the media had more access to voters and polling stations back then," Chiara Reid, a journalist covering the election, told DW. 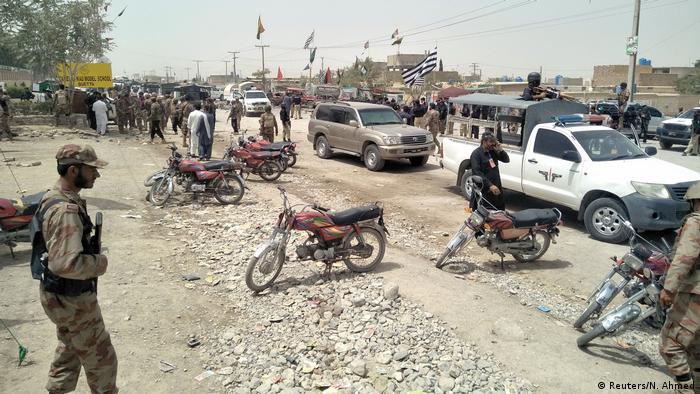 The election results, which won't be officially announced until Thursday morning, are hard to predict.

If Sharif's party, which is now run by his younger brother and former chief minister of the country's most populous and electorally most significant province, Punjab, Shahbaz Sharif, secures a majority, Pakistan could face a bigger civilian-military clash in the coming months.

If Khan's Pakistan Tehreek-e-Insaf (PTI, Movement for Justice) party manages to win most seats in the National Assembly (lower house of parliament) and provincial assemblies, Sharif's supporters would likely protest against the military and allegedly military-backed Khan even more vehemently. Khan's possible conservative and populist premiership could see an even greater surge in anti-West sentiment. Ties with the United States, which has been forcing Pakistan to take decisive action against militant Islamists along the Afghanistan-Pakistan border, could deteriorate, with a possibility of more economic sanctions.

Thus, the Wednesday vote has been dubbed "Pakistan's most crucial election" in at least two decades.

'A new dawn for the country'

Khan's supporters were visibly upbeat during the voting process, as they sense an imminent PTI victory in the election.

"The PTI will secure at least 125 seats in the National Assembly. You can see that Khan's supporters are coming out to cast their ballot in large numbers," Alamzeb Khan, who voted for the PTI, told DW.

The real electoral battle, however, will be fought in the South Asian country's rural areas, where the Pakistan People's Party (PPP), headed by Bilawal Bhutto Zardari, and Sharif's PML-N are still in the race.

But the perception that Khan will win the elections as he has the "support" form the military, could result into a lower turnout of PML-N voters.

"Opinion polls put Khan's PTI ahead in the elections. It will gain most seats in parliament, but it is possible that Khan will need the support of independent members to form the government," Jan Achakzai, a political analyst who quit the PML-N party earlier this year, told DW.

Achakzai is not the only ex-PML-N official who has left the party; many former Sharif aides have deserted him since the three-time prime minister confronted the military over the issue of civilian supremacy.

"The PML-N is not in a position to win the election. They will even lose in their stronghold, Punjab. Those candidates who can win elections on their own (called "electables" in Pakistan), have sensed PML-N's defeat and are now supporting Khan," added Achakzai.

"The overall voters' turnout will be impressive on Wednesday," he said.

Read more: The army, a 'rebel,' a 'messiah' — who would prevail in crucial Pakistan vote?

But many analysts say that Sharif, who is currently in jail on corruption charges, is likely to remain a significant force in Pakistani politics even if his party fails to win the election.

"Under the leadership of Sharif and his brother Shabaz, Punjab has progressed immensely. The province is more prosperous now and its development projects have been massive. The PML-N government has opened many new hospitals, constructed new roads and completed mass transit projects in the past few years," Khan said, adding that Sharif's supporters don't care about corruption allegations against their leader and have remained loyal to him.

But Sattar Khan said the election is definitely the "most divisive" in Pakistan's recent history.

At the same time, Imran Khan's potential victory could initiate a new conflict, and its potential government would likely face difficulties in running the administration. Khan says he will not reconcile with either Sharif or former president and Benazir Bhutto's widower Asif Ali Zardari, as, according to him, both are corrupt and have misruled the country.

Some people in Islamabad are of the view that Pakistan needs political reconciliation more than ever; a new "social contract" among politicians, judiciary and the army to take the country out of a number of existential crises.

"The economic situation of the country is dire. Nawaz Sharif and his party have ruined the economy during their tenure. So Pakistan needs to weed out corruption. We don't need reconciliation with those who have harmed Pakistan," Shoaib told DW.

'Military is not responsible for political chaos'

Shoaib is vexed with Western media over its "acceptance" of the "military's election interference" narrative.

"Sharif was convicted in corruption cases and was sentenced to jail by courts. He is blaming the military only to conceal his crimes," the retired army official said.

"The military is not meddling in the election. Western media needs to understand the nature of the cases against Sharif. Corruption and corrupt politicians face the music in every country. Why accuse the military of your corruption," Shoaib said.

Security has been beefed up in Islamabad and other parts of the country ahead of the polls. Violent attacks in the run up to the elections have killed a number of candidates and the authorities fear more assaults during the polling. An "Islamic State"-claimed terror attack in Mastung, Baluchistan, earlier this month, turned out to be one of the biggest militant assaults in Pakistan's history.

Military supporters say the "political bickering" around these elections could compromise Pakistan's security.

Former Pakistani PM Sharif has been arrested after landing in Pakistan. The arrest comes as the deadliest attack in the election campaign killed 130 people, including a candidate, in southwestern Baluchistan province. (13.07.2018)

Is Pakistan’s media being silenced?