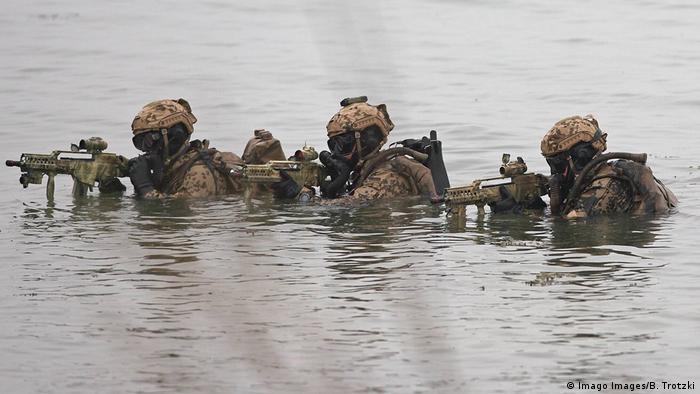 The German Bundestag, or lower house of parliament, voted overwhelmingly to extend three army missions in Africa for another year on Thursday. The army, known as the Bundeswehr, is currently engaged in one UN and one EU mission in Mali and another EU mission in Somalia.

The mandate for all three missions will run until late May of 2020.

Yet the deployment of German special forces units in Niger and Cameroon drew harsh criticism from parliamentarians who accused the government of illegally bypassing lawmakers.

The Bundeswehr's UN peacekeeping mission MINUSMA in Mali, which began in 2013, is designed to bolster Mali's government and deny quarter to terrorists.

As terrorist groups are heavily involved in organized crime and human trafficking, the mission is considered a priority for its impact beyond Mali's borders.

Some 50 nations currently deploy about 13,000 soldiers and 1,700 police in the West African county. Around 840 German soldiers actively participate in the mission at the moment, though the mandate allows for up to 1,100.

Mali has been roundly criticized for not doing enough to bring about a political solution to the local conflicts. More than 150 UN troops have been killed since the mission began.

The German government has called the security situation in Mali "fragile," and calculates mission extension costs for MINUSMA at €314 million ($352 million).

The Bundeswehr also participates in the EUTM mission sponsored by the European Union, which is designed as a training mission for Mali's armed forces.

The EUTM mandate does not call for European troops to directly engage in missions carried out by the Malian army.

The Bundeswehr is tasked with advising Mali's Defense Ministry and army leadership, as well as protecting MINUSMA staff.

Some 620 soldiers from 22 EU member states participate in the mission, which also began in 2013. The Bundeswehr mandate allows for up to 350 troops, though that number is currently lower, with 190 German soldiers deployed. Berlin says that a year-long extension of the EUTM mission will cost €41 million.

The Bundeswehr is also involved in the EU's Operation Atalanta mission designed to combat piracy off the coast of Somalia. The mission, which was launched in 2008, is tasked with securing shipping routes for international convoys transporting aid to suffering Somali citizens.

Piracy in the strategically important Horn of Africa has been greatly hampered due to the presence of EU naval forces according to the German government's extension request to the Bundestag.

Currently, 80 German soldiers participate in the Atalanta mission. The mandate for the coming year, which the government estimates will cost around €40 million, will drop to a maximum of 400 soldiers, down from 600.

Contentious deployments in Niger and Cameroon

The deployment of special forces units in Niger and Cameroon, however, drew sharp parliamentary criticism. At issue are two units deployed to train local forces.

Although the Bundeswehr and Chancellor Angela Merkel's government argue that is not the case for training forces, those opposed to the deployment called it "obviously illegal."

Green Party defense expert Tobias Lindner, who is also in the opposition, said, "The government must put its Niger mission on solid legal footing, both in the interest of transparency and for the protection of deployed soldiers."

'Not actively participating in operations'

Concerns over safety were also voiced by Peter Bartels, parliamentary commissioner for the armed forces and a member of the Social Democratic Party (SPD), which governs with Merkel's Christian Democratic and Christian Social Union (CDU/CSU) parties.

Speaking of the deployments, Bartels said he was worried that German troops could be dragged into armed conflicts. Bartels acknowledged that other forces deployed to Niger had a mandate, but the special forces units did not.

Chancellor Merkel's spokesman, Steffen Seibert, brushed off concerns about the legality of the special forces deployments, saying soldiers were only tasked with training local forces and "not actively participating in operations."

Seibert's sentiments were echoed by the Defense Ministry. The speaker did, however, say that the government would provide parliamentarians with written information about the scope of the Niger and Cameroon missions.