Germany's armed forces will continue a program to train Saudi military officers. This comes despite a rift developing after the killing in Turkey of journalist Jamal Khashoggi and a call to end German arms exports. 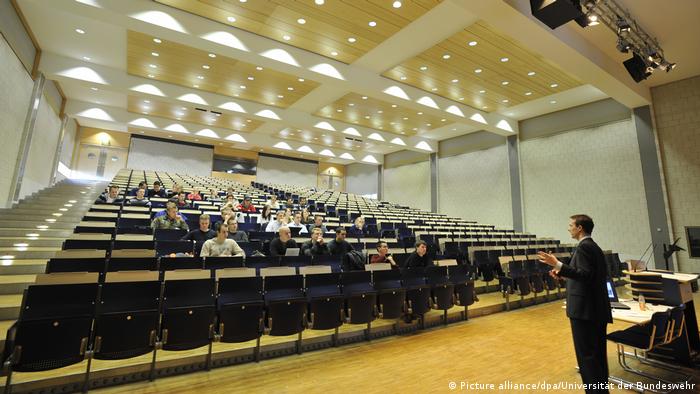 Germany's Bundeswehr is still training Saudi troops despite the diplomatic fallout from the death of journalist Jamal Khashoggi in Turkey, authorities confirmed on Sunday.

Seven Saudi officer candidates are being trained at the Bundeswehr Leadership Academy in Hamburg, weekend newspaper Welt am Sonntag reported.

The soldiers are reportedly studying German as a prerequisite for beginning lengthy officer training in Germany in 2019.

The training will be continued as planned "subject to other political decisions," a spokesman for the ministry told the outlet. German news agency DPA separately confirmed the reports.

The Saudi trainees are here under a program agreed in 2016, in which Saudi Arabia bears the costs of training a handful of troops in Germany each year at military universities.

Relations between Saudi Arabia and Germany took a dive after Khashoggi went missing after entering the Saudi Embassy in Istanbul last month. It later emerged that he had been murdered, allegedly at the hands of state actors.

Germany halted its controversial weapons exports program to Saudi Arabia until the matter is cleared up. It has long faced criticism for its relations with Riyadh, which has been leading a ruthless military campaign in Yemen.

A year ago the German armed forces set up a command center for internet security. The new German hacker-soldier elite is being trained at the Bundeswehr University, on the outskirts of Munich. (01.04.2018)

The Bundeswehr's university has come under scrutiny as claims of far-right extremism in the German military continue to mount. Defense Minister von der Leyen, meanwhile, also finds herself under increasing pressure. (19.05.2017)