Austria and the European Parliament have called for a bloc-wide halt on arms exports to Saudi Arabia following Jamal Khashoggi's death. Germany also backed the move, but other key exporters were silent or unconvinced. 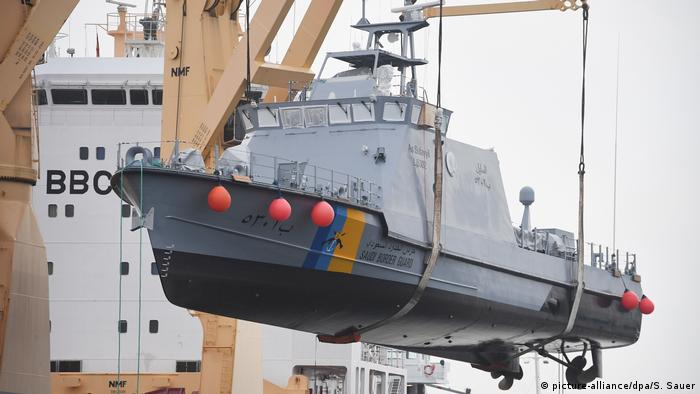 As outrage over the killing of Jamal Khashoggi continues to grow, more countries within the European Union are reconsidering their weapons exports to Saudi Arabia, with Austria calling for an EU-wide ban on Friday.

Austrian Foreign Minister Karin Kneissl, whose country currently holds the EU's rotating presidency, said that Khashoggi's killing was the last straw in a line of abuses, including the Qatar crisis and the "terrible war in Yemen."

"If we as the entire EU stop weapons exports to Saudi Arabia, that will help end these conflicts," Kneissl told German newspaper Die Welt. She noted that Austria stopped delivering arms to Saudi Arabia in 2015.

French President Emmanuel Macron bucked the trend when he said on Friday that stopping arms sales because of the murder would be "pure demagoguery."

"What's the link between arms sales and Mr Khashoggi's murder?" Macron asked, during a news conference in Slovakia. "I understand the connection with what's happening in Yemen, but there is no link with Mr Khashoggi."

Khashoggi, a columnist for the Washington Post and a critic of the Saudi regime and Crown Prince Mohammed bin Salman, is believed to have been killed inside Saudi Arabia's consulate in Istanbul where he was last seen on October 2.

On Thursday, the European Parliament overwhelmingly passed a resolution calling on the bloc's 28 member states to halt weapons exports. EU lawmakers also called for an independent investigation into Khashoggi's killing, placing the blame with Crown Prince Mohammed, heir apparent to the Saudi kingdom.

"The murder is unlikely to have happened without the knowledge or control of Saudi Crown Prince Mohammed bin Salman," lawmakers said in the resolution.

Alexander Stubb, former Finnish prime minister and a possible successor to European Commission President Jean-Claude Juncker, told DW that the EU must take action if the murder was organized by the kingdom.

"It's very important to be principled when it comes to foreign policy. You have to look at the whole situation in the Middle East, draw conclusions from that and then see what kind of relationship you have with Saudi Arabia," Stubb told DW, adding that the situation was "not that black and white."

Germany, which recently suspended all arms exports to Saudi Arabia until the Khashoggi case was concluded, offered support for EU-wide action.

German Economy Minister Peter Altmaier said on Friday that a unified position on arms exports would send a stronger message to the kingdom.

"Therefore it is good if we in the European Union talk about a common position and I support the proposal from Austria," Altmaier told Deutschlandfunk radio.

German Chancellor Angela Merkel spoke with Saudi King Salman on Thursday to condemn the killing "in the sharpest possible manner."

The German government has frequently been criticized for its weapons exports to Saudi Arabia, with Berlin greenlighting arms exports worth €254 million ($291 million) this year alone.

Although support is growing from within the EU for a unified position against Saudi Arabia — other major weapons exporters are hesitant about an outright ban.

France, the United Kingdom and Spain are all key arms exporters to Saudi Arabia.

Although French President Emmanuel Macron threatened to take action against those responsible for the murders, he has largely ignored protests at home over France's arms deals. Last year, Paris' arms deals with Riyadh totaled around €1.5 billion ($1.7 billion).

The British government is likewise under fire for its arms exports to the kingdom, which are worth around $1.4 billion (€1.23 billion) annually. As the UK is due to leave the EU next year, it is considered unlikely that London will jeopardize its business with the kingdom.