Angela Merkel puts on hold arms sales to Saudi Arabia | Germany | News and in-depth reporting from Berlin and beyond | DW | 22.10.2018

Chancellor Angela Merkel has said Germany will stop exporting weapons to Saudi Arabia, at least for the time being. The decision comes in the wake of the killing of journalist Jamal Khashoggi at a Saudi consulate. 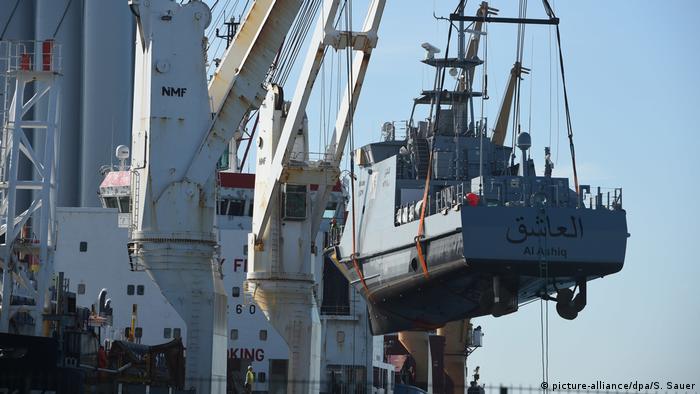 Chancellor Angela Merkel said on Sunday that Germany would put arms exports to the kingdom on hold for the time being, given the unexplained circumstances of dissident journalist Jamal Khashoggi's death.

The chancellor said Riyadh had not put the full facts of Khashoggi's demise "on the table."

"First, we condemn this act in the strongest terms," she told a press conference after speaking to members of her Christian Democratic Union (CDU) party.

"Second, there is an urgent need to clarify what happened — we are far from this having been cleared up and those responsible held to account,"  she said. "Thirdly, I agree with all those who say that the, albeit already limited, arms exports cannot take place in the current circumstances."

Later, at a campaign event ahead of next Sunday's elections in the state of Hesse, Merkel called Khashoggi's death an "atrocity" that "had to be clarified," while reiterating that German arms exports to Saudi Arabia would be suspended until the matter was adequately explained.

German Foreign Minister Heiko Maas, of the Social Democrats — junior partner in Merkel's coalition government — had already called for weapons exports to the kingdom to be halted. Germany is the fourth largest exporter of weapons to Saudi Arabia after the United States, Britain and France.

But this is not the first time the German government has made such a pledge. A clause exists in the coalition agreement, signed by Germany's governing parties earlier this year, which says that no weapons exports may be approved to any country "directly" involved in the war in Yemen. Saudi Arabia has launched countless airstrikes against Iranian-backed Houthi rebels in Yemen for several years.

But the German coalition agreement makes no mention of honoring deals that have previously been struck. For that reason, the government has made an exception for a 2015 deal for 30 military patrol boats built in the northeastern region of Mecklenburg Western-Pomerania. The Saudi Navy has been maintaining a blockade of ports in Yemen, a country currently experiencing the worst famine for 100 years, according to the United Nations.

The Riyadh government also receives weapons, or weapons parts, from multinational European companies, including Eurofighter, and MBDA, a company that makes missiles.

The coalition deal does say that German companies are entitled to protection of trust if they can prove that the weapons delivered will remain in the country that they are sold to. Such "end-use" guarantees, however, are almost impossible to enforce, as is shown by the case of G36 assault rifle, built by the southern German firm Heckler & Koch. Saudi Arabia bought a license to manufacture its own G36 rifles in 2008, and they have since also been used in the Yemen war.

In addition, German defense giant Rheinmetall founded an ammunition factory in Saudi Arabia in 2016 in a joint venture with the South African company Denel.

The chorus demanding Germany halt weapons exports to Saudi Arabia was joined on Monday by Tarek Al-Wazir, the Green party's leading candidate in this Sunday's Hesse state election, whose Yemeni father still lives in Sanaa. "This should finally be the time to change Germany's policy," he said.

Germany's opposition Green party has also called for the government to stop giving contracts to consultancy firm McKinsey, following a report in The New York Times that the US company had gathered information for the Saudi government about its critics.

"From my point of view it is untenable for Germany to work together with this consultancy firm until these accusations have been exhaustively investigated," the Green party's former leader Cem Özdemir told Der Spiegel. A number of German government ministries are McKinsey clients.

According to the New York Times, the Saudi government arrested one critic and imprisoned two brothers of another critic, who was living in Canada, after a McKinsey report identified them as driving a social media conversation criticizing austerity measures in the country in 2015. In a statement to the paper, McKinsey responded that it had "seen no evidence to suggest that [its report] was misused," though the company was "horrified" by the possibility.

Merkel said Germany would discuss further "reactions" to the case with its international partners, though some German companies have already made gestures: on Monday, Siemens CEO Joe Kaeser cancelled an appearance at an investors' conference in Riyadh that was to begin on Tuesday.

On Saturday, the chancellor said the Saudi explanation for Khashoggi's death was insufficient— and that those responsible for the killing "must be held accountable."

Merkel's comments came after Saudi Arabia's foreign minister described the killing of Khashoggi as part of a "rogue operation," adding that the circumstances of his death — and the whereabouts of the body — were unknown.

The Saudis have said Khashoggi, a columnist for The Washington Post, was killed in a "fistfight" at its consulate in Istanbul, having previously insisted that he had left the building. Khashoggi had been at the diplomatic office to seek paperwork to marry his Turkish fiancee.

Turkish officials say he was murdered — and his body dismembered — and that they have audio and video evidence.

Trump not keen on arms embargo

Last month, Germany approved €416 million ($480 million) worth of military exports to Saudi Arabia for 2018. In the past, such exports have mostly consisted of patrol boats.

Amid calls across the world for arms embargoes against Saudi Arabia, US President Donald Trump has said his country would be "punishing itself" if it halted weapons sales to the country.

"There are other things we can do that are very, very powerful, very strong and we'll do them," Trump said on Saturday, without elaborating.

The US president has repeatedly said he does not want to stop a proposed $110 billion arms sale to the Saudis because too many US jobs depend on it.