US calls on Turkey to release Jamal Khashoggi murder proof

US President Trump has said he asked Ankara to release evidence it claims proves the reporter was slain by Saudi agents. The US has also denied helping Riyadh cover up the suspected murder. 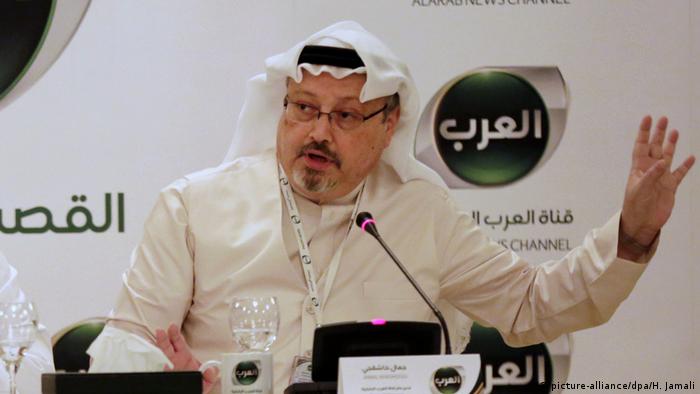 The United States denied on Wednesday that it was helping ally Saudi Arabia cover up the suspected murder of journalist Jamal Khashoggi, and asked Turkey to provide the audio and video evidence it has claimed to have showing that the veteran reporter was killed in the Saudi consulate in Istanbul.

"We have asked for it, if it exists," US President Donald Trump said.

Khashoggi, a onetime ally of the Saudi royal family turned critic, disappeared on October 2 after he entered the Saudi consulate in Istanbul to procure documents he needed to marry his Turkish fiancée. He has not been seen since.

Trump denied trying to assist Riyadh in denying their involvement in Khashoggi's death, saying "I just want to find out what's happening."

He said he was waiting for a report from Secretary of State Mike Pompeo, who is meeting this week with both Turkish and Saudi leaders.

The Turkish government has said it possesses audio and video proof Khashoggi was murdered shortly after entering the consulate. Pro-government Turkish daily Yeni Safak reported it had audio recordings of the reporter being tortured, first having his fingers cut off and then being decapitated.

An official close to the investigation told DW's Julia Hahn that there was proof the journalist "was killed" and that findings "match the evidence at the Saudi consulate" which was searched by investigators earlier this week. However, Turkish media reported that it appeared as though the consulate had been swept by Saudi agents before the search.

US media and officials have called on Ankara to release the evidence, but the Turkish investigators have not done so yet. Those suspicious of Riyadh's involvement have pointed to the strange travel plans of several Saudi nationals, who arrived on a private jet in Istanbul in the middle of the night on October 2 and left later that same day. One of the suspects identified by Turkey is a close associate of Crown Prince Mohammed bin Salman.

Since becoming the heir apparent, Salman has tried to position himself as a reformer, allowing women to drive in the extremely patriarchal kingdom and bringing back cinemas. However, he has also overseen a crushing bombing campaign in Yemen and escalated a diplomatic crisis in Qatar.

Trump has tried to defend Riyadh, whose trade relationship with Washington is key for both countries. However, the president has appeared to be increasingly ill at ease as it looks more likely that Khashoggi was murdered by Saudi officials upset with his anti-Riyadh stance as a writer for the Washington Post.

On Wednesday, the Washington Post published Khashoggi's last column, in which be bemoaned the terrible state of press freedom in the Arab world. "A state-run narrative dominates the public psyche, and while many do not believe it, a large majority of the population falls victim to this false narrative," Khashoggi wrote of northern African and Arab nations, also criticizing the West for not taking clearer measures to stand up for a free press.

"Arab governments have been given free rein to continue silencing the media at an increasing rate. There was a time when journalists believed the Internet would liberate information from the censorship and control associated with print media. But these governments, whose very existence relies on the control of information, have aggressively blocked the Internet. They have also arrested local reporters and pressured advertisers to harm the revenue of specific publications"

After talking to the Saudi crown prince, US President Donald Trump warned against presuming that Riyadh was guilty of killing Jamal Khashoggi. In Istanbul, investigators searched the Saudi consulate for evidence. (17.10.2018)