Two weeks after the disappearance of journalist Jamal Khashoggi, the Saudi government still hasn't confessed to what it knows. Riyadh's window of opportunity is closing and that only benefits Ankara, says Rainer Hermann. 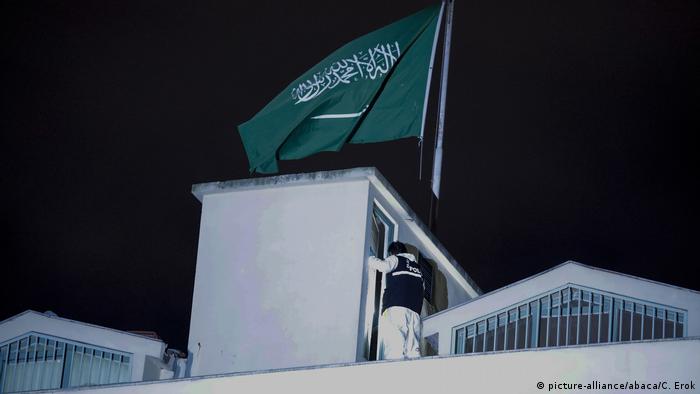 The longer Saudi Arabia takes to come up with an official explanation for the disappearance of Jamal Khashoggi, the higher the political price for the ruling royal family. Crown Prince Mohammed bin Salman will not be able to deny for long that Khashoggi was likely killed by people close to him. He will be stuck with it. That is why pressure is mounting on him to make some kind of amends, such as changing course on foreign policy — in the disastrous war in Yemen, for instance.

One thing that he can no longer change is the fact that the balance of power in the Middle East and the Islamic world has shifted dramatically over the past two weeks. One month ago, Turkish President Recep Tayyip Erdogan showed himself to be an indispensable partner to the world by mediating a compromise to avert a pending tragedy in Syria's Idlib province.

And now he is in a position to reap further political dividends thanks to his conduct throughout the course of the ongoing Khashoggi case. He has been extremely reserved and given the Saudi leadership time to prepare a statement on Khashoggi's disappearance and suspected murder at its Istanbul consulate on October 2. He also managed to create more maneuvering space for himself with the United States because he can rightly point out that he just saved its most important partner in the Middle East from falling even further into diplomatic disgrace.

Rainer Hermann is a journalist at the newspaper Frankfurter Allgemeine Zeitung

The Saudi leadership never made a secret of its rejection of the Turkish president and his policies. Relations were polite in public, but always cool rather than friendly. That was because Erdogan consistently undercut Riyadh on important political issues. He criticized the kingdom's embargo of Qatar as well as its relations with Israel, which he said came at the expense of the Palestinians.

Now Erdogan has a tool with which he can leverage Saudi Arabia into compromise — perhaps pushing Riyadh to loosen its embargo on Qatar, which would at the same time allow him to score points with the Muslim Brotherhood, which is seated in Qatar and Istanbul but despised by Saudi Arabia. Saudi financial assistance for beleaguered Turkey could also be within grasp. Aid could come in the form of Saudi investments or discounted oil deliveries.

Turkey's comportment throughout the ongoing Khashoggi case will also improve its frosty relations with Washington. The US Justice Department — which is designed to operate somewhat independently from the White House — will not fulfill Ankara's wish and extradite Turkish cleric Fethullah Gulen. However, the Trump administration will not likely continue to block Turkish requests before the International Monetary Fund should Ankara ask for help there. Turkey could also increase pressure on Washington to withdraw support for Kurds in northern Syria, giving Ankara more freedom of movement in the region.

Ultimately, Turkey has used the situation to gain ground on its rivals within the Islamic world. Not only has the Khashoggi case disappointed many young Saudis, it has also eroded the moral credibility of a country whose king is bestowed with the title "Custodian of the Two Holy Mosques." The only winners in the aftermath of the reportedly gruesome incident that took place at the Saudi consulate in Istanbul are Turkey and its president, Erdogan.