Saudi Arabia has called the death of journalist Jamal Khashoggi a "huge and grave mistake," but said the crown prince had not been aware of the murder. Turkey has said it will give a full account of Khashoggi's death. 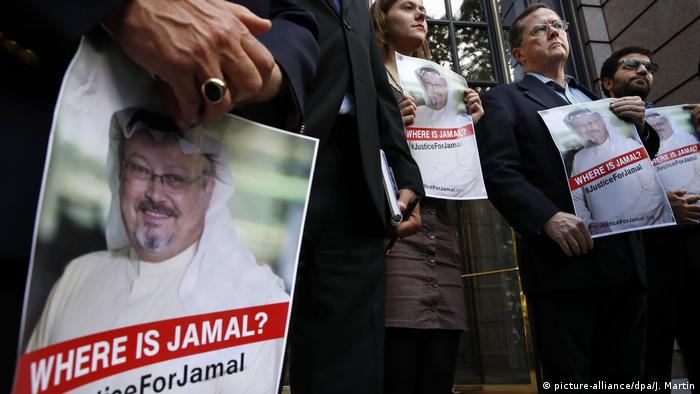 Saudi Foreign Minister Adel al-Jubeir said Sunday the Saudi government did not know how journalist Jamal Khashoggi had died, or where his body was.

When asked whether the body had been cut up — and where it was — al-Jubeir said his government was working with Turkey to find out.

He added that the killing was a "rogue operation" and an "aberration," and promised that those responsible would be punished. He also said Saudi Crown Prince Mohammed bin Salman — of whom Khashoggi has been highly critical — had not been aware of any assassination plot.

"There obviously was a tremendous mistake made and what compounded the mistake was the attempt to try to cover up. That is unacceptable in any government. These things unfortunately happen," al-Jubeir said.

Saudi King Salman and the crown prince have offered their condolences in a phone call to the journalist's son, Salah Khashoggi, who "expressed his sincere thanks" to the royals, the Saudi Press Agency reported.

Meanwhile, Turkish President Recep Tayyip Erdogan has pledged to provide a full account of Khashoggi's death in a speech slated for Tuesday.

Turkish officials have already said Khashoggi was murdered and dismembered by a 15-man squad sent from Saudi Arabia. They say they are in possession of audio and video evidence to back up the claim, but have not released any proof.

Turkish media on Sunday said 18 Saudi nationals had been arrested in connection with the case and that some 45 people in total had been summoned for investigation.

Erdogan and US President Donald Trump had agreed in telephone talks that the circumstances leading to Khashoggi's death "should be clarified in all its aspects."

Saudi officials have said Khashoggi was killed in a "fistfight" at the kingdom's consulate in Istanbul, having previously insisted he had left the building. Khashoggi, a columnist for The Washington Post, had entered the consulate to seek the necessary paperwork to marry his Turkish fiancee.

Earlier Sunday, Germany, France and Britain urged Saudi Arabia to explain how Khashoggi had died at the country's consulate.

In a joint statement, the three countries said there was an "urgent need for clarification of exactly what happened." They added that the Saudi explanation needed to be backed by facts to be considered credible.

Echoing similar comments from other Western leaders, German Chancellor Angela Merkel has said the Saudi explanation was insufficient and that the people responsible for Khashoggi's death "must be held accountable."

Company leaders are backing away from the Saudi-organized business conference after the mysterious disappearance of a prominent Saudi government critic. Virgin group even halted talks for a $1 billion investment. (12.10.2018)