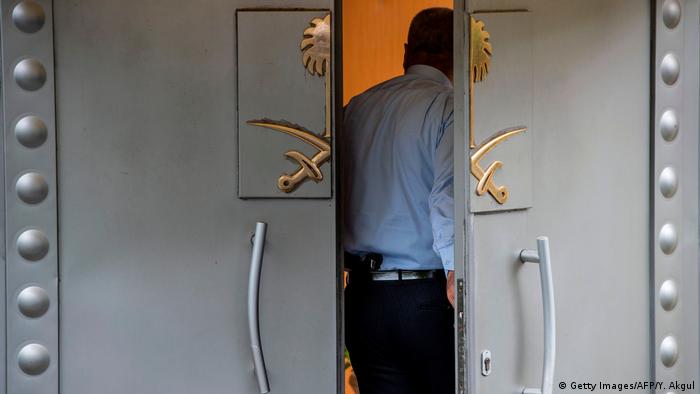 The people responsible for the death of Jamal Khashoggi "must be held accountable," German Chancellor Angela Merkel and Foreign Minister Heiko Maas said in a joint statement on Saturday, after Saudi Arabia admitted that the 59-year-old reporter had died in the Saudi kingdom's consulate in Istanbul.

Merkel and Maas condemned the reporter's death "in the strongest possible terms."

"We expect transparency from Saudi Arabia regarding the circumstances of the death and its background," they said in the statement issued by the Foreign Ministry.

"The available information on the events in the Istanbul consulate is insufficient," they said.

Commenting on the latest Saudi statement on Saturday, Merkel said "nothing has been explained so far and we need to explain it."

In an interview with German broadcaster ARD, Maas said he opposes exporting German weapons to Saudi Arabia "as long as these investigations continue, as long as we don't know what happened there."

"Up to this point we've had more questions than answers," he said.

The oil-rich kingdom is the second-largest buyer of German arms, behind only Algeria. Berlin approved €416.4 million ($480.1 million) of weapons exports to Riyadh during the first nine months of 2018.

Social Democrat (SPD) leader Andrea Nahles told the Bild am Sonntag newspaper that after "such an incomprehensible occurrence," Germany's relationship with Saudi Arabia, including its arms deals, should be reviewed.

"There have to be noticeable consequences," she said.

"I don't know if we should put all relationships on ice, but, in any case, I believe we have to continue to be extremely critical of arms exports to Saudi Arabia," he told Deutschlandfunk radio. He also pointed out that Germany had "drastically reduced" the number of  dangerous small arms exported to Saudi Arabia.

"They require an exhaustive and diligent investigation to establish exactly who was responsible and ensure that those guilty of the murder of Mr. Jamal Khashoggi answer for their actions," he said.

Canada echoed calls for a "thorough" investigation and condemned the Saudi account as lacking in "consistency and credibility."

"Those responsible for the killing must be held to account and must face justice," Foreign Minister Chrystia Freeland said.

Earlier, Riyadh said Khashoggi, a columnist for The Washington Post, had died when "discussions" between him and people he met at the consulate "dissolved into a fistfight."

"The investigations are still underway and 18 Saudi nationals have been arrested," said a statement from the Saudi public prosecutor. Royal court adviser Saud al-Qahtani and deputy intelligence chief Ahmad al-Assiri, both close aides to Crown Prince Mohammed bin Salman, have been fired, the statement added.

Ankara will 'never allow a cover-up'

The announcement marks a sharp break with previous accounts of the Khashoggi case. For 17 days after the reporter's disappearance, the kingdom claimed he had safely left the diplomatic compound.

In contrast, Turkish media have reported that Turkish investigators have evidence, including recordings, that Khashoggi was tortured, killed and dismembered by a Saudi hit squad sent to the consulate ahead of his arrival.

"It's not possible for the Saudi administration to wiggle itself out of this crime, if it's confirmed," said Numan Kurtulmus, deputy head of the Justice and Development Party, adding that Turkey would share "conclusive evidence and findings" after the probe is completed.

US President Donald Trump told reporters on Saturday that he was not satisfied with Saudi Arabia's account of Khashoggi's death, but warned against halting Saudi arms sales in response.

Speaking in Nevada, he added that it was possible Prince Mohammed had been unaware of the killing.

The remarks differ from earlier comments in which he urged presumption of innocence for Riyadh and said he found the kingdom's account credible and a "good first step."

International human rights watchdog Amnesty International has said the Saudi account was "not trustworthy" and called on Riyadh to produce Khashoggi's body so that independent forensic experts might determine the cause of his death.

Amnesty's Middle East director of campaigns, Samah Hadid, also called for an investigation to be headed by the UN Secretary-General Antonio Guterres in order to avoid a "Saudi whitewash."

An international probe would also curb the efforts of other governments to "sweep the issue under the carpet to preserve lucrative arms deals and other business ties with Riyadh," she added.

'The Saudis will find a scapegoat' for Khashoggi, says exiled Prince Khalid

In an interview with DW, Prince Khalid bin Farhan al-Saud accused Saudi Crown Prince Mohammed bin Salman of being behind the alleged murder of journalist Jamal Khashoggi. He currently lives in exile in Germany. (18.10.2018)

The Turkish leader will be in Saudi Arabia for a two-day visit where relations "will be reviewed." It will be Erdogan's first visit since the 2018 killing of journalist Jamal Khashoggi at the Saudi consulate in Istanbul.

A Turkish court has confirmed transferring the case of murdered journalist Jamal Khashoggi to Saudi Arabia — a move that his fiancee and rights groups warned could lead to a cover-up of the killing.

Turkey to agree transfer of Khashoggi trial to Saudi Arabia 01.04.2022

Jamal Khashoggi, an outspoken critic of the Saudi royal family, was killed in Istanbul's Saudi consulate in 2018. The justice minister has agreed to a Turkish prosecutor's request to move the trial to Saudi Arabia.