A high-level intelligence official has been fired and 18 Saudi nationals have been arrested. Turkey's ruling party has responded, saying Ankara will "never allow a cover-up" of the killing of the Saudi journalist. 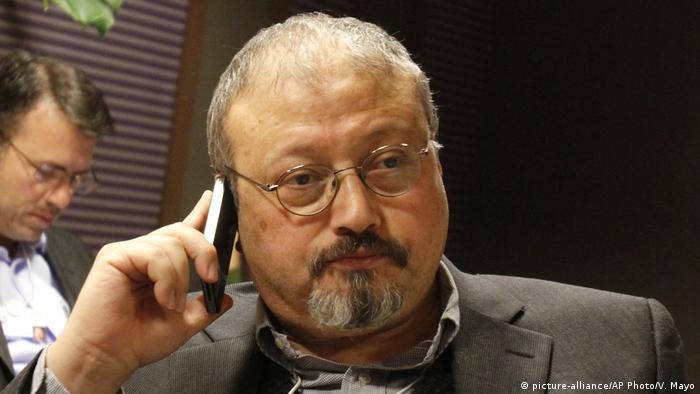 The preliminary results of a Saudi investigation into missing journalist Jamal Khashoggi confirm that he died at the Saudi consulate in Istanbul, Saudi state media reported on Saturday.

Khashoggi died following a "fistfight" at the consulate, according to the state-run Saudi Press Agency (SPA).

"The discussions between Jamal Khashoggi and those he met at the kingdom's consulate in Istanbul ... devolved into a fistfight, leading to his death," SPA reported, citing the public prosecutor.

"The investigations are still underway and 18 Saudi nationals have been arrested," a statement from the Saudi public prosecutor said, adding that royal court adviser Saud al-Qahtani and deputy intelligence chief Ahmed Asiri have been sacked from their positions.

"It's not possible for the Saudi administration to wiggle itself out of this crime if it's confirmed," said Numan Kurtulmus, deputy head of the Justice and Development Party.

Khashoggi, a critic of Saudi Crown Prince Mohammed bin Salman, went missing after entering the Saudi consulate in Istanbul on October 2 to obtain documents for his upcoming marriage to a Turkish citizen.

Pro-government Turkish media have repeatedly claimed Khashoggi was tortured and decapitated by a Saudi hit squad inside the consulate, but Turkey has not yet revealed details about the investigation.

Saudi Arabia had previously rejected accusations that Khashoggi died at the consulate as "baseless." State media also downplayed allegations from Turkish officials that a Saudi "assassination squad," including an official from Crown Prince Mohammed's entourage and an "autopsy expert," flew in ahead of time and laid in wait for Khashoggi.

A senior Turkish official said Turkish investigators are likely to find out what happened to Khashoggi's body "before long."

"We'll find out what happened to the body before long," the senior official said. "The DNA is being procured from within Turkey. It seems there will be no need to ask Saudi Arabia at the moment."

Saudi King Salman ordered the formation of a ministerial committee, which Crown Prince Mohammed will head, to restructure the general intelligence agency, according to SPA.

The committee will also include the interior minister, the foreign minister, the head of the intelligence agency and the chief of homeland security. According to the king's order, the committee is to report back to him within a month.

The Saudi leadership said it is keen "to prevent the recurrence of such a grave error in the future," SPA reported, quoting a Foreign Ministry source.

The disappearance of Khashoggi, who was a US resident and Washington Post columnist, caused tension between Saudi Arabia and Western allies, with countries including the UK, Germany and France pressing the Saudis for information on his disappearance.

Erdogan and Salman "emphasized the importance of continuing to work together with complete cooperation," an anonymous Turkish presidential source told the Associated Press news agency.

White House spokeswoman Sarah Huckabee Sanders said the US was "saddened to hear confirmation of Mr. Khashoggi's death, and we offer our deepest condolences to his family, fiancée and friends."

"We will continue to closely follow the international investigations into this tragic incident and advocate for justice that is timely, transparent and in accordance with all due process," she said.

US President Donald Trump said on Friday that consequences would "have to be very severe" if it turned out that Saudi Arabia was responsible for Khashoggi's death, adding that it was still "a little bit early" to draw conclusions and that he found the explanation of Khashoggi's death credible.

The Gulf Arab state "commends directives and decisions of Saudi King Salman on the issue of Kashoggi," the official news agency WAM said on Twitter.

"A lot still remains uncertain. What happened? How did he die? Who is responsible? I expect and I hope that all relevant facts will be clear as soon as possible," Rutte told reporters in Copenhagen. "Thorough investigation is necessary."

Britain said it was considering the "next steps."

"We send our condolences to Jamal Khashoggi's family after this confirmation of his death. We are considering the Saudi report and our next steps," the foreign ministry said in a statement. "As the Foreign Secretary has said, this was a terrible act and those responsible must be held to account."

US calls on Turkey to release Jamal Khashoggi murder proof

US President Trump has said he asked Ankara to release evidence it claims proves the reporter was slain by Saudi agents. The US has also denied helping Riyadh cover up the suspected murder. (18.10.2018)