German Defense Minister Ursula von der Leyen has called for greater commitment from the Malian government to ensure peace. So far so good, but that's not enough, says Daniel Pelz. 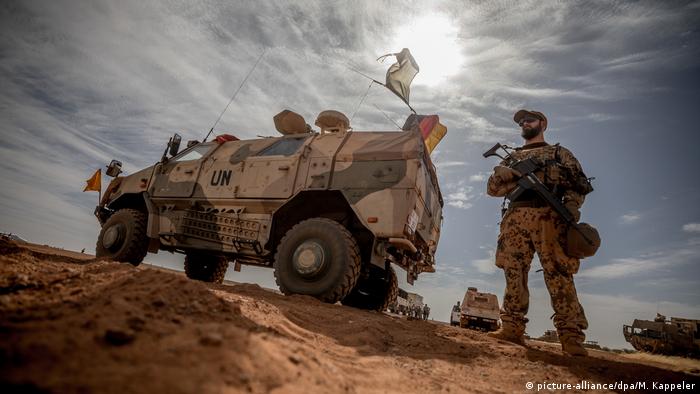 Mali is challenging. Mali is dangerous. But for the Bundeswehr, Germany's armed forces, Mali is just a kind of adventure playground in the desert, judging by a YouTube series produced by the defense ministry. Against this background, it is refreshing to see the defense minister indicate that the situation is a lot more serious. Von der Leyen is calling for Mali's government to speed up the implementation of  the peace process. That's putting it diplomatically. Five years after French soldiers drove Islamist extremists out from the north and peacekeepers moved in, the desert nation in West Africa has little to be proud of.

Almost 14,000 peacekeepers are stationed there – on what is considered to be the most dangerous UN mission in the world. In many regions, attacks happen on a daily basis. Only hours before the minister arrived to visit German troops in Gao, several people were killed in a suicide attack. In the second round of voting in presidential elections, more than 500 polling stations remained closed due to fear of terrorist attacks. Participation was in any case poor, a sign of the low esteem in which many Malians hold their politicians.

Both sides should do more

Now the German minister is openly expressing criticism. That is a good first step but it does not go far enough.

Of course the Malian government must do more for peace. And of course it sometimes looks as if the government prefers to leave the country's security in the hands of foreign troops. But it's not only Mali's government which needs to do its homework. The defense ministers in Berlin and Paris must do their bit too.

For example, concerning the UN MINUSMA mission in which some 850 German soldiers are involved. For them, it is a tough and dangerous job. But many Malians no longer take such a positive view of the mission as the pictures of waving children in the defense ministry's YouTube series would have us believe. On the streets of Gao voices can be heard saying the soldiers are holed up in their camps rather than ensuring peace. Reason enough to rethink the mission's concept.

It's little better with the European Union's EUTM mission. Soldiers from EU countries, including Germany, train Malian solders so that they will be able to ensure security in their own country. But  there have been accusations of serious human rights violations. Such a force can hardly win the confidence of the population.

Next year, the German parliament, the Bundestag, will again vote on whether the Bundeswehr should continue to take part in both missions. That is an opportunity to move beyond the usual verbal sparring and hold a serious debate on how the missions could be made more effective. And on how Europe should deal with Mali's government if it remains inactive. But if Geman politics just forgets Mali again until the next parliamentary vote, then the future is pretty clear. When top German politicians next pay a visit, they will again make some critifcal remarks – which will not help Mali's long-suffering population.

Cisse still refuses to recognize the victory of incumbent President Ibrahim Boubar Keita in last week's runoff election, alleging electoral fraud. He spoke to DW in an exclusive interview to explain his concerns. (20.08.2018)

African leaders have gathered in Mauritania's capital for talks on combating extremism, ahead of a meeting with French President Emmanuel Macron. As the summit kicked off, an extremist attack killed four people in Mali. (02.07.2018)