Could a withdrawal of the US "nuclear umbrella" embolden Russia? As Europe mulls over coordinated security, German-French cooperation could form the bedrock of such future initiatives, though it wouldn't be easy. 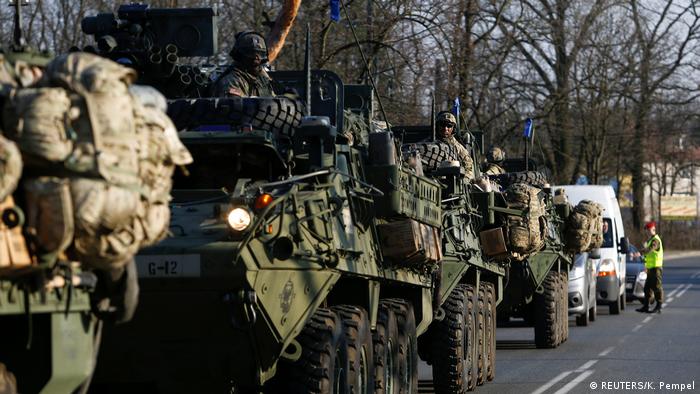 German Chancellor Angela Merkel says it's time for Europe to take its fate into its own hands, given a Trump administration attitude toward European defense that's too tepid for the comfort of some NATO governments. Countries that are underspending may naturally be feeling overexposed, with the US threatening to "moderate" support for those not meeting the alliance mandate of two percent of GDP budgeted for defense. If US President Donald Trump made good on his threats, what kind of security could Europe provide itself?

- Grappling with facts in the age of Trump

Former European Defense Agency official Nick Witney believes there's never been a more pressing need - nor a better opportunity - for Europe to get serious about this. With Trump's threats coming from one direction and Russia's from the other, the election of France's new cool-headed president, Emmanuel Macron, gives Merkel the best set of circumstances she's going to get for shoring up Europe's self-reliance.

Witney, who's now with the European Council on Foreign Relations, said Europe should quit whining and see this as a helpful wake-up call. "It's just been all too easy to recognize what needs to be done and say 'maybe next year when the budget situation is easier,'" Witney told DW. "There needs to be a rigorous stocktaking of where we are missing stuff, where we are spending large sums of money hanging on to things that are of no use to man or beast anymore and where we need to cut out all the useless wasteful duplication."

When European governments tried to take the lead in 2011 with what would eventually become a NATO military intervention in Libya, they could not provide their own intelligence, reconaissance or surveillance systems and quickly ran out of basic necessities like ammunition, forcing them to rely on the US for support. Witney said at that point, "we should finally have got around to decommissioning hundreds of thousands of dumb bombs and spending a lot of money on smart munitions." But he's "pretty damn sure" that still hasn't happened.

Sven Biscop, director of the Egmont Institute, Belgium's Royal Institute of Foreign Relations, agreed Europe's best hope for self-sufficiency is to finally cooperate on defense investments and expenditures. With what Biscop calls the "Trump First" policy, he told DW that US interests may or may not coincide with Europe's and when they don't, Europe won't have a choice about whose hands hold its fate. Therefore, Biscop recommends a "Europe First" attitude be adopted to match.

While Biscop believes the notion of a traditional Russian military threat to Europe is far-fetched, he said that's more because Russia is weaker than it looks. The 28 EU member states together, with 1.5 million people in uniform, are stronger, but not strong enough, he emphasized. "When it comes to projecting forces outside our own territory, then we can't without the US because we have not invested in the strategic enablers - long-distance transport, satellites, drones, air-to-air refueling," Biscop said.

He underscored that developing these capabilities should be Europe's priority, hoping Merkel and Macron align themselves toward building a core group of countries that would share the cost of these "big-ticket items." It would be a difficult task, not least because each national defense industry is reluctant to give up its niche. Biscop said the size of pooled orders would not only make those economic concerns less critical, but the magnified capabilities would render the much-ballyhooed two percent of GDP "obsolete."

'We Europeans have our fate in our own hands'

Another NATO-watcher, the German Marshall Fund's Bruno Lete, agreed Europe is hamstringing itself despite possessing one of the world's most powerful and technologically advanced armed forces. "Without the unique coalition-building capacity of the United States inside NATO, today Europe would struggle to unite and effectively organize its own defense," Lete said, citing the need for US strategic enablers "and the command-and-control and intelligence and surveillance platforms."

"It is particularly in these domains that Europe is lacking punch, and where the US is adding so much value," Lete said. "If Europe is to take care of its own defense, it is this gap that it will have to address first." 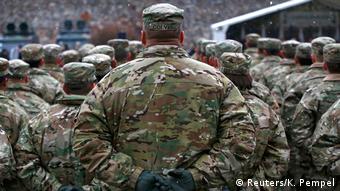 The ECFR's Witney would put a different concern at the top of his list: the potential loss of what he calls the "ultimate backstop" of US nuclear capabilities. He believes that while Russia is currently able but unlikely to invade the Baltic states, for example, "if there was a doubt about the American nuclear guarantee, then it might just be tempting for a hawk in the Kremlin to say 'well we can push this because they know at the end of the day they will have to back down.'"

With the British relationship to Europe in limbo due to Brexit, the job of a European nuclear deterrent would fall to France. Extending the French nuclear deterrent to the rest of Europe would require not just a technological but also an attitude adjustment, Witney explained, and not just by the French, who he says have never been eager to share. "The Germans haven't liked being under anyone's nuclear umbrella," he said, "but if they are, they'd rather be under the Americans' nuclear umbrella than the French's, giving themselves airs and graces as the 'protectors of Europe.'"

Witney said Europeans are just going to have to get over that, and find ways of "mutualizing" the nuclear umbrella, as well as sharing responsibilities and costs.

The alternative to dropping these industrial, political and psychological barriers? As a British citizen, Witney laid out a stark scenario. "As it becomes increasingly clear what awful fate awaits a country that steps out of the European community of nations, [Britain] will be the rotting corpse on the far side of the channel," he said. "We will inadvertently serve as a dreadful warning for people who forget about European solidarity."