More questions than answers about NATO′s Libya role | World | Breaking news and perspectives from around the globe | DW | 22.11.2011

The reasons and the consequences behind NATO's bombing on the Libyan town of Majer still remain unclear three months on. Deutsche Welle visited the scene of one of the darkest episodes in Libya's war. 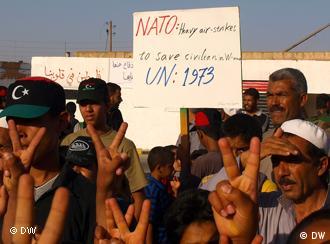 NATO's role in Libya is still under scrutiny

Ali Ahmed welcomes us into a makeshift funeral chapel set up amid the rubble of his former house. Once inside, it's impossible to avoid gazing at the 35 portraits hanging on the walls of this small room.

Majer, a town 160 kilometers (99 miles) east of Tripoli, used to be known for its delicious juice made from dates. But since August 8, Majer has been a name closely linked to what may have been NATO's biggest massacre in Libya. One of the residents, Ali Ahmed, was a witness to those events.

"There was a giant blast just after 11 pm. Everything happened very quickly," Ali told Deutsche Welle before pointing to the portrait of Anan, his sister. Two 500-pound bombs dropped from the air sandwiched the three floors of this house killing 14 people - five of them children - and injuring many more.

Ali was lucky because he was sleeping in his room on the ground floor, the only one which was not reduced to rubble. Around us, mattresses, shoes and books still litter the area.

"There were two more families at home, one from Benghazi and ours," Ayed Hamid, another survivor, told Deutsche Welle. He lost his brother Salim. Three of the five children killed were his nephews.

"Do you know why NATO bombed our house?" asked Ayed, with a genuine sense of curiosity that seemed to belie his pain.

Apart from the 14 victims of that house, 21 other people were trapped in the debris of another residence that came under attack. Two other homes were also destroyed that night but they were empty. 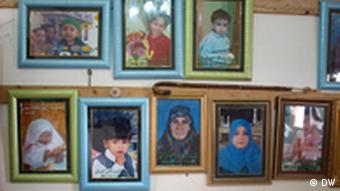 Some of the 35 alleged victims of NATO's strike in Majer

Muhammed Ali Jarud survived the strike on the second house.

"The first was after 11 pm. By 1am many people had gathered to help us rescue the bodies from the rubble, and then came another bomb," he told Deutsche Welle. The 26-year old lost his mother in the bombing but also a sister, her husband and their eight-day-old baby. He says three other relatives, who suffered terrible injuries, were sent to Germany for surgery.

"We had gathered for the iftar - the meal that breaks the daily fast during the month of Ramadan," Muhammed recalled. Today he works hard with three friends to rebuild a house to move into before winter comes.

"We always help each other, otherwise we would not be able to survive," said Muhammed, who only agreed to talk to us once we were out of sight of Majer's new authorities.

"We have many problems with the rebel militias and we don't want to be spotted talking to journalists."

Muhammed's fears are not unfounded as arbitrary arrests in Gadhafi's former strongholds are a common occurrence in post-revolution Libya.

What exactly happened in Majer is difficult to reconstruct. Most of those affected are remaining silent as is the mainstream media. It's impossible to retrace the events in Majer with the information provided by the former government, the handful of reporters who were taken on a daytrip from Tripoli and NATO's reports. At this point, many feel that the only certain thing about Majer is that somebody, if not everybody, is lying. 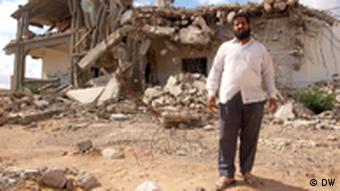 Ali Ahmed claims his house was obliterated in a NATO strike

On the morning of August 9, then Gadhafi spokesman, Moussa Ibrahim, accompanied a delegation of foreign journalists to the scene. The figures provided by the Libyan government and repeated by Ibrahim himself spoke of 85 victims, including 33 children. The journalists were shown 30 bodies in the local morgue. The other 50 had reportedly been transferred to other family burial places and the badly wounded to Tripoli.

According to Ibrahim, NATO's of bombing Majer was meant "to clear the way for rebels to advance on the embattled Gadhafi-controlled city of Zlitan, 10 kilometers to the north."

"This is a crime beyond imagination," concluded Gadhafi's spokesman.

After Ibrahim's statements, foreign journalists attended the funeral of 28 bodies, each covered with the green flag representing Libya's ousted regime.

Forty-eight hours after the first bomb destroyed Ahmed's house, NATO claimed to have a comprehensive record of what had happened. "Four buildings and nine vehicles targeted the site between 23.33 on Monday and 02.34 on Tuesday."

The times of the attacks matched the testimonies of Majer residents, but not the description of the objectives.

"Our assessment, based on the level of destruction of the buildings, confirms the likelihood of military and mercenary casualties. The allegation of civilian casualties made by the Gadhafi regime was not corroborated by available factual information at the site," explained NATO's deputy spokeswowman, Carmen Romero, and Colonel Roland Lavoie at a joint Naples-Brussels press conference. "We always take extraordinary measures before a strike to protect civilians," added Lavoie. 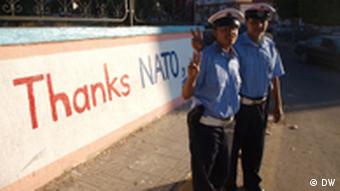 Libyan rebels have acknowledged NATO's decisive role in the war

Despite the numerous requests by Amnesty International and the United Nations to investigate alleged civilian casualties in Majer as well as in the rest of Libya, NATO appears to be sticking to the same protocol as in Afghanistan by systematically denying any accusations and, therefore, closing the doors on any further investigations.

Like many others, nobody has apologized to Milad Ibrahim for his terrible loss. The 33-year old gets emotional every time he visits his brother's grave. He knows Mustafa has been laid to rest in an area of around 20 square feet, but not exactly where. However, he always says his prayers from the northern section of the humble graveyard.

"We buried the remains of the men on this side and the womens' on the other. We could not identify many of the bodies," Milad told Deutsche Welle, while keeping an eye on the militia's patrols criss-crossing Majer in their pick-up trucks.

Three months after NATO's strikes, recognition of any kind for Ibrahim and the rest of the families seems further away than ever. There is no reason why their claims should be taken at face value but everything here suggests that something significant happened last August.

For now it seems that for many of those families, their treatment at the hands of Libya's new regime may well be the more pressing issue.

With Gadhafi and his troops now finally defeated, NATO's intervention in the skies above Libya appears to have been a success. But the mission was risky, and may not be a good model for the future. (31.10.2011)