Libya struggles to maintain order in the face of post-Gadhafi chaos | World | Breaking news and perspectives from around the globe | DW | 17.11.2011

Although Libya's revolutionaries managed to destroy the Gadhafi regime with the help of NATO, the country's interim leaders are sitting on a political powder keg as they struggle to establish law and order amid chaos. 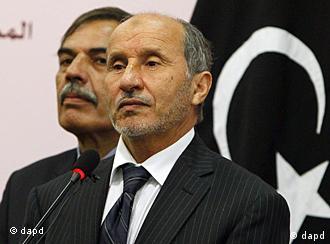 The role of Islam in Libya's future remains disputed

The tasks facing Libya's Western-backed interim government in trying to restore political and social order are big enough as it is. Now, there's an additional challenge in the form of massive unsecured weapons stockpiles which threaten to destabilize the broader region. Revolutionary military councils have been engaging in skirmishes as retribution killings against alleged Gadhafi loyalists jeopardize the reconciliation process.

In western Libya outside the capital, Tripoli, fighters from the coastal city of Zawiya have clashed with armed tribesmen from Warshefana. The skirmishes killed at least 13 people during four days of fighting that saw heavy gunfire and the use of rocket propelled grenades, according to reports by the Associated Press. The cause of the clashes remains unclear.

Human Rights Watch (HRW) has gathered mounting evidence of human rights abuses committed by forces associated with the National Transitional Council (NTC). Militias from the northwestern coastal city of Misrata - which suffered a brutal months-long siege at the hands of Gadhafi - have arbitrarily killed and detained residents and burnt homes in the now abandoned town of Tawergha, according to HRW. Many Tawergha residents fought for Gadhafi during Libya's civil war.

And in Gadhafi's hometown of Sirte, where the Libyan dictator was captured and killed, HRW reported finding the bodies of 53 regime loyalists who had apparently been summarily executed at the hands of revolutionary forces allied with the NTC. Attacks have also reportedly occurred against black-skinned Africans accused of having fought for Gadhafi as mercenaries.

"To the extent that there are these kinds of revenge attacks and this sort of division in the country of punishment for people who were loyal to Gadhafi, it will be very hard to transition in the direction the country needs to transition, which is accountability for past crimes but also reconciliation," Whitson said.

During the uprising against Gadhafi, Libyans spontaneously organized themselves into militias and military councils with a large degree of autonomy from the NTC, which served as an umbrella organization for the opposition. The interim government now faces the challenge of integrating these often competing groups into a unified and politically coherent Libya, a task that requires state institutions which currently do not exist.

"We don't have any previous model," Noman Benotman, a former Islamic radical who helped set up the Libyan Islamic Fighting Group, told Deutsche Welle. "The [Gadhafi] regime completely collapsed - destroyed. There are no institutions whatsoever. Everything has to be started from scratch."

Benotman, who now works against Islamic extremism for the Quilliam Foundation, said that the political and security vacuum in Libya has led to a growing conflict between secular, liberal and Islamist forces. NTC Chairman Mustafa Abdul-Jalil sparked concern in Western capitals when he announced last month that Sharia would be the basic source of law in the post-Gadhafi Libya.

Alleged Gadhafi loyalists have been the targets of arbitrary violence

Although Benotman believes that Jalil was expressing solely personal views and claims Libyans are overwhelmingly moderate Muslims, he acknowledged that questions about the role of Islam in a post-Gadhafi Libya cannot be ignored.

Benotman said that in order to prevent Libya from sliding into chaos, the militias must submit to the chain of command under a national army. A justice ministry, backed by a real judicial system, also needs to be established to prevent more abuses in the future, he added.

And the laws still on the books from the Gadhafi era that prevent freedom of assembly and speech need to be replaced by constitutional civil rights guarantees, according to HRW's Whitson.

"First and foremost, as soon as there is a new government in Libya, there needs to a real true thorough revision of the legal framework in the country," she said.

As the NTC struggles to guide Libya through a volatile transition, massive unsecured weapons stockpiles - left over from Gadhafi's arsenal - pour more fuel on the country's already explosive political situation. Acquired over a period of decades from nations that range from Spain to North Korea, Gadhafi's massive arsenal includes everything from small arms to surface-to-air missiles and explosives. 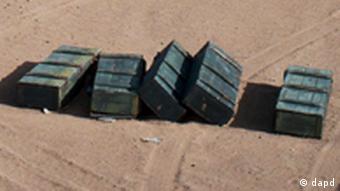 Libya is flooded with unsecured weapons and ammo stockpiles

Libya ranked for years as the country with the most weapons per soldier in the world, according to Peter Bouckaert with HRW, who personally surveyed the stockpiles in Libya during the civil war.

"Basically the whole country is a massive weapons storage facility," Bouckaert told Deutsche Welle via email. "I visited similar facilities in Iraq in 2003, but the amount of weapons and munitions in Libya is vastly greater."

Gadhafi moved some of these weapons into open fields and private warehouses in a bid to hide them from NATO's crosshairs during the air campaign, Bouckaert wrote. Many facilities were simply abandoned and subsequently left unsecure for weeks as the rebels advanced, allowing virtually anyone to loot with little or no control and sell the weapons across international borders.

"There is a market where there is strong demand in places such as in Darfur and the borderlands between Chad and Sudan, particularly for higher value and more unique weaponry which has been difficult to obtain, again we're talking about anti-armor and anti-aircraft portable weapons," Hugh Griffiths, an expert on the small arms trade with the Stockholm International Peace Research Institute, told Deutsche Welle.

Western nations have expressed concern that Gadhafi's large stockpile of man-portable air-defense systems could fall into the hands of regional terrorist groups such as Al Qaeda in the Islamic Maghreb and be used to target civilian airliners. But Bouckaert is just as concerned about the large stockpiles of potentially devastating explosive material.

"The massive stockpiles of explosive weapons should be of equal concern as they can be used to create havoc in Libya and the broader region," he said. "[They] can also easily be converted into car bombs and suicide bomb devices."