′If justice doesn′t start now, Libya will become a second Afghanistan′ | World| Breaking news and perspectives from around the globe | DW | 02.11.2011

As Libyans begin to enjoy their new-found freedom, the country faces a myriad of problems in the months ahead. A former exiled Libyan tells Deutsche Welle about the dangers of Libya turning into the next Afghanistan. 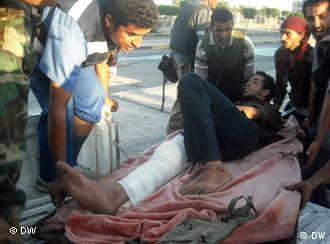 Down but not out: Libya needs help to rebuild

Fouad Ali Takbali is head of the Tripoli Free Aid Organization and spent many of his years in exile in Germany.

Deutsche Welle: When and how did you set up Tripoli Free Aid?

Fouad Ali Takbali: I had been an exile for 26 years and I thought that I had to help my people when the war started in February. We started working from Djerba (Tunisia) in March, gathering basic supplies - food, water, clothing and medicines - for the refugees fleeing Libya. By April there were already 200,000 Libyan refugees in Tunisia. Even when we were abroad, our office was attacked by Gadhafi loyalists in Djerba. We then knew that Gadhafi had put out a bounty of 2,000 euros ($2,755) to kill me.

But you were already based in Tripoli, is that right?

Yes, we set up our office after the revolutionaries took over the city two months ago. We work on private funds, most of which come from Germany, where I spent the last 16 years. Basically we're trying to tackle the same problems we used to back in Tunisia, but this time on Libyan soil. Other than the regular aid, we're also running campaigns to raise public awareness on things such as the constant shooting in the air by local militias.

What are the main and most urgent problems in post-Gadhafi Libya?

As you must have checked yourself, Tripoli is overrun by people carrying guns, there's an overwhelming amount of them among the civilian population. Another emergency is the one posed by the internally displaced people. Many of them cannot go back home because they are destroyed and they're gathering in makeshift refugee camps.

There are 120 families who have registered in the makeshift refugee camps in Tripoli but their number could be much higher. Most of them are living in terrible conditions on the outskirts of Tripoli. We are working to host them temporarily in the construction companies' former barracks. Last but not least is the mistrust among Libyans. Many people are thinking of revenge and that's probably the biggest hurdle for Libya in the short term. It's impossible to look toward the future that way.

The war is officially over why then are there so many armed people on the streets? 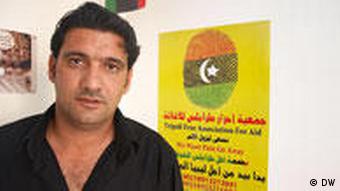 There are several reasons but, above all, I'd say that it's because nobody trusts each other here. The Misratans, the Zintanis, the Amazighs… they're all saying that they won't give up their weapons because they're all too afraid of each other. That very fear is the one Gadhafi enforced during the four decades he stayed in power. We could also put the blame on the lack of education among many of the fighters and, at the same time, on the lack of opportunities. They'll have nothing better to do than to drive around fully armed unless they get a decent job. I'm afraid the new administration will literally have to buy the weapons from the soldiers.

Do you think that the National Transitional Council has taken the right approach toward the issue?

Absolutely not. They're busier with their foreign policy and they have forgotten about their people. They just stick to fake promises hardly any Libyan believes today. There's the mistrust among the people, and a growing one toward the NTC. Libyans today trust Europeans much more than their fellow neighbors. As I said, that's the outcome of Gadhafi's policies.

Mustafa Abdul-Jalil, the NTC's chairman, talked about the importance of reconciliation in the reconstruction of the new Libya but reports point to several abuses against alleged former Gadhafists. What's your impression?

As I said, all they say are just empty words. Those refugees from Bani Walid, Abu Salim, Tawarga, Sirte - Gadhafi's former strongholds - are facing very dire conditions and abuses, which worsen in the case of the black people. Moreover, there are reports about many people being tortured in prison today, even with electrodes. After 26 years in exile I'm most appalled to find out that, very often, the new government is sticking to exactly the same methods common under Gadhafi's rule.

If justice doesn't start acting right now, Libya will become like Afghanistan in the short term. Tripoli should be a model for the rest of the country but, instead, it's drowning amid the growing unease. The situation in Libya's capital right now is catastrophic. There's an urgent need of a civil society we've lacked for the last four decades.

Although there's large support for those foreign countries that backed the revolution, many Libyans fear they will lose control of their resources. What do you think?

That was already the case during Gadhafi so it comes as no surprise to me. America, Italy… many countries have benefited from Libya's rich resources for the last decades. The only difference is that Gadhafi isolated us from the rest of the world but today we're looking forward to resuming relations. We cannot move ahead without foreign help. Talking about NATO, I actually think it's been us who have helped them. Their part in the Libyan revolution has improved their image after it got ruined by campaigns like the one in Afghanistan.