Libya's Berbers, or Amazigh, played a crucial role in the battle against the Gadhafi regime. Now they say they feel let down by the transitional government which has as yet to recognize them and their language. 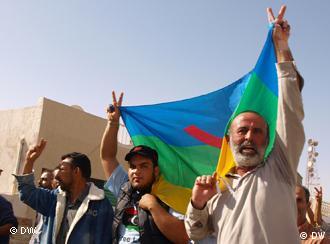 Fathi Ben Khalifa is a well-known Amazigh dissident from Libya. He lived in Morocco for 16 years until he left for The Netherlands to escape the pressure from Gadhafi on Rabat to hand him over. Ben Khalifa resumed his dissident activities from Tunisia when the revolution started in Libya and became an National Transitional Council (NTC) representative. He was part of its international delegation formed to gain recognition among the international community. He abandoned the NTC last August due to "insurmountable differences" with the rebel committee, mainly over the issue of religion and the lack of recognition of the Amazigh people (Berbers - the ed.). He was elected as the president of the World Amazigh Congress, an international organization based in Paris since 1995 which aims to protect the Amazigh identity, in October.

Deutsche Welle: You've criticized that your people "are still not recognized in the new Libya." Can you explain why?

Fathi Ben Khalifa: In the Constitution draft approved on August 6 there's no mention at all about us, the Amazighs. Neither our language nor our presence in the country are recognized. Now they're saying that we have to forget about such things for the sake of stability in the country, that we can "discuss the issue later" so we are suffering from a déjà vu feeling. How can I be a citizen in a country which does not recognize my existence?

Actually, they told us the same thing when Libya got its independence in 1951, that we had to wait until things settled down… Then Gadhafi came with his assimilation policies and a horrendous dictatorship that lasted four decades so the issue was totally out of the question. The last thing we, the Amazigh, were expecting was that the new government would also stick to the old speeches.

But you were also a member of the NTC from the very beginning, weren't you?

Yes, basically I was travelling around Europe and Africa with an NTC delegation asking for recognition. Still, I've always been aware of this risk and some others as well but I'd never raise the question because there was a war going on and we had to stick together against Gadhafi's regime. It simply wasn't the right time. But when I realised that the Amazigh had been fully ignored in the new Constitution it was very clear to me that I could not stay there any longer so I broke relations on August 20.

Does the Council fear that Libya may split at some point if it recognizes your people?

We have firmly rejected approaching politics from either a religious or a nationalist angle. The problem behind all this is that the NTC is still sticking to Arab and Islamist ideologies. They still don't realize that much of what has happened in this country for the last decades came from that "Arab-Islamist" ideology. Why did we become a very poor country with so many resources? Why are our people uneducated? Why was Libya high in the ranking of the most corrupt countries? 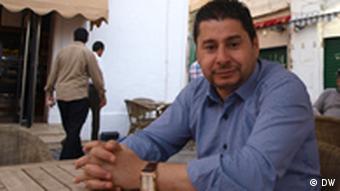 When we say that Libya is an Arab country we are wrong. Libya is not in the Persian Gulf but in North Africa. We've worried too much about external problems and forgotten about ours. Libya spent an awful lot of money in other African countries just because Gadhafi saw himself as the "king of all African kings." Besides, we also lost many young people in Iraq and Afghanistan. While our children are starving and walking barefoot in places like Sabah (south of Libya) the Palestinian issue is still a bigger priority for many Libyan people. Is the new Libyan administration going to make the same mistakes?

In fact, it would come as no surprise as those people in the NTC are exactly the same as in the previous regime. They're trying to project an image of being liberal and open-minded but the reality is that the majority of them still stick to the same authoritarian old methods. Today they're working for their own interest but completely unaware of how volatile the situation is getting in Libya, and not this is not just because of the Amazigh issue.

What are the other potential sources of unrest?

The vision of the new Libya being rooted in an Islamic Constitution. Islamic parties shouldn't be a problem as long as they get their representation through a democratic Constitution but the latter is not what they're looking for. They want an exclusive Constitution based on Islam. Moreover, they're talking about sharia - the Islamic law - but sharia can be interpreted in a million ways. Iran has got it's own sharia, as well as Pakistan, Saudi Arabia, Afghanistan, Morocco… and all of them are different from each other.

How did you feel when Mustafa Abdul-Jalil, the NTC chairman, mentioned sharia law in his Liberation speech on October 24?

That was outrageous. Who gave Mustafa Abdul-Jalil the right to say such a thing? He was just the leader of an interim government who had not been democratically elected by the people. This is yet more proof that the current leaders in Libya are unable to adapt to the new times.

So what are you, the Amazighs, going to do about it?

I'm sure no Amazigh will accept this situation. We cannot accept Libya as an "Islamic and Arab country." Some people in the NTC said that our language couldn't be officially recognized because we are a minority. Why didn't you tell us to stop when we were fighting? Ten out of 100 fighters would have put down their weapons.

We didn't fight to achieve nothing at all so we are already starting to mobilize ourselves. We had an Amazigh conference at the end of September, the biggest one in the new Libya. The following day we had the biggest demonstration of our people in Libyan history. Can you believe that nobody in the NTC bothered to call us to sit down and talk afterwards? Unfortunately, these people are uneducated and they'll only react to aggressive action because of their old mentality.

You lived in Morocco for 16 years and you also have close contacts with your people in Algeria thanks to your position. When did the "Arab Spring" vanish in these countries?

Algeria will be the next country to explode, I'm sure the revolution is underway. Algeria is a claustrophobic country under the full control of the army and they will never leave power in a peaceful way. Even President Abdelaziz Bouteflika is a puppet himself of the Algerian military. In Morocco it's different. The political regime is smarter, not military but some sort of civilian and religious regime. They followed the events and adapted quickly so that makes them safer. There's more space for freedom and higher standards of life than in Algeria, although there are still a lot of things to be improved.

After centuries of voluntary segregation in the Libyan mountains, Arabs and Berbers are forced today to live together in refugee camps in the Tunisian desert. The fight against Gadhafi could bring them closer together. (28.06.2011)

Libyan dictator Moammar Gadhafi son's hopes of running for president are dashed, as the country’s electoral commission disqualifies him.

On the day Libyans were scheduled to go to polls, Western nations have called on Libya to set a new date and finalize a list of candidates.

After years in hiding, Seif al-Islam, the son of former dictator Moammar Gadhafi, will run for president in upcoming Libyan elections. Experts believe his return complicates things even further in the unstable nation.