German Chancellor Angela Merkel said Sunday that Europe has to forge its own path forward, as the United States and Britain were no longer reliable partners.

"The times when we could fully rely on others have passed us by a little bit, that's what I've experienced in recent days," she said while speaking at a campaign rally in Munich.

Her reference was to the contentious G7 Summit meeting in Sicily, which ended Saturday with the world's democratic powers divided. Most notably they were split "six against one," as Merkel described it Saturday, on the man-made threat posed by global warming.

Even though Britain agreed with its European allies on the need to combat climate change, its decision to leave the European Union means it, too, will be going its own way on a range of issues.

US President Donald Trump, who campaigned as a global-warming denier - calling it a hoax perpetrated by the Chinese - refused to go along with his six counterparts in reaffirming their support for the 2015 Paris Agreement, which aims to cut greenhouse gas emissions in order to limit the rise in global temperatures.

"For that reason," Merkel continued, "I can only say: We Europeans really have to take our fates in our own hands."

Of course, that must be done in a spirit of friendship with the United States and Britain, she said, "But we have to wage our own fight for our future, as Europeans, for our fate." 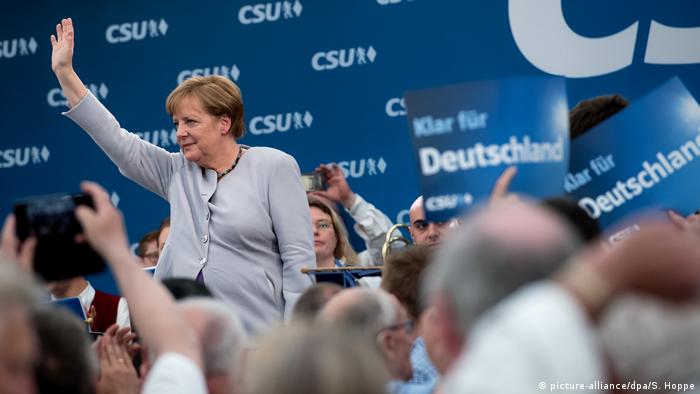 Chancellor Merkel at the rally

Towards that end, she said special emphasis was needed on warm relations between Germany and newly-elected French President Emmanuel Macron.

But global warming wasn't the only issue where Trump found himself at odds with his European counterparts.

Prior to the G7 summit he was in Brussels for a meeting with heads of state from the 28-member NATO alliance. Trump conspicuously refused to publicly endorse Article Five of the NATO charter, which guarantees that member countries will aid the others if they are attacked.

The omission was particularly striking given that Trump unveiled a memorial to the victims of September 11, 2001 terrorist attacks against the US, the only time NATO's mutual defense clause has been triggered.

Trump also criticized Germany while in Brussels, calling its trade practices "bad, very bad" and complained that too many German cars are being sold in the US.

Sunday's event saw Merkel renew ties with the Christian Social Union (CSU), the Bavarian sister party to her own center-right Christian Democratic Union (CDU), ahead of a parliamentary vote in September.

Polls show the chancellor, who has been in power since 2005, likely to be re-elected for a fourth term.

"Europe is the answer," Schulz said. "Closer European cooperation on all fronts is the answer to Donald Trump. Above all, we cannot let ourselves be subjugated to Trump's rearmament policy."

Schulz, who served as president of the European Parliament from 2012 to 2017, said European states must take a decisive approach to dealing with Trump, whose presentation and attitude in Brussels and Taormina he compared to that of a dictator.