The G7 declaration will give US President Donald Trump time to decide whether to keep the US in the Paris climate agreement. German Chancellor Angela Merkel has described the discussion on climate as "very unsatisfying." 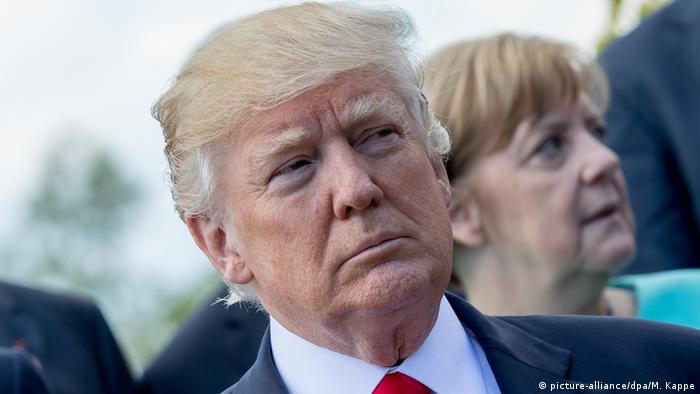 The declaration released by the Group of Seven (G7)  leaders admitted that the US was still "reviewing its policies on climate change and on the Paris Agreement and thus is not in a position to join the consensus on these topics."

All other six leaders pledged their commitment to the Paris deal. An official announcement is yet to be made.

Trump later tweeted that he would make his final decision on the Paris agreement next week.

German Chancellor Angela Merkel described the talks on climate as "very unsatisfying," adding that "there are no indications whether the United States will stay in the Paris Agreement or not."

Merkel said that the Paris agreement was so important that there should be no compromises on it. "The Paris deal isn't just any other deal," she said. "It is a key agreement that shapes today's globalization."

During last year's presidential campaign, Trump promised to renegotiate the landmark climate deal and even threatened to pull out of it altogether. Since assuming office, he has slowly rolled back a number of emissions regulations, stating that they are bad for US energy companies. The US remains the world's largest carbon emitter after China.

Whether Trump will ultimately back out of the climate agreement remains unknown. "His (Trump's) views are evolving; he came here to learn and get smarter," the US National Economic Council director, Gary Cohn, said when asked at a briefing late on Friday about the president's views on the Paris deal. National Security Adviser H.R. McMaster, who appeared alongside Cohn, said Trump would make a decision based "on what's best for the American people."

European diplomats sought to turn the deadlock into a positive, with one French official welcoming the fact that "Trump engaged in a dialogue, asked questions, received arguments and stays in the game."

The environmental organization Greenpeace decried the deadlock on climate, but remained hopeful that the US would pledge its commitment at July's G20 summit in Hamburg, Germany.

"Europe, Canada and Japan stood up today and made a stand, revealing again how far Trump is out of step with the rest of the world on climate change," said Jennifer Morgan, Greenpeace's international executive director, adding that the clean energy revolution was unstoppable. "Leaders must now keep resolve and ensure that the G20 signals even greater climate ambition.

Leaders were left wrangling over the final wording of the communique, published at the end of this year's G7 summit in the picturesque Sicilian town of Taormina and which amounted to just six pages.

The US reportedly also resisted pressure to sign up on key issues such as trade and migration, as well as climate change.

On trade, the Trump administration agreed that the final declaration include a pledge to fight protectionism. The pledge on behalf of the US marked a significant breakthrough, with Trump having previously championed protectionist measures on the back of his "America First" agenda that got him successfully elected to the White House.

"Together we will keep our markets open and act to fight protectionism, while, at the same time, ensuring that unfair trading practices will be countered vigorously," Merkel said.

Sources at the Taormina summit reported that Trump had initially pushed back against the communique's initial wording on free trade, insisting that trade must be "fair and balanced" as well as free. A senior White House official also said that Trump had told the other six leaders on Friday that the US would simply treat other countries the same way it was treated.

"In the end we convinced them (the US) to include the fight against protectionism in the final communique, so that was a step forward," said one European diplomat, speaking on condition of anonymity.

A leaked draft suggested that all seven leaders agreed on a statement backing governments' rights to impose curbs on migration.

British charity organization Oxfam referred to the G7's tough stance on migration - believed to have been strongly influenced by Trump - as a "scandal." "This is the scandal of this summit: That G7 leaders could come right here in Sicily on the doorstep of the sea where 1,400 people have drowned this year alone and fly home tonight without doing anything serious about it," Oxfam's Edmund Cairns said.

Italy was hoping to convince fellow G7 members of the positive effects of legal migration as a means of slowing down the dangerous boat trips across the Mediterranean, but that idea was dismissed by the Americans and the British.

The G7 nations will also adopt common language on North Korea following its latest series of ballistic missile tests. The communique said that the reclusive state posed an increasing threat of a "grave nature" to international peace and stability, while all states pledged to strengthen measures unless the North agreed to abandon its nuclear program. The notion was initially urged on by Japan.