Donald Trump has been sworn in as US president. His first moves as leader showcased a policy of protectionism and patriotism. 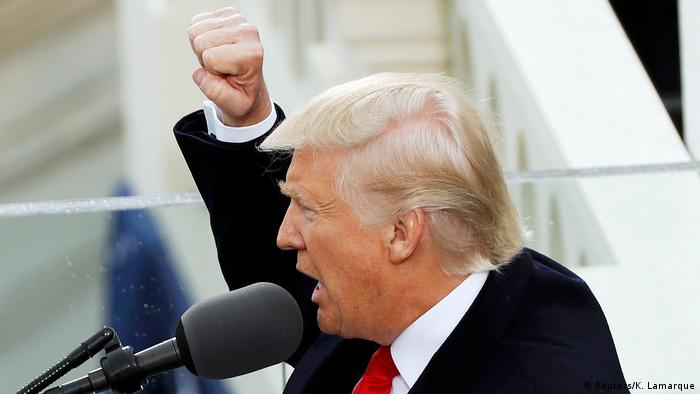 Many seats were left empty near the White House as President Donald Trump finished his inaugural parade on Friday. The newly minted 45th President of the United States concluded a lackluster day in Washington under the guiding message of "America first."

"From this day forward, a new vision will govern our land. From this day forward, it's going to be only America first," said the new president after taking the oath of office, promising to unite a divided country by promoting domestic industry and patriotism. In his short speech, Trump did little to build bridges to those who did not vote for him, despite losing the popular vote by a margin of nearly 2.9 million.

Despite the fact that his Republican party now controls both the White House and Congress, Trump added a swipe at Washington elites, saying: "What truly matters is not which party controls our government, but whether our government is controlled by the people."

After his speech, President Trump joined the presidential motorcade to ride from the Capitol building to the White House. He, along with First Lady Melania Trump and their son Barron, walked a short distance, waved at the crowds, and then got back inside their vehicle. In the background, protesters holding signs that said things like "Trump = Putin" were much more visible than the new leader's supporters.

Indeed, many news outlets noted the difference in turnout to Barack Obama's. Attendance on Friday was about half the number who came out to see Obama take the oath of office in 2009.

Although demonstrations were mostly peaceful, protesters and journalists took to social media to report that police had deployed stun grenades and tear gas and scuffles broke out between anti-Trump campaigners and security services. Fire was seen rising from a limo that had been set ablaze in the clashes, and footage uploaded to Twitter by some reporters showed some people breaking the windows of some Washington storefronts. Police later said they arrested around 200 people over the commotion.

One of the first things that marked the transition to the Trump presidency was an overhaul of the White House website, removing any mention of climate policy or legislation to protect minorities, including everyone from Native Americans to the LGBT community.

In place of the copious policy details outlined by the Obama administration were six vague descriptions of items like "America First Energy Plan" and "Making Our Military Strong Again."

"Peace through strength will be at the center of that foreign policy," according to Whitehouse.gov.

Trump spokesman Sean Spicer announced that one of the new president's first actions as president will be to create a national day of patriotism, in addition to the Fourth of July, Patriots' Day, and the two US holidays that celebrate its armed forces – Memorial Day and Veterans' Day. In fact in some states, there is already a holiday called Patriots' Day celebrating the start of the Revolutionary War.

Shortly after the Trump family entered the White House, Congress began confirming the new president's cabinet picks. Defense Secretary James Mattis quickly became the first of Trump's nominees to be approved, by a margin of 98-1. The new homeland security secretary, retired Marine Corps General John Kelly, was also confirmed by the Senate. Kelly has spoken of his support for Trump's proposed border wall between the US and Mexico.

Once in the Oval Office, the president signed his first executive order, easing regulations associated with the Affordable Care Act (ACA), also known as Obamacare. The move came despite the fact that Trump said in a Republican debate last year that he did not like executive orders, saying "nobody really knew" that "such a thing" existed in the US. With the exception of William Henry Harrison, who died 31 days into his first term, every president since George Washington has signed executive orders. 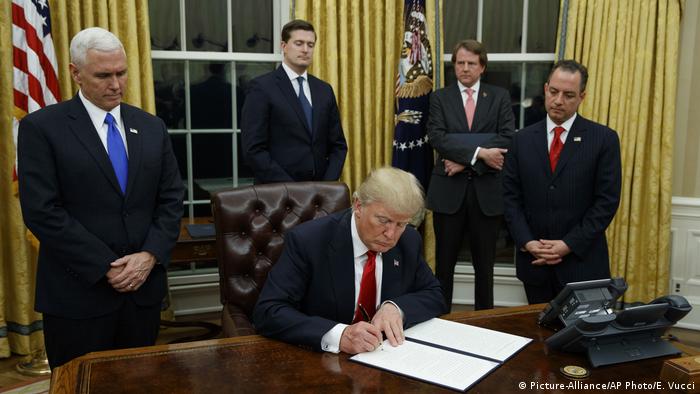 Trump also ordered an immediate regulatory freeze for all government agencies, although Spicer did not elaborate what that would entail when it was announced.

Photos of the president's office showed a few subtle changes from its previous occupant. A bust of civil rights icon Martin Luther King Jr had been replaced by a bust of former British Prime Minister Winston Churchill, and red drapes had been replaced with golden ones.

"It was a beautiful day," Trump told reporters in a brief statement.

Donald Trump has taken the oath of office to become the 45th US president. Follow us live as DW reports on everything you need to know about the controversial real estate mogul and his historic inauguration. (20.01.2017)