German officials and the public are unimpressed by the festivities in Washington. Vice Chancellor Sigmar Gabriel warned that some of Trump's rhetoric was troublingly reminiscent of the 1920s. Chancellor Angela Merkel appeared uninterested in the pomp and circumstance in Washington, DC, on Friday. The German leader opted to take in the Monets at a new museum opening in Potsdam just outside Berlin rather than watch the inauguration of President Donald Trump.

With the characteristic aloofness with which she has approached Trump since his election victory, Merkel made no statement regarding the day's events. Instead, her spokesman Steffen Seibert said merely that her team would "study with interest" the president's inaugural address. Merkel, a center-right Christian Democrat (CDU), has already vowed to approach the Trump presidency with an open mind.

She has also previously eschewed his criticism of her leadership and the direction of the European Union, reminding the president that Europe's "fate is in our own hands." 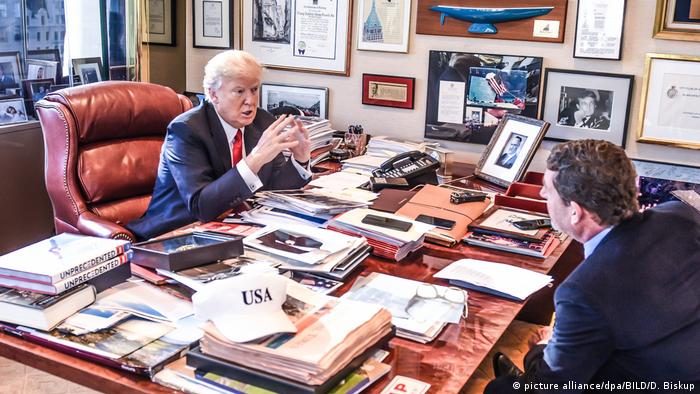 Trump speech akin to 'political rhetoric of the 1920s'

Other German politicians were less dispassionate about President Trump's first day in office. Vice Chancellor Sigmar Gabriel of the center-left Social Democrats (SPD) expressed his profound concern about the tone of Trump's first speech as president.

"From this day forward, it's going to be only America first, America first," Trump said, something Gabriel found deeply troubling.

Gabriel warned that the "highly nationalistic" tone of the president's address was vaguely reminiscent of the "the political rhetoric of the conservatives and reactionaries of the 1920s. … He's really serious about it, and I think we should prepare ourselves."

The vice chancellor blamed "bad radicalization" for Trump's victory. His SPD colleague Katarina Barley took the opportunity to slam the president for his undignified behavior, such as criticizing actress Meryl Streep when she blasted Trump for mocking a disabled reporter.

"That is not the standard of a US president," she said.

Out on the streets, Germans made it clear that they stood in solidarity with the thousands of protesters who had gathered in Washington to show their opposition to Trump taking power. Hundreds of demonstrators marched from the offices of the nationalist, anti-immigration Alternative for Germany (AfD) party to the Brandenburg Gate in central Berlin, carrying signs bearing slogans such as "White nationalism is so 1933."

Across Germany, solidarity marches were planned for Saturday to coincide with the Women's March on Washington. Numerous cities such as Berlin, Frankfurt, Hamburg, Düsseldorf and Munich were set to host similar events.

According to the event's official website, it was organized in response to how  "the rhetoric of the past election cycle has insulted, demonized, and threatened many of us - immigrants of all statuses, Muslims and those of diverse religious faiths, people who identify as LGBTQIA, Native people, Black and Brown people, people with disabilities, survivors of sexual assault."

Organizers have said they expect 200,000 people to participate in the march in the US capital.

Donald Trump has been sworn in as US president. His first moves as leader showcased a policy of protectionism and patriotism. (21.01.2017)