Whether protesting or showing support, people attending Donald Trump's inauguration were driven by the unique nature of his rise to the presidency. DW's Dave Raish reports from Washington, DC. 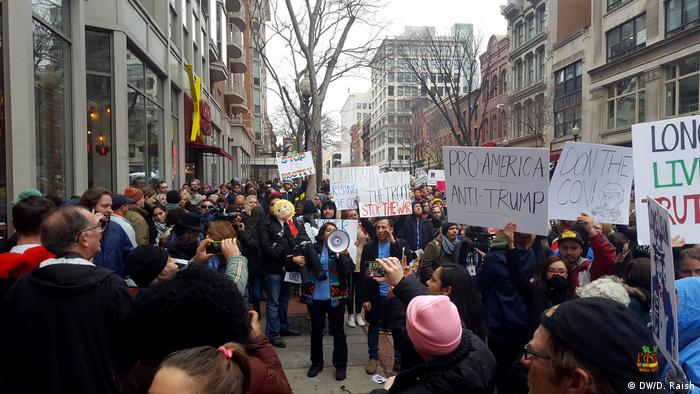 Donald Trump's abrasive campaign style and divisive rhetoric has driven people to either support or oppose him with intensity, and that was evident in the streets of Washington, DC, on Friday.

Most local media used the word "unusual" to describe the inauguration festivities in the US capital - a label that applies to much of Trump's presidential campaign.

Turnout, while passionate, appeared to be much lower than that at predecessor Barack Obama's 2009 swearing-in. Many thousands of people, however, took to the streets to protest a president they viewed as unfit for office.

The demonstrations grew more turbulent as the day wore on, but the morning began relatively quietly, with many of the protesters chanting anti-Trump slogans and singing songs as they gathered along the parade route. 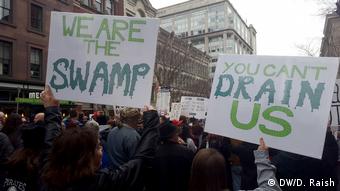 The goal of most protesters was to send 'a simple message'

The most notable of the morning's protests was organized by the anti-war ANSWER Coalition, just near Pennsylvania Avenue.

Sperling, an ANSWER member from Virginia, said the group wanted to let Trump and his supporters know his detractors will continue to challenge him and his positions.

"Ultimately, we're not dumb," she told DW. "We know that he is still going to be president at the end of the day; we just want it to be known that his resistance is out there and it's strong."

Mary Alice, who lives in Washington, said there may be protesters who were not entirely peaceful, but the basic anti-Trump sentiment most demonstrators wanted to express would shine through.

"I think that with this many people, the message is going to get out no matter what," she told DW. "There are going to be people who have specific agendas that are maybe counter to many people's agendas, but I think the bottom line is that this is a travesty, and that's a simple message."

Many protesters held up signs citing the superior vote total garnered by Trump's campaign rival, Hillary Clinton. While the new president captured the necessary Electoral College victory to win the election, Clinton prevailed in the overall tally by some 3 million votes.

"This is in some ways more powerful than our vote," Alice said. "Being here and making sure that [Trump] doesn't forget that most people voted against him is really, really important to me."

Turning out for a unique president

But while thousands of people flocked to Washington to protest against Trump, his supporters also made their voices heard.

For many Trump fans, it was their first time ever attending an inauguration. They felt compelled to turn out for this president in particular, who they view as representative of regular Americans instead of an insider politician beholden to corporate and other special interests.

Pennsylvania resident Annette Mountain, who came to Washington to take part in the "Bikers for Trump" rally, told DW she had "never been interested" in witnessing the transfer of presidential power before.

"This one is different," she said. "We have got somebody in there that is actually for the people."

James Bergdahl and Jacob Burleson traveled from Fort Wayne, Indiana, not just to show support for Trump but also for Vice President Mike Pence, a former governor of their state.

"It's a chance of a lifetime to just come out here and be part of history," Bergdahl said. "[Trump's election] is something that was not regular politics."

"It's kind of a wild thing to be able to be out here and see all this," he added, calling Trump taking the oath of office a "surreal" experience.

'Proof in the pudding'

After listening to Trump's inaugural address, which was characterized by its campaign-like tone, many people lining Pennsylvania Avenue said it was time for the president to deliver on his promises.

Burleson called Trump's speech "powerful," but said that the "proof was in the pudding." 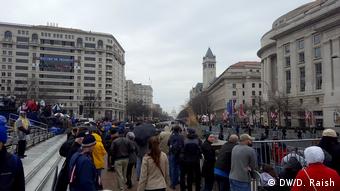 "You have to step up to the plate and do what you are talking about," he said. "It's a step in the right direction for this country to get away from the old. Hopefully the new regime is going to do the right thing. That's all we can pray for."

Mike Power, a college student from New York, told DW that all the work done by Trump's campaign and his political movement "comes down to today and the next four years."

"As long as he sticks to what he says he is going to do - this idea of 'Making America Great Again' and putting America first - I think we will be pretty set for a little while," he said.

Bergdahl put Trump's coming presidency in terms many of his detractors have had to begrudgingly, though not without protest, come to terms with.

"Love him or hate him, he won fair and square," he said. "Give him a chance to either do good, or screw up."

What now Mr. President? Berlin US expats on Trump

We talk to US expats in Berlin about their current feelings about their homeland and their views on the upcoming Trump presidency. (20.01.2017)

US President Donald Trump tells people it is their moment

Former US President Donald Trump says FBI agents have raided his Mar-a-Lago estate in Florida. The search is reportedly linked to an investigation into the removal of documents from the White House. Trump's supporters gathered to protest the raid.