In unusual inauguration speech, President Donald Trump plays to his base

In his first speech as president, Donald Trump flouted convention by remaining largely in campaign mode. While this may please his followers, experts note it may worry his opponents - and America’s allies. 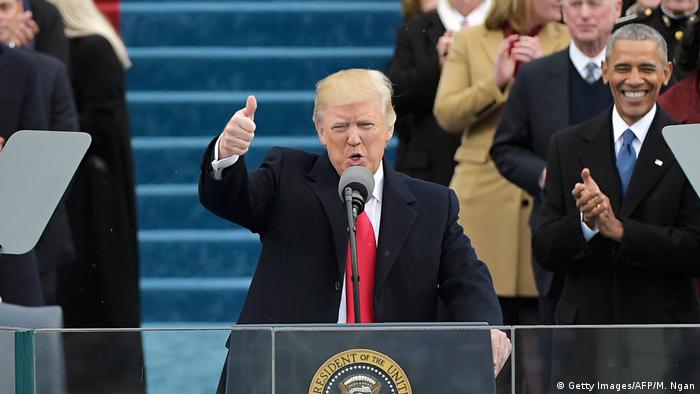 What his supporters hoped for and his detractors feared became reality after Donald Trump was sworn in as the 45th President of the United States. Judging by the highly anticipated inaugural address he delivered, President Trump is not all that much different than presidential candidate Trump or President-elect Trump.

"This was a speech to true believers,” said John Murphy, who specializes in the rhetoric of the US presidency at the University of Illinois. "It resembled a campaign speech more than most inaugural addresses do.”

"The speech should put to end any doubts about witnessing a new version of President Trump, as he's unlikely to make any fundamental changes at this late date”, concurred Aaron Kall, the director of debate at the University of Michigan. Kall is also the editor of the newly-released book "I Do Solemnly Swear: Presidential Inaugural Addresses of the Last Forty Years".

"There was a combativeness to this that will be very attractive to some people and very alarming to others”, said Mary Stuckey, a presidential rhetoric scholar at Georgia State University.

Trump framed his speech explicitly around his two campaign slogans "Make America Great Again” and "America First.” In doing so, he not only went against the tradition of inaugurals, he also made it very difficult - if not impossible - to achieve the goal set for the speech by his own team: to unify the country.

"I cannot recall another inaugural that used the campaign slogan as the close of its speech”, said Murphy. "That reminds everybody of the election and works to reinforce the divisions of the elections.”

But his campaign slogans aside, while Trump mentioned unity in his address, the speech generally lacked a unifying spirit, said the experts.

"Trump talked about a unified country, but extended no explicit olive branches to the 54 percent of the American public that didn't vote for him in November”, said Kall. "A line from the speech thanked Obama for his help during the transition process, but a nod to Clinton as a formidable general election opponent was noticeably absent.”

"There wasn't a lot of ‘I look forward to working with the opposition' and that ‘we are all fundamentally Americans', said Stuckey. "There wasn't that kind of rather typical gesture in his speech.”

The best stab towards the goal of unity in his speech was probably this sentence, said the scholars:

"We share one heart, one home, and one glorious destiny.”

But that appeal was overridden by appeals to Trump's base whom he promised will never be ignored again. What's more, Murphy noted that when Trump talked about the American people he used the second person "you” a lot.

The presidential scholar points out that when the newly-inaugurated president said ‘you by the tens of millions become part of an historic movement,' people that didn't vote for him were thus excluded.

The experts also agreed that Trump's speech was uncharacteristically dark in places for an inauguration that usually celebrates America. This was particularly so when Trump talked about the "carnage” wreaked by gangs and crime.

"That stuff about American carnage does not normally show up in an inaugural, that really bleak sort of post-apocalyptic version of the United States which he used consistently throughout the campaign”, said Stuckey.

"This was oddly dark for a time in which the unemployment rate is under five percent and the stock market has been booming and things are generally going pretty well”, said Murphy.

But it is not just Americans who opposed Trump who may have been startled by Trump's combative tone. America's international allies may be concerned at what consequences "America First” could have in store for them.

"This was the most isolationist and nationalist inaugural we have heard since the 1920s”, said Murphy. "Putting that into his inaugural was disruptive and confrontational.”

"America has always prided itself on being a nation with strong allies and strong international ties. The America First claim is perhaps worrying to some of our allies.”