Some NATO leaders smirk, others support Trump′s tough NATO message | Europe | News and current affairs from around the continent | DW | 26.05.2017

Critics saw the US president's NATO debut as the latest in a series of political missteps. But for his supporters, Donald Trump delivered a slam dunk by pushing his views - and himself - into the spotlight. 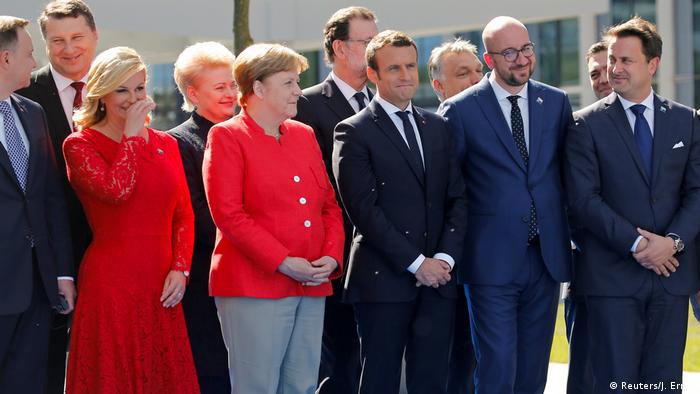 NATO is calling its long-awaited, highly choreographed leaders' summit a "success."  For many observers both inside and outside the alliance headquarters, the bar was set merely at preventing explosions. And not just in the sense of a security threat at the new NATO HQ but also as far as tempers around the table during a working dinner Thursday evening.

US President Donald Trump's first visit to NATO played out in what many are describing simply as the Donald Trump way. While European governments may have been hoping to hear him recommit the United States to collective defense - standing next to the "9/11 and Article V" memorial was a heavy hint - few were surprised he didn't.

While German Chancellor Angela Merkel contributed her piece to the ceremony, a fragment of the Berlin Wall and a few minutes of emotional reminiscence, Trump talked mostly of money.  The extra money, he said, 23 of 28 members needed to start paying to meet NATO's defense spending target.

Some commentators were furious, including Ivo Daalder, one of Barack Obama's ambassadors to NATO. Daalder unleashed a Twitter tirade against Trump, saying the president's decision not to specifically mention Article 5, which commits members to collective defense, was a "major blow to the alliance" that left NATO more divided than ever.

One of Daalder's former colleagues, Slovakia's ex-ambassador Tomas Valasek, said he doesn't share the sense of outrage, adding that no one aware of Trump's personality should have expected a speech like those given by his predecessors.

"Trump was never going to do anything other than be Trump," Valasek said. "It was always going to be the case that whatever he said would jar."

Valasek said that perhaps the 9/11 memorial dedication wasn't the most appropriate place for Trump to deliver his "utterly predictable" monologue.

But because Trump chose not to address the press following the tightly scheduled NATO meeting, this was his only opportunity to speak to the folks back home.

Read more: Opinion: The bull in a china shop

Daalder's Republican predecessor at NATO, Ambassador Kurt Volker, said Trump's message was "just fine" and should be interpreted as something of a trade-off.

"Trump needed to say in public that allies need to spend more," Volker said. "He needs to be seen saying that domestically in order to justify full support for NATO."

"I liked the gaggle of people reacting," Volker said. "I think we need a new generation, and I think they all know that their countries have committed to things and they aren't doing them, So it's kind of sheepish as well... but good to have fresh faces."

Estonian NATO Ambassador Lauri Lepik, from one of the countries potentially most in need of an Article V guarantee, wasn't disturbed. That may also be because Estonia is among the five countries already spending the target of spending 2 percent of GDP on defense.

Calling the meeting a "clear demonstration of allied unity," Lepik told DW there were plenty of other important things the meeting did accomplish.

"We agree with President Trump that NATO has reacted to current security challenges and to the challenges in the future adequately," he said. "All allies agreed that the increase in defense spending is a must and all committed to increase it, that Russia remains a threat and needs to be deterred, that more efforts are needed on the counter-terrorism frontand all allies are committed to increase their participation in NATO operations."

He said the alliance is on the "right path."

Not everyone feels that way, especially after revelations that US law enforcement agencies apparently leaked intelligence about the Manchester terror attack, leading Manchester police to temporarily suspend cooperation with US authorities. While that would normally be a bilateral disagreement, British Prime Minister Theresa May announced she'd be bringing it up with Trump on the NATO sidelines.

Intelligence must be handled intelligently

Carnegie Europe analyst Judy Dempsey was on the NATO sidelines herself, shaking her head about this apparent breach of trust, added to previous allegations of Trump mishandling classified information, including  sharing Israeli intelligence with Russia.  Dempsey said she expects such behavior to have a profound impact on the very counter-terrorism agreement that was just finalized during the NATO meeting.

"Since President Trump entered the White House there's been a rather facile view of intelligence," she told DW. "Intelligence culture takes a long time to build up and it's based on trust. It's based on knowing that if you share information that it won't be leaked out. And above all, you inform your allies."

One of the elements of NATO's upgraded counter-terrorism strategy is intensifying intelligence sharing.  Dempsey said that's something allies would resist under the best of circumstances, despite the new NATO deal, and the potential is "probably going to get weaker now because people are very suspicious."

Dempsey added that there will never be an "all for one and one for all" attitude in intelligence sharing because it simply can't be done among 28 countries with such different cultures and traditions.

Does Trump talk too much?

She said the Trump administration must urgently improve its record. "Trump has to internalize what intelligence means," Dempsey said. "It's very delicate. It's about protecting your relationships and your allies and people who are on the ground collecting intelligence."

Especially after the US missteps, she said she believes NATO intel-sharing will not get off the ground anytime soon. "There will be a lot of reflection about this," Dempsey concluded.