After Angela Merkel's words about frayed EU-US ties under Trump, more German politicians have weighed in. First the foreign minister, then Merkel's challenger at upcoming elections, accused him of hurting the West. 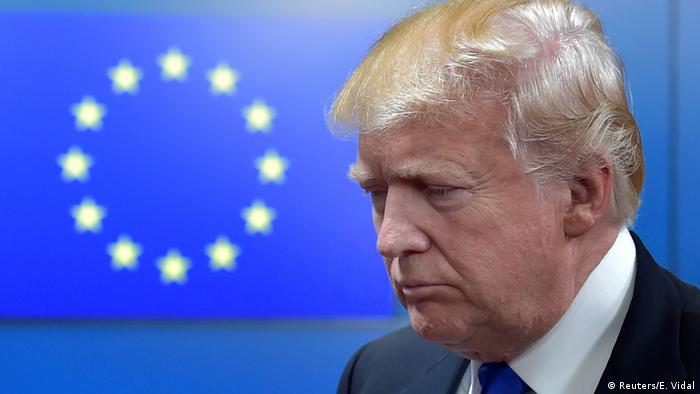 US President Donald Trump has lashed out against Germany once more on Twitter, criticizing its trade surplus and lack of payments to NATO. Things will change, he warned. (30.05.2017)

Analysts say comments about Trump were designed for a domestic German audience and election impact. But Merkel's tough stance has still reverberated abroad. (29.05.2017)

The battle for Trump's mind on climate

More than a thousand companies and investment firms hope US President Trump will stick to the Paris Climate Agreement. The president is said to be "wide open" on the matter. A decision is expected this week. (29.05.2017)

Critics saw the US president's NATO debut as the latest in a series of political missteps. But for his supporters, Donald Trump delivered a slam dunk by pushing his views - and himself - into the spotlight. (26.05.2017)

The German chancellor did not mince words after the G7 fiasco, saying 'the times when we could fully rely on others are somewhat over.' Is the transatlantic relationship over? Dagmar Engel takes a closer look. (29.05.2017)

The leader of Germany's Social Democrats, Martin Schulz, who will confront Chancellor Angela Merkel in September elections, on Tuesday became the latest German politician to join in a war of words with Washington.

Schulz described US President Donald Trump as "a destroyer of all Western values such as we have never before experienced in this form."

Gabriel spoke of the US "dropping out as an important nation."

"That's unfortunately a signal for a change in the world's balance of power," he said.

Gabriel also criticized the Trump administration for selling weapons to Saudi Arabia, its refugee policy, and its lack of commitment to fight climate change. Gabriel, who also serves as Germany's vice chancellor, said that "anyone who accelerates climate change by weakening environmental protection, who sells more weapons in conflict zones and who does not want to politically resolve religious conflicts is putting peace in Europe at risk."

"The short-sighted policies of the American government stand against the interests of the European Union," he said at the refugee conference, adding that the West "became weaker."

Trump wades in again, too

Gabriel's center-left SPD party is a partner to Angela Merkel's CDU in Germany's current ruling coalition, but the two groups are also set for a showdown in general elections in September. The growing rift between Berlin and Washington under Trump marks a sharp contrast in comparison to mostly close relations under former president Barack Obama.

Trump on Tuesday himself made another Twitter contribution to aggravating the divide between the two countries, again accusing Germany of putting the US at a disadvantage with its trade surplus, and failing to make enough payments to NATO.

Americans out, China in?

Specifically, he said Trump "lectured his colleagues and notably shoved a prime minister aside" at a NATO summit. The minister also lamented Trump ''moving away from Western ideas," including international law.

"American colleagues apparently do not realize that, when they leave, there are others who are coming in, for example China, with completely different ideas."

Germany to help others

In response to the crisis, Europe should be "sticking together and growing stronger" and defend the ideas of democracy, liberalism, and openness, he said. Germany should also do more to help countries like France and Italy to reach their economic potential, according to Gabriel.

"Most importantly, we need to stop demeaning or lecturing others," he added.

Angela Merkel arrives in the US for farewell visit as chancellor 14.07.2021

The last official US visit of outgoing German Chancellor Angela Merkel comes as US-German relations seem on the up. But her meeting with President Joe Biden will still cover some tricky topics.

Germany's new government will face several domestic and international challenges in the new year. Still, a sense of optimism prevails.

German Chancellor Angela Merkel is set to visit US President Joe Biden on July 15. The two leaders are keen to bolster ties between their countries. But there are also points of contention.