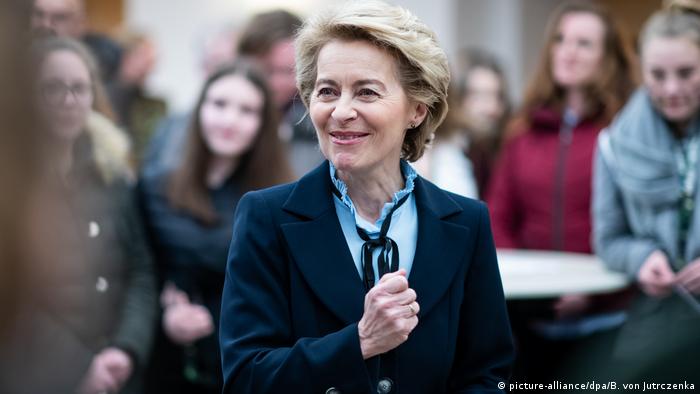 Ursula von der Leyen spent the first 13 years of her life in Brussels as the daughter of a high-level official at the European Union's predecessor institutions.

Those formative years helped von der Leyen become fluent in English and French, in addition to her native German, and gave her confidence on the international stage. These were the characteristics the EU's 28 heads of state cited when they nominated her to become president of the European Commission earlier this month.

But before von der Leyen becomes the first woman to occupy the EU's top job, she must be confirmed by a European Parliament fixated on her political missteps and frustrated with the process by which she was nominated.

Von der Leyen's meteoric rise in German domestic politics has led to a varied and at times controversial career.

German Chancellor Angela Merkel initially tapped the mother of seven and trained physician to head Germany's Ministry of Family Affairs in 2005. Her unconventional style shook up Berlin's political establishment as she worked to push through a parental assistance program and oversaw a nationwide expansion of childcare services with substantial government financial support.

In 2009, von der Leyen became Germany's minister of labor and social affairs in Merkel's second Cabinet. Four years later, she was named Germany's first female defense minister, a post she retained even after shaky coalition building in the wake of the 2017 elections. Few of her 17 predecessors managed to hold on to the defense portfolio for so long. On Monday, von der Leyen said she would step down as defense minister, regardless of whether she is elected European Commission president.

For the most part, she has remained loyal to Merkel, who counts on her as a pillar of support both within the Cabinet and in wider policy discussions among the conservative Christian Democrats (CDU).

After a career devoid of major controversy, von der Leyen's reputation took a hit while at the Ministry of Defense, long considered a graveyard for promising German politicians.

Germany's military, the Bundeswehr, is known for its outdated and defective equipment, ill-conceived arms projects and severe shortage of experts. Von der Leyen managed to use her public platform and political savvy to secure an increase in German defense spending — albeit one still well below NATO spending targets — and bolster German troops for the first time since the end of the Cold War. As a result, defense policy became a recognizable element of German foreign affairs during her tenure.

But scandals also plagued von der Leyen at the Defense Ministry. When right-wing extremist activities and hazing of new recruits in the Bundeswehr came to light, von der Leyen controversially distanced herself from troops by claiming they suffered from an "attitude problem." 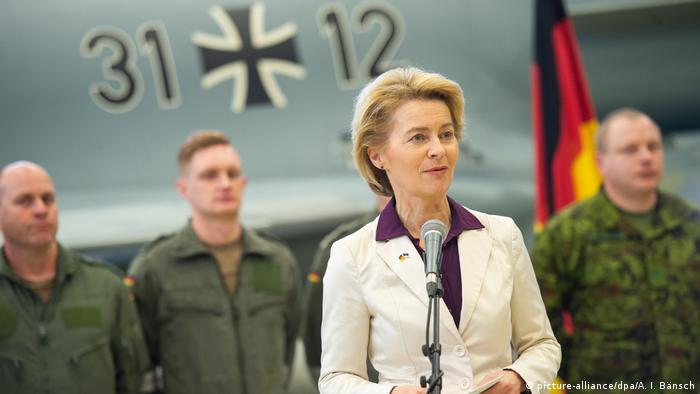 Meanwhile, many arms projects and modernization efforts have been severely delayed or gone way over budget, and evidence has surfaced that von der Leyen ordered a deputy minister to hire an army of pricey external consultants. A committee at Germany's parliament, the Bundestag, is currently investigating the case, with von der Leyen set to testify on the matter in a few months' time.

To many of von der Leyen's critics, her time at the Defense Ministry shouldn't boost her bid to succeed Jean-Claude Juncker as European Commission President. "The situation with respect to the equipment of the German armed forces is not a necessary qualification for the top EU executive job," Omid Nouripour, defense expert for Germany's environmentalist Greens, said at the time of her nomination.

Von der Leyen's critics also contest the way in which she was nominated. She didn't stand for election as a the lead candidate of a party, in the same way as the European conservatives' Manfred Weber, or the social-democrats' Frans Timmermans. Her nomination is widely seen as the result of a backroom compromise to quash disagreement between EU heads of state.

Read more: In the end, it was a backroom deal

As such, a motley coalition of Green, euroskeptic and left-wing MEPs have refused to vote for her on principle. Even European representatives from Germany's center-left Social Democrats (SPD) have threatened to tank her confirmation, despite being in a coalition government with Chancellor Merkel's CDU in Berlin.

"Support the call to reject the Council proposal for the Presidency of the Commission in the name of democracy and transparency in the EU," Tiemo Wölken, an MEP and member of Germany's SPD, tweeted Monday. "No to behind-closed-door deals!"

Despite the pushback, observers maintain that the prospects of von der Leyen securing the European Commission presidency are fairly good. She is still expected to have the support of center-right and liberal MEPs, as well as about half of the social democrats.

She has even managed to win over some of her critics. "That she would be a good Commission president is unquestionable," former SPD leader Sigmar Gabriel told newspaper Bild am Sonntag.

He and others still criticize the "backroom" perception of her nomination. But von der Leyen's reputation as a "highly competent, intelligent and worldly politician" should outweigh any potentially destabilizing hurt feelings about the nomination, Germany's former interior minister, Otto Schily (SPD), told newspaper Welt am Sonntag.

Von der Leyen requires a simple majority among the European Parliament's 747 members on Tuesday to clinch the European Commission presidency. If she succeeds, it would take Merkel's trusted confidant back to Brussels in a full-circle political career.

Ursula von der Leyen has tried to sway socialists and liberals on a possible Brexit delay. She also confirmed she'll step down as German defense minister, regardless of whether she is successful in her EC presidency bid. (15.07.2019)

What are the top EU jobs and who decides on them?

EU leaders are struggling to agree on who should be the new EU Commission President. And there are also several other prominent positions to fill. Here's the who's who of the EU. (21.06.2019)