German conservative politician Manfred Weber will not be the next president of the European Commission, according to a German newspaper. EU leaders have been wrangling for weeks over who should get the top job. 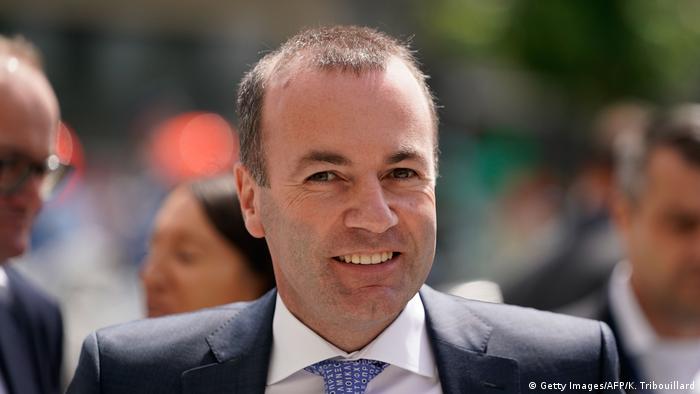 EU leaders meeting at the G20 summit in Japan agreed Friday that Manfred Weber would not lead the European Commission, according to Germany's Welt am Sonntag newspaper.

The bloc's member states are hoping to decide on a candidate to replace Jean-Claude Juncker as commission head before the first session of the new European Parliament begins on July 2.

Weber had seemed the most likely choice, given that he is the leading candidate of the biggest group in the Parliament — the center-right European People's Party (EPP). But the conservative from Germany has failed to attract enough support from other parties.

At the Osaka summit, Merkel merely said that  a solution should be found "on the basis of the prime candidates" agreed on in the bloc.

The plan to take Weber off the table marks a breakthrough following weeks of deadlock among EU leaders over who should take the European Commission's reins.

Weber had argued he had the strongest claim to the presidency given that his EPP won the largest share of votes in last month's European elections. But critics, including French President Emmanuel Macron, Spanish Prime Minister Pedro Sanchez and others, said he lacked experience.

EU leaders are due to hold a summit on Sunday to try and decide whether the leadership role should go to Commission Vice President Frans Timmermans, a Social Democrat from the Netherlands, or another candidate from the EPP.

Candidates can only be approved if they have the support of at least 21 of the 28 EU leaders, as well as backing from a majority in the new 751-seat European Parliament.

The Commission is a powerful body responsible for monitoring member states' budgets and proposing policies on a range of issues, including climate change, immigration, tech regulation and trade.

Whoever takes over as president will lead the bloc for the next five years as it grapples with Brexit, weak economic growth, the rise of euroskeptic sentiment and other major challenges.

Ahead of a summit to discuss EU election results, the French and German leaders have disagreed over how to choose the next European Commission president. Emmanuel Macron has said the process should not be automatic. (28.05.2019)