Macron would back Angela Merkel as European Commission president

The German chancellor has repeatedly denied any intention to continue in politics, but talk of her leading the Commission persists. France's president has now given his backing for Angela Merkel to take over in the role. 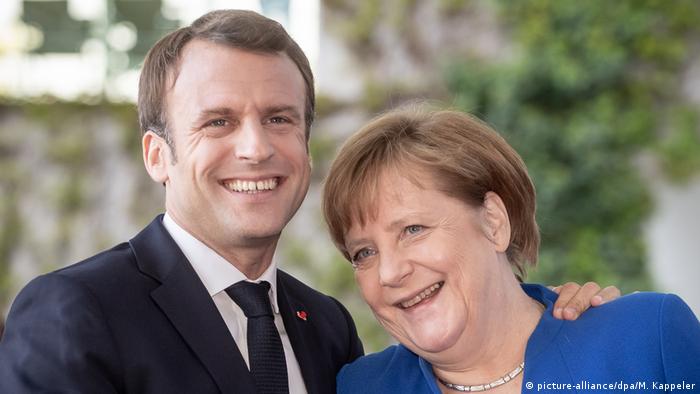 French President Emmanuel Macron said on Tuesday he would support German Chancellor Angela Merkel as the new President of the European Commission.

Macron told Swiss broadcaster RTS on Tuesday that while he could not speak for her, he would support her in any bid to become president of the executive branch of the European Union.

Merkel has repeatedly declared her intention to leave politics at the end of her term as German chancellor, but talk of her taking over the top job at the Commission has persisted.

Current President Jean-Claude Juncker's term is coming to an end and speculation over who will take over the reins is mounting.

The leading candidate is Germany's Manfred Weber, head of the biggest bloc in the European Parliament — the European People's Party.

In the French-language RTS interview, Macron repeated his objections to Weber taking over the role, saying he is unknown to voters and that he has not campaigned throughout Europe.

"Europe needs faces, strong personalities, people who have personal credibility and the skills to fill the positions they hold," he said.

Earlier this month, Weber was re-elected as leader of the center-right EPP through a near-unanimous vote.

To replace Juncker, he still needs the backing of at least two more parliamentary groups.

The leadership issue will likely dominate the June 20-21 EU summit.

Ahead of a summit to discuss EU election results, the French and German leaders have disagreed over how to choose the next European Commission president. Emmanuel Macron has said the process should not be automatic. (28.05.2019)