Ahead of a summit to discuss EU election results, the French and German leaders have disagreed over how to choose the next European Commission president. Emmanuel Macron has said the process should not be automatic. 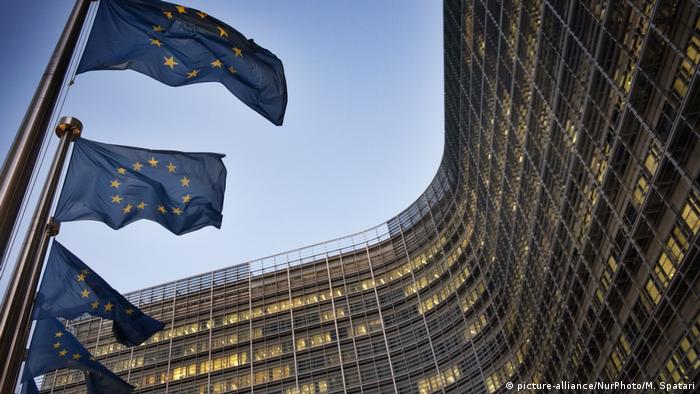 Speaking ahead of a special EU summit, Chancellor Angela Merkel has said Germany still favors choosing the top candidate from the winning party of Sunday's EU elections as the next president of the European Commission.

EU leaders are set to meet in Brussels on Tuesday to discuss the outcome of the blocwide vote and start the nomination process for the heads of the EU institutions.

On Monday evening, Merkel said EU leaders should make the decisions quickly. "We want to find a solution as soon as possible given that the European Parliament will convene at the start of June and it is naturally desirable if by that time we have a proposal from the European Council," she told a news conference.

The chancellor said her conservative CDU/CSU alliance and the coalition's SPD junior partners still backed the "Spitzenkandidat" process, whereby the candidate that was selected by the winning party ahead of the European elections is put forward to the EU Parliament vote as the next European Commission president.

Though it suffered significant losses on Sunday, the conservative European People's Party (EPP) and its leading candidate, Manfred Weber of Germany, still came out on top.

French President Emmanuel Macron also wants to see a speedy agreement on a nominee, "ideally" in June, but he said Monday that the "Spitzenkandidat" system should not be automatic, an official from Macron's office told the Reuters news agency. Macron's centrist En Marche party had repeatedly said it opposed the "Spitzenkandidat" process.

The EPP, which includes Merkel's CDU, groups conservative parties across the EU and has had the largest presence in the European Parliament since 1999. But while the EPP came out of the elections as the strongest party, it lost 36 seats, giving it 180 in the new legislature. The center-left Socialists & Democrats (S&D) lost 39 seats, to reduce their total to 146.

As a result, the two parties will no longer enjoy their traditional majority in the 751-seat parliament, meaning they will need to involve at least one other parliamentary group in order to agree on appointments.

Sunday's results have also strengthened Macron's influence via his En Marche party, created in 2016 and expected to have 23 seats in the European Parliament for the first time. It will likely be the largest party in the Alliance of Liberals and Democrats for Europe (ALDE), the third largest bloc in the parliament, behind the EPP and S&D.

EPP leader Weber, of the CDU's Bavarian sister party the Christian Social Union, spoke with other political groups with the aim of forming a coalition stretched across a broader political spectrum. "The task for democrats is to sit down together," he said Monday.

It may prove to be a difficult task. "In our view, Angela Merkel's favorite candidate is totally disqualified today," said Pascal Canfin, one of the leading candidates from Macron's party, in an interview with Inter radio on Monday. "The future majority of the European Parliament goes through us, without question. There isn't one without us."

In a statement on Tuesday, the leaders of the majority of parties in the newly elected European Parliament called on national leaders to nominate the Spitzenkandidat for the EU executive.

The statement said it was "reconfirming our resolve for the lead candidate process so that the next Commission president has made her/his program and personality known prior to the elections, and engaged in a European-wide campaign."

Besides Weber, others eyeing the Commission presidency are current Vice President Frans Timmermans of the S&D and outgoing EU Competition Commissioner Margrethe Vestager of ALDE.

The EU will also choose new leaders for the EU Council, the parliament, the European Central Bank and a foreign
policy chief.

Opinion: No revolution in the EU

The European Parliament will be more heterogeneous than before, so finding a majority and reaching compromise will be a serious challenge, writes Bernd Riegert. (27.05.2019)

The far-right AfD has emerged as the strongest political party in Germany's formerly communist East. With the Greens winning big among young, urban voters though, the East-West divide looks set to deepen further. (27.05.2019)