Angela Merkel and Emmanuel Macron are at odds over the best candidate to lead the European Commission. The German chancellor backs center-right Manfred Weber, but the French president has other ideas. 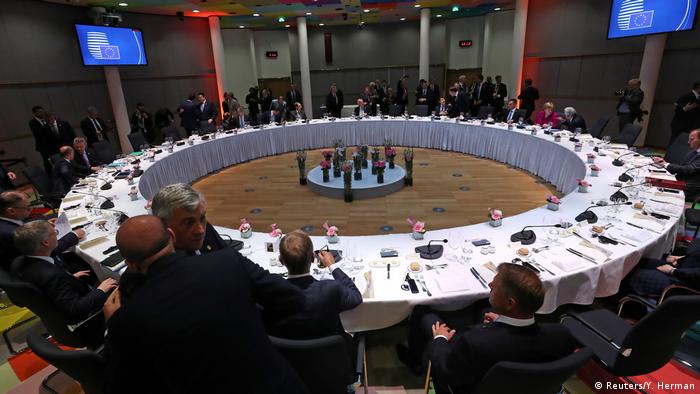 A rift between France and Germany was apparent at an informal summit of EU leaders in Brussels on Tuesday, as French President Emmanuel Macron looked certain to protest the replacement of European Commission President Jean-Claude Juncker with German politician Manfred Weber.

Macron told reporters that he preferred someone who has "experience either in their country or in Europe that allows them to have credibility and savoir faire," an apparent dig at Weber, who has never served in government or an institution as big as the commission.

"The key for me is for the people at the most sensitive positions to share our project and be the most charismatic, creative and competent possible," Macron said, adding that he wants two men and two women to fill the top four EU positions.

"I want to unite. If everyone remains stuck on names as they are, we'll be blocked."

He also said that the bloc needed "renewal" after traditional parties suffered badly in the weekend's EU elections.

German Chancellor Angela Merkel, however, spoke of her continued support for Weber, a member of the Bavarian sister party of her Christian Democrats (CDU), who has led the center-right bloc, the European People's Party (EPP), in the European Parliament since 2014.

"We have responsibility towards our voters, and we will have to wait and see. It's too early to speak about this, everyone needs to show tolerance and a willingness to engage in compromise."

Read more: Opinion: No revolution in the EU

Ahead of the summit, Merkel and Macron had already shown a marked difference of opinion over how Juncker's successor should be chosen. Merkel said she prefers the current system, where the politician presented as the biggest bloc's top candidate before the election should get the job. Macron, however, said there should be more debate about the best candidate before Juncker leaves at the end of October.

Both the EPP and its traditional coalition partner, the center-left Socialists and Democrats (S&D), got battered in the EU vote, as Green parties and populists made gains. The pro-business ALDE group, of which Macron's En Marche will now be a member, also did well.

"We will support Frans," Sanchez said. "He has the experience not only at the national level but also at the European level to lead the commission."

Macron has proposed Denmark's Margrethe Vestager, the current EU commissioner for fair competition, and France's own Michel Barnier, who has led the EU's Brexit negotiations. He has also said that he thinks Timmermans is qualified.

Merkel and Macron will meet again on Thursday in the German city of Aachen.

EU leaders hope to be able to name the candidates for the top posts in the bloc at the next summit on June 20-21.

Across Europe, voters cast aside the old guard in favor of populists and Green parties. Keep up with the latest reactions here as Europe grapples with a heavily fractured parliament. (27.05.2019)