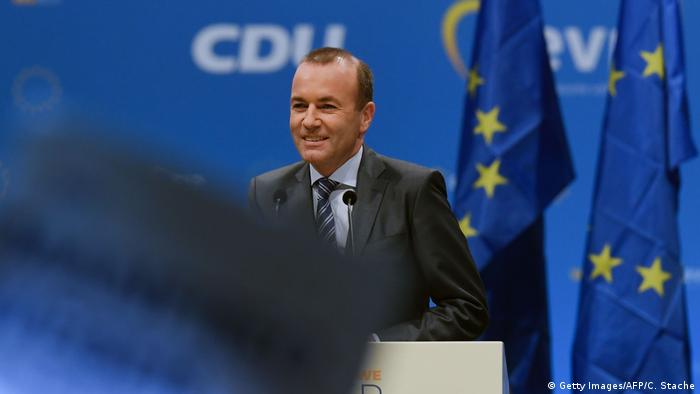 German MEP Manfred Weber has been reelected as leader of the center-right European People's Party (EPP) bloc in the European Parliament.

The EPP said 156 of its 160 European parliamentarians meeting in Brussels Wednesday had returned Weber as leader of their group.

Four ballot papers were spoiled, said a EPP spokesman. The bloc is the largest in the European assembly with 179 seats despite losing 40 mandates following last month's European election.

Weber is also seeking to replace Jean-Claude Juncker as president of the European Commission. He currently needs the support of at least two further parliamentary groups to muster the 376 votes required in the 751-seat Parliament.

The conservatives together with the center-left S&D bloc, the liberal ALDE and the Greens could muster 504 seats.

But, the S&D has already tapped as its nominee Dutch social democrat Franz Timmermans, one of the bloc's Brexit negotiators, who last month faced Weber in a televised debate.

And, the liberals could back Margrethe Vestager, who as European commissioner and regulator from Denmark has in the past taken on US internet giants.

A package of four top EU appointments could emerge at a June 20-21 summit if the 28 EU leaders reach a consensus on procedures and nominees, which would also hinge on an EU parliamentary majority.

French President Emmanuel Macron, who has so far refused to back Weber, was visited on Monday by Annegret Kramp-Karrenbauer, the successor to Chancellor Angela Merkel as chair of Germany's Christian Democrats.

Kramp-Karrenbauer has publicly backed Weber's call for EU activities to be solely focused in Brussels instead of commuting to-and-fro to Strasbourg, the French city on the Rhine river near the border with Germany.

Far-right parties looking to use seat gains in the new European Parliament to forge a combined Eurosceptic bloc were dealt a double blow on Wednesday.

Reuters reported that both Poland's nationalist and Britain Brexit Party had both said they would not join such a grouping.

"This is something that we cannot accept under any circumstances," Kaczynski told Polish private Radio Wnet.