Poland: More aligned to US than to European partners? | Europe | News and current affairs from around the continent | DW | 30.08.2019

Donald Trump will not be taking part in commemorations to mark the 80th anniversary of the start of World War II. But Warsaw hopes visiting US envoys will still want to talk about strengthening NATO's eastern flank. 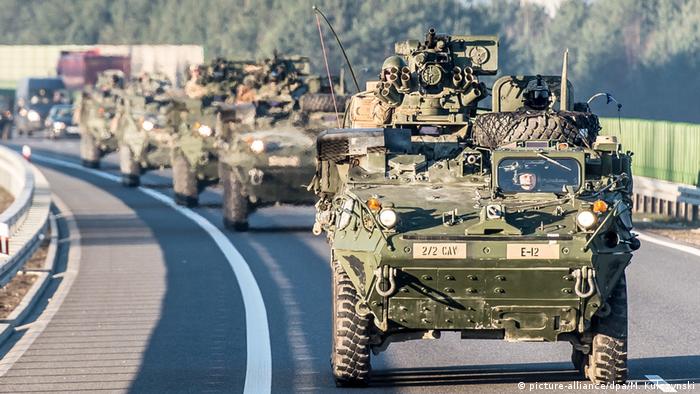 For weeks, Poland's ruling right-wing Law and Justice party, or PIS, had virtually been bursting with pride: US President Donald Trump was expected to stand side by side with Poland's leaders to mark the 80th anniversary of Adolf Hitler's attack on September 1, 1939.

But after canceling his trip to Denmark once politicians there mocked his desire to purchase Greenland, Trump has now also scrapped his visit to Poland, citing the threat of Hurricane Dorian, which is headed straight for the state of Florida. In his place, Vice President Mike Pence will travel to Warsaw to commemorate Polish victims on Sunday, along with a number of other high-ranking politicians including German Chancellor Angela Merkel and German President Frank-Walter Steinmeier.

Trump's cancellation is a setback for PiS. "Trump's presence would have been very important for us with respect to the presentation of Polish history," said Wojciech Kolarski, an aide to President Andrzej Duda. Kolarski pointed out that international media, which would have devoted ample coverage to Trump's visit to Warsaw, would have helped to shine a light on Poland's troubled history as the first victim of World War II.

Despite Trump's absence, however, the guest list remains unchanged, highlighting the fact that the PiS government believes its political allies are exclusively in the West. Underlining this belief: Russian representatives weren't even invited to Sunday's commemoration.

But even among the country's Western allies, there are clear differences when it comes to bilateral relationships. Whereas German-Polish relations are strained due to Polish claims to compensation for the losses of World War II, Warsaw and Washington are on the same page in many respects: how both countries are dealing with migrants, for example, or their shared criticism of Germany's support for the Russian-backed NordStream 2 gas pipeline in the Baltic Sea.

Warsaw can be certain that the conflict with Brussels over the overhaul of the Polish judicial system will not be a subject of debate with Washington. And, perhaps most of all, Poland's leaders are convinced the country's security is guaranteed by the United States, not by Europe.

"It's only natural that we are looking for partners who can actually exercise their military power, meaning they can fulfill their obligations stipulated by Article 5 of the NATO treaty," Beata Gorka-Winter of the Warsaw-based, publicly funded Polish Institute of International Affairs (PISM), told DW. The political analyst considers the principle of solidarity between all NATO countries enshrined in that article a piece of fiction, "if it's not backed by real military assets."

The US with its military potential, she added, is the only country that could be relied on if Poland was in imminent danger. Poland's European NATO partners, on the other hand, have already demonstrated their inability to act numerous times — with the failure of the idea to set up a European army, for example.

Poland sees its biggest threat to the east: Russia. Since the beginning of the Ukrainian conflict in 2014 Warsaw has invested billions of euros into the modernization of its armed forces, adding a concrete financial dimension to Poland's affection for the US.

Trump has praised Poland for spending 2% of its gross domestic product on defense, thereby qualifying it as one of only a few NATO allies which actually meet the alliance's spending demands. There are plans to increase Poland's defense spending to 2.5% of the country's GDP by 2030.

Poland also uses its funding as a means to coax more US troops into the country. Currently, more than 4,500 US troops are deployed in Poland on rotation as part of NATO forces. After Russia's annexation of Crimea, NATO battalions were also deployed in the three Baltic States, in addition to the US troops in Poland.

But Warsaw would prefer that American troops remain in Poland on a permanent basis, and is prepared to invest up to $2 billion (€1.8 billion) into a permanent US base in the country. President Duda has said the project could be called "Fort Trump."

Read more: Fort Trump: Is a new US military base in Poland a realistic option?

So far, the US president has said he would deploy an additional 1,000 US troops to the country, relocating them from Germany, currently home to some 35,000 US troops.

"Poland meets its 2% of GDP spending obligation towards NATO. Germany does not. We would welcome American troops in Germany to come to Poland," Georgette Mosbacher, the US ambassador to Poland, wrote on Twitter in early August.

But critics of the move have said it would be a violation of the Founding Act on Mutual Relations, Cooperation and Security between NATO and the Russian Federation of 1997, which prohibits permanent deployment of NATO troops in the proximity of Russia's borders. Gorka-Winter, however, believes this kind of reinforcement of NATO's eastern flank is necessary, even if it displeases Russia.

"When dealing with Russia, there's nothing worse than inactivity. We're already seeing airspace and territorial waters of other countries violated by Russia. If we continue to do nothing, this attitude will only increase," she said, adding that inactivity on Poland's part would provoke Russian cyberattacks.

The American approach of paying increased attention to those countries which have troubled relations with Brussels could conceal a strategy which aims to divide the European Union, believes political analyst Piotr Buras. The head of the Warsaw branch of the European Council on Foreign Relations (ECFR) think tank criticized Poland's efforts to "chase the American mirage," which has put European cooperation at risk.

"Under normal circumstances, Poland could help shape Europe. The trouble is that we're looking in a different direction," said Buras, giving the example of the controversial February 2019 Iran conference in Warsaw, which Poland set up on behalf of the US and which was boycotted by a large number of European politicians. As early as 2003, Buras said, Poland created divisions between the European NATO members by supporting the US mission in Iraq.

But despite Trump's absence in Warsaw on Sunday, there will still be a sufficient number of high-ranking politicians in attendance, making sure that the commemorative celebrations will have a strong political dimension as well.

With its American guests, the Warsaw government intends to discuss concrete steps regarding the deployment of additional US troops in Poland. The visit is also intended to give a boost to further contracts regulating US gas supplies to the country. Both, troops and gas supplies are high on Warsaw's priority list, each as a means of strengthening its position vis-à-vis Moscow.