How non-EU actors are lobbying Brussels | Business | Economy and finance news from a German perspective | DW | 12.11.2018

With President Donald Trump shifting the priorities of the US's trade policy, are global players seeking more influence in the European Union? DW analyzed the lobbying efforts of non-EU players in Brussels. 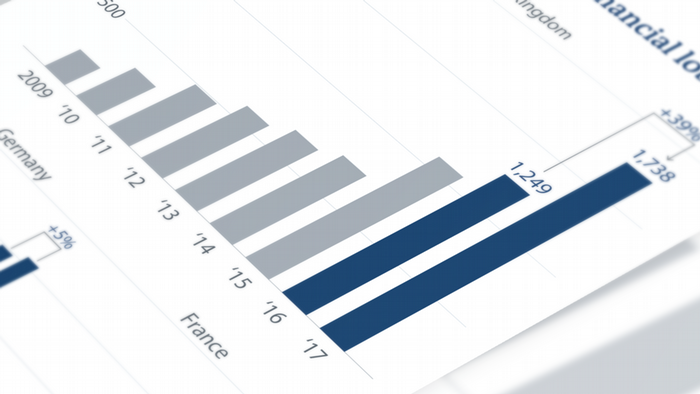 Read this article in Chinese, Greek, Russian, Spanish or Turkish.

Being subjected to the European Union's laws means that EU citizens are also subject to the influence of the entities that lobby the bloc. In an effort to address the growing complaints about the lack of transparency in official decisions — and lobbyists' role in them — in 2008 the EU launched the Transparency Register, an open database in which pressure groups (called "entities" for official purposes) register and declare their finances and interests in order to be granted access to the European Commission.

However, registration is not required by law, and thus it's possible to lobby the EU without registering. Additionally, there is no control mechanism to ensure that entries are accurate or up-to-date. Experts estimate that lobbyists often vastly underreport the amount of money put toward their efforts. Caveats in mind, the Transparency Register remains the main source of information on lobbying in Brussels.

With the United States reorienting its priority goals, global economic relations are shifting. Could that mean more international interest in trade with the EU? DW looked at the non-EU players lobbying Brussels, which sectors they are most active in, and the different approaches that they take to influence decisions that ultimately affect the lives of millions of people, both within and outside of the European Union.

Over €2 billion spent on lobbying EU in 21 months

The Transparency Register requires lobbyists to declare a range of money that they intend to spend on their efforts. To evaluate the extent of lobbying, we calculated the midpoint between each entity's high and low estimates and then grouped lobbyists according to their registered headquarters.

The analysis indicates that over €2 billion ($2.3 billion) was spent to lobby the EU from the beginning of January 2017 through September 2018, most of it by entities located within the European Union. In the same period, €4.7 billion spent to lobby legislators in Washington, according to the Center for Responsive Politics, a US NGO that focuses on transparency. 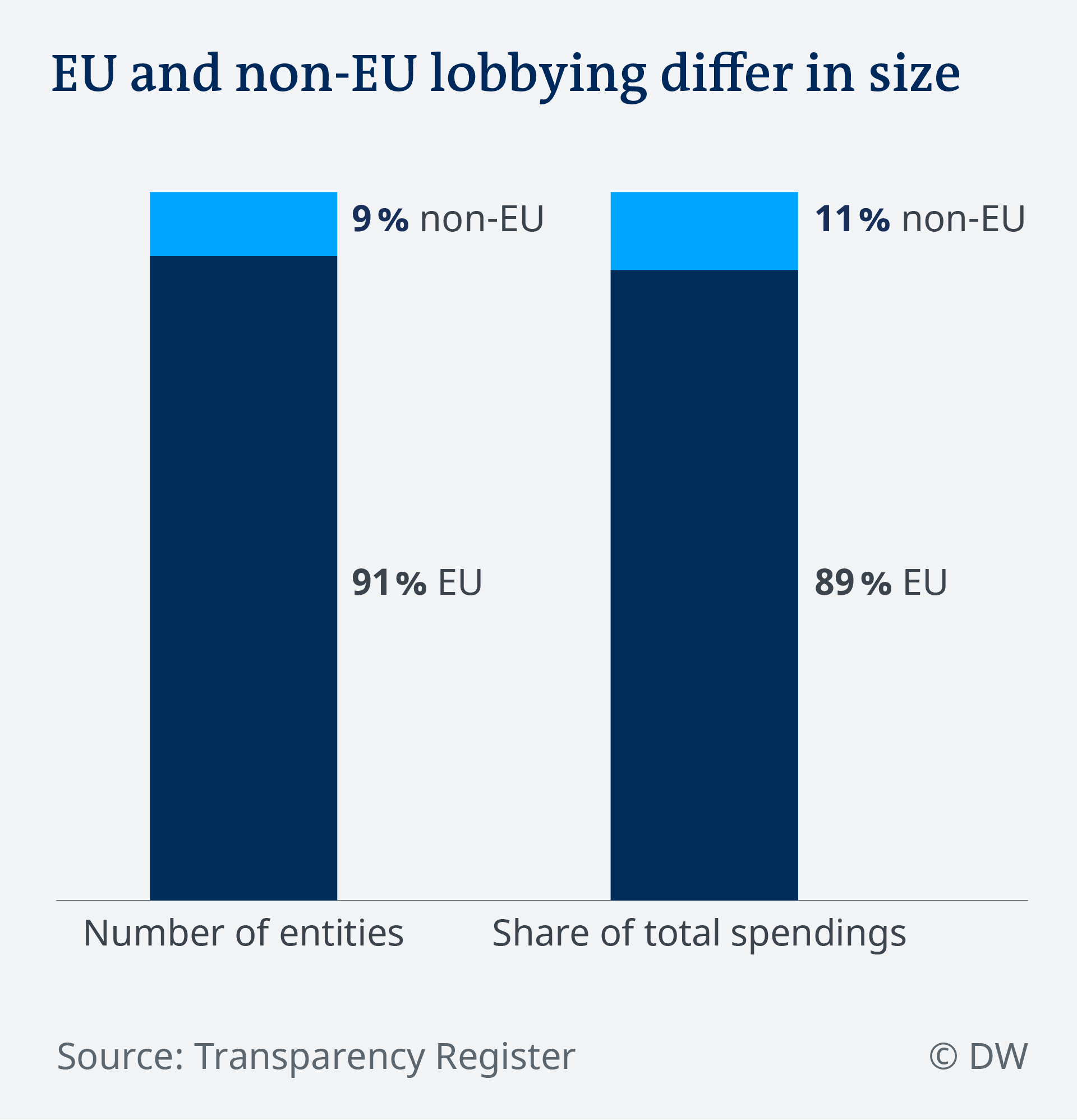 At first glance, the proportion of lobbyists from outside of the European Union does not seem all that great — they make up just 9 percent of the entities in the Transparency Register and account for 11 percent of the overall spending.

The largest share of the non-EU money spent to influence Brussels comes from the United States, with Switzerland ranking second, followed by Norway. Japan and China are, respectively, a distant fourth and fifth, and the Russian Federation, another very important EU trading partner, ranks eighth. 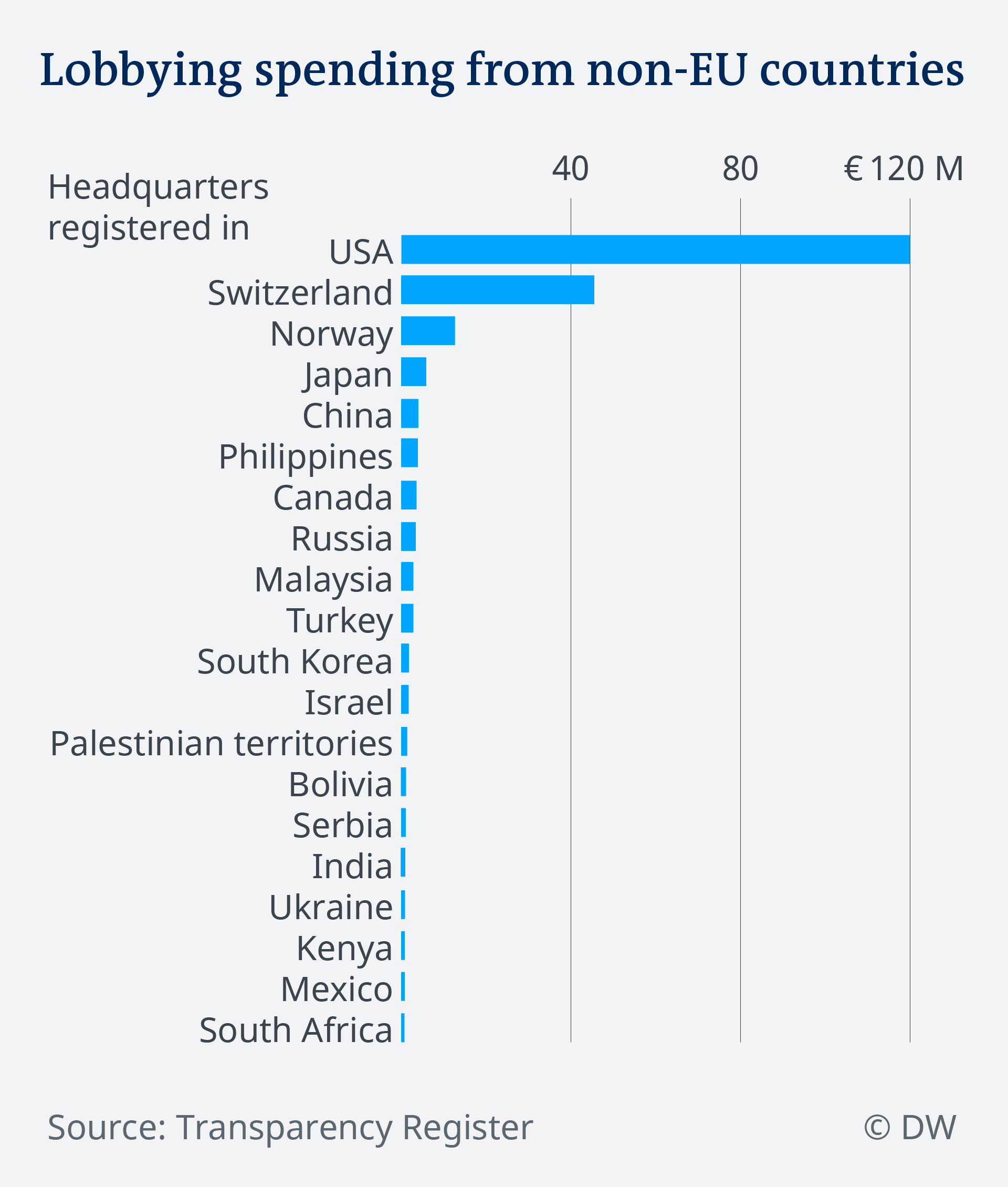 As they are subject to EU legislation, entities in member states naturally have a greater interest in lobbying the European Union: There's just more incentive for German companies, associations and pressure groups to invest money in trying to shift the bloc's priorities than there is for their equivalents in Japan, for example.

Only five non-EU countries rank in the top 30 in terms of money spent to lobby the European Union. 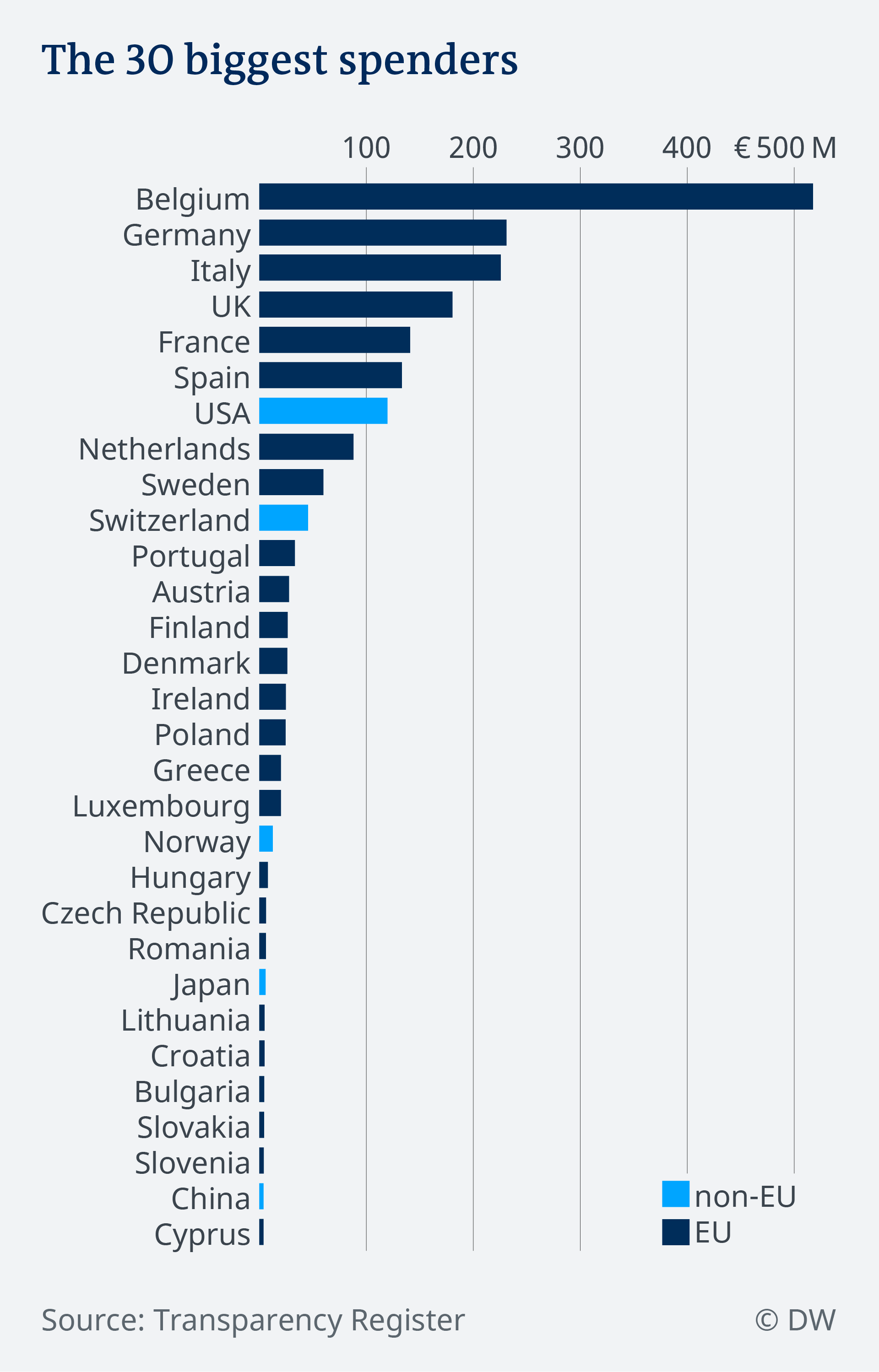 Companies from the United States and Switzerland spent a considerable share of the non-EU money used to lobby the European Union from January 2017 through September 2018, according to this analysis. Norway, at position 19 overall, is the No. 3 non-EU spender.

Belgium, which ranks far ahead of the European Union's biggest economies, seems an unlikely No. 1, but the hundreds of millions of euros declared by lobbyists are not coming from within Belgium. They're coming from Brussels — not the municipality, but the lobbies, consulting firms, associations and legal organizations, some of them among the world's biggest, with offices in the Belgian capital in order to take advantage of the physical proximity to the EU institutions.

DW looked at the 100 biggest Brussels-based entities: who their customers are, where their headquarters are located and how much they paid lobbying companies in Brussels to be represented in 2017.

Companies with non-EU origins account for 43 percent of the total spending by Brussels-based pressure groups. Factoring in spending from Brussels, the United States is now the biggest lobbying force by a wide margin, surpassing Germany, the UK and France. Belgium is the second-biggest, but that is because of the hundreds of pan-EU associations that list it as the location of their headquarters. Japan and Switzerland are also in the top 10, though China remains further behind. 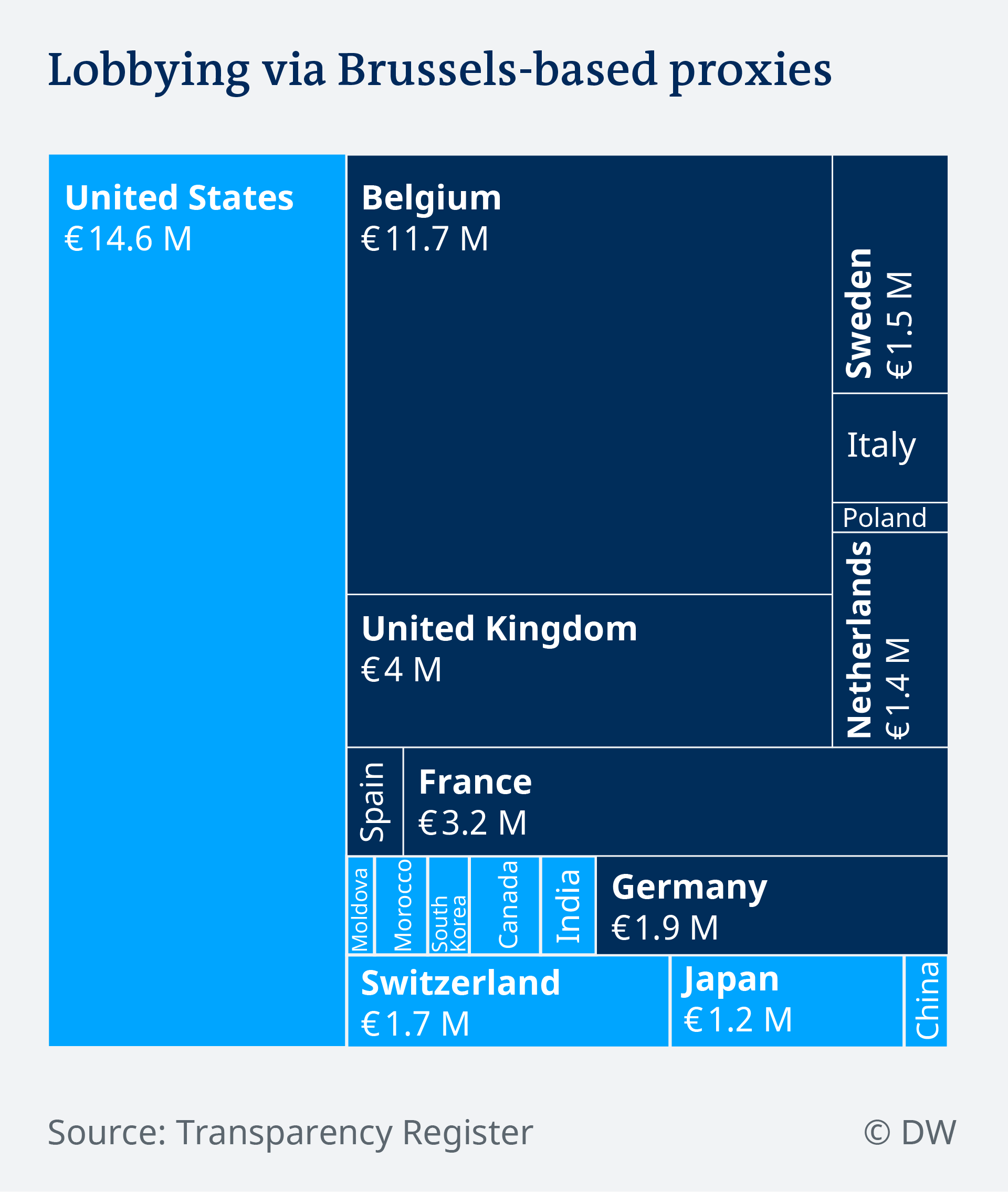 "Generally speaking, in East Asia there exist close relationships between state and enterprises, whether it is in China, Korea or Japan, so that they are deeply interlinked in the policy process, rather than seeing themselves as separate actors," said Duncan Freeman, a research fellow at the EU-China Research Centre of the College of Europe. "In the case of China, the tradition of lobbying does not exist, and Chinese companies do not lobby the government in the same way as is done in the US and Europe. Chinese companies are not familiar with the practice of lobbying when they internationalize, and generally do not see any reason to engage in the practice, and especially to engage outside advisers to do it."

On the other hand, said Raphaël Kergueno, policy officer for the Brussels office of Transparency International, "as members of the European Economic Area, countries like Switzerland, Norway and Iceland have a much higher stake in single-market rules since these are directly implemented in their respective economies. Unlike EU member states, they do not have a seat at the table and don't have the possibility to vote on new legislation. Lobbying by entities from these countries is one way of exerting influence in EU decision-making."

Kergueno noted that the European Union's internet policies on copyright law and the General Data Protection Regulation, which covers individual privacy, can even force companies to change the way they do business in their home countries. "The leadership role taken by the EU on the regulation of online activities, which could set standards in the global economy, can have long lasting effects on business strategies of US-based companies," he said. "Another reason why Asian countries are less represented could also stem from the fact that these countries have a preference for dealing bilaterally at intergovernmental level to represent their interests."

As for the United States in particular, a recent study by Transparency International found that Silicon Valley companies' direct lobbying efforts increased 278 percent from 2014 to 2017, following the implementation of a number of high-profile EU regulations — and a number of disputes between the European Commission and the tech giants of the US.

Lobbying actively fluctuates depending on events and legislation

Just like the GDPR or copyright legislation, major events result in upticks of lobbying for various pressure groups. One prime example is the result of the Brexit vote in the United Kingdom.

"There is a big difference in the intensity of lobbying from one legislative file to another. Brexit, for instance, will make a huge difference to UK corporations, but they are likely to continue intensive lobbying in Brussels after the UK has left the EU," said Olivier Hoedeman, research and campaign coordinator for the Corporate Europe Observatory in Brussels.

One of the biggest questions of Brexit is its effects on the current financial capital of the European Union, the City area of London. The possibility that banking could become less profitable in London has triggered reactions from politicians such as French Prime Minister Edouard Philippe, who last year actively tried to woo financial companies to move jobs to Paris and, of course, Germany's financial hub, Frankfurt, joined the race.

And the lobbying world, too, reacted: In the year that followed the referendum, the efforts of British banking and finance lobbyists increased far more than those of their German or French counterparts. 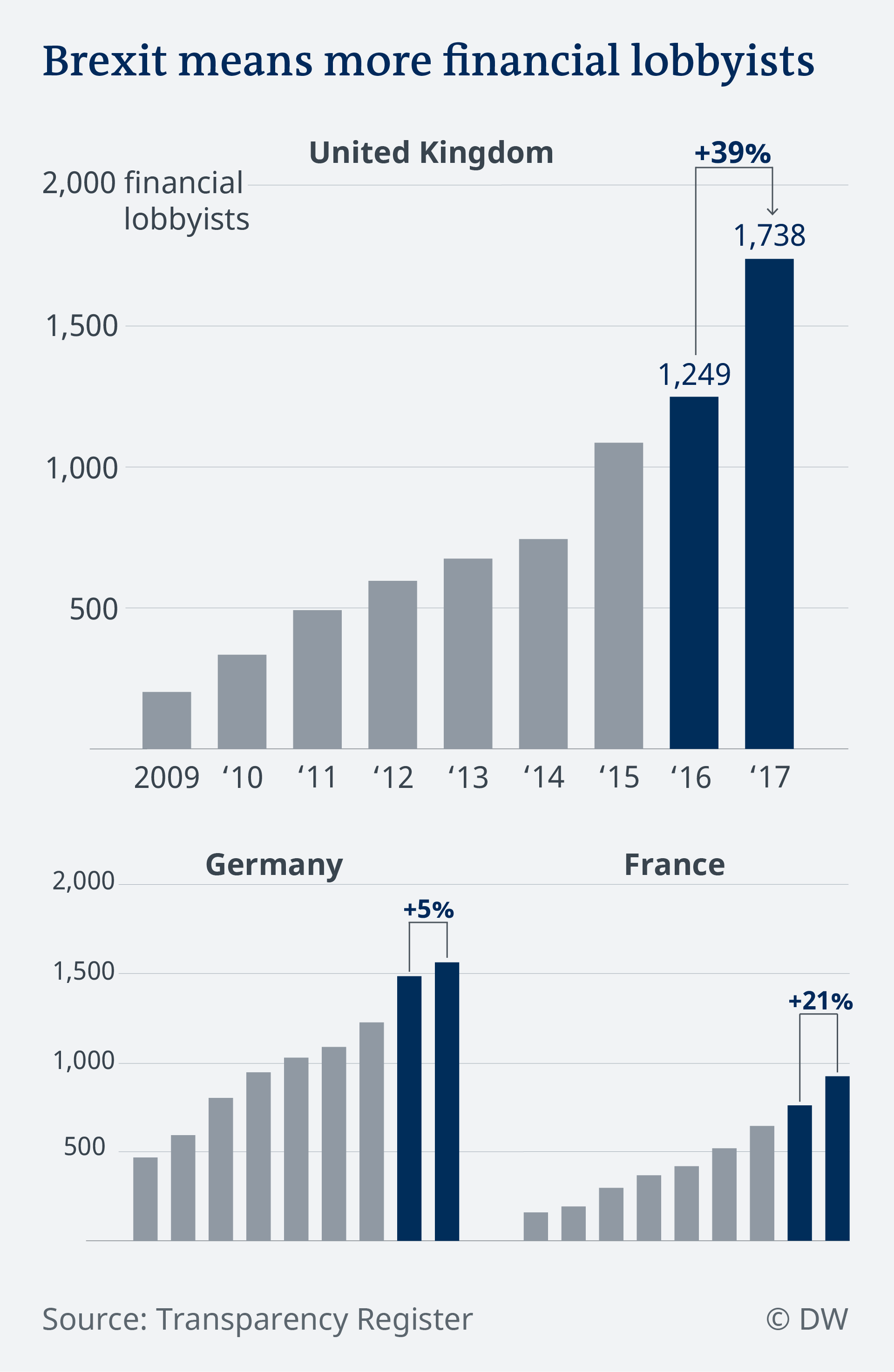 In 2016 and 2017, the UK overtook Germany in terms of the number of people employed in full-time positions for entities that have an interest in finance and banking

Uncertainty and ongoing negotiations attract interest, and, with a final compromise still not at hand, it should not be surprising that a number of interested parties will continue to try to influence decisions.