Fort Trump: Is a new US military base in Poland a realistic option?

US President Donald Trump has said he is "seriously considering" a Polish request that Washington build a new military base in the country. DW spoke with two security experts to determine the viability of such a plan. 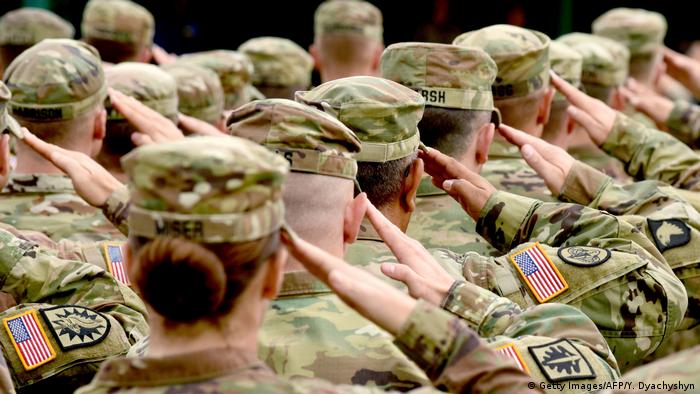 On Tuesday, US President Donald Trump and his Polish counterpart, Andrzej Duda, raised the prospect of building a new US military base in Poland. Duda even suggested it might be named Fort Trump at the joint press conference in Washington, stressing Poland's "very strategic location" and pointing to the need for an expanded US presence to counter Russia's aggressive behavior. Trump voiced openness to the proposal.

Although the name got the attention of the US president and the rest of the world, the idea came as no surprise to security experts. The Polish government has spent months actively lobbying for the project in Washington.

Poland's former foreign minister Radoslaw Sikorski, for instance, told DW's Zhanna Nemtsova: "I worked very hard to bring it about. We want in Poland the kind of allied forces that would deter Russia but not threaten Russia."

At Tuesday's press conference, Trump said the US would "seriously consider" the proposal. But how realistic is the idea and what would be the implications? DW spoke with Heather Conley of the Center for Strategic and International Studies (CSIS) and Jorge Benitez from the Atlantic Council to get their assessments of the situation.

Conley stressed the lengthiness of the US decision-making process. "When President Trump says, 'We are seriously considering it,' it means that Congress has asked the Defense Department to study this proposal. The Defense Department, I think, has some very important questions," she said. "I don't believe US defense officials are that enthusiastic about this. I don't think there is great speed or enthusiasm for this."

Both Conley and Benitez picked up on the bilateral nature of the proposal. "Whatever decisions are reached bilaterally would have to be in close consultation with NATO, and of course the NATO-Russia Founding Act [of 1997] would have to be part of that conversation," said Conley. "But again this is to ensure that there is a greater deterrence and readiness capability on NATO's eastern flank. The US bilateral arrangement with Poland, should it happen, would have to be inside that context."

Read more: NATO views Vostok with both a shrug and a show of force

"The Polish offer would make sense as part of a multinational investment of NATO forces in Central Europe, such as the Alliance's Enhanced Forward Presence battalions in Poland, Estonia, Latvia and Lithuania," said Benitez. "Accepting the Polish offer without doing it through NATO would mean more direct US resources for European defense without any matching investment by other NATO allies. This is counter to Trump's priority to make NATO allies less dependent on US military assistance. Building a US base in Poland would be a step in the opposite direction. It would make the US unilaterally more responsible for security near NATO's borders with Russia."

Benitez said the stationing of US troops in Poland would not, as Moscow warned in May, undermine European security. "Quite the opposite, more US troops in Central Europe will strengthen deterrence and thereby increase stability in the region," he pointed out.

Speaking on Russian objections to the move, Benitez was quite blunt. "The Russians will respond with wild allegations and negative propaganda. But the truth is that the Russians will complain if a group of Girl Scouts visit Poland," he said. "Moscow tries to portray everything as a threat, even though the small number of US troops likely to be moved to Poland will be no threat to the quarter of a million troops Russia has stationed near its border with NATO."

Pulling troops out of Germany?

Asked about the threat that the US might shift troops from Germany amid growing US-German tensions, Conley said the scenario was quite unlikely. "With the world-class and premiere facilities that the US has in Germany and Italy, both the cost and the movement to Poland would not make cost-effective sense. I don't think it has anything to do with current US force posture in Germany," she said.

Conley, however, sees another issue as a potential impediment to realizing the proposal. "The other big question is: Where would those additional forces come from? What would the global footprint be if the US would decide to move additional capabilities farther to NATO's eastern flank? The global picture will be a very big constraint on any further US decision," she said.