US General Ben Hodges: ′Russia only respects strength′ | Germany | News and in-depth reporting from Berlin and beyond | DW | 17.07.2018

In the space of a week, the US president has attacked NATO and cozied up to Vladimir Putin. Retired US Army General Ben Hodges told DW that Trump alienating US allies "worries every military professional" he knows. 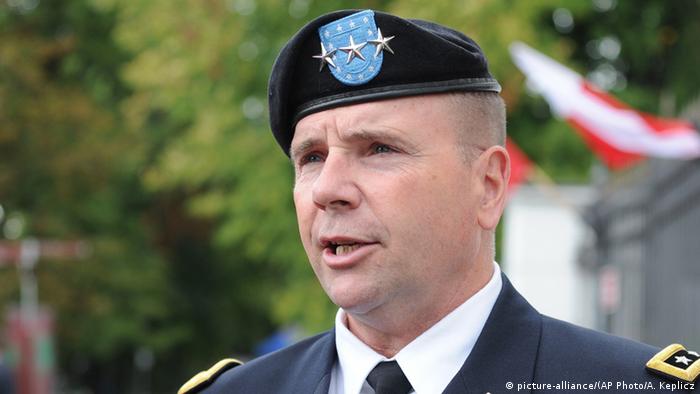 After military experience in Korea, Iraq, and Afghanistan, Lieutenant General Frederick "Ben" Hodges served his last military assignment as commander of the United States Army in Europe, before his retirement in December 2017. Now living in Frankfurt, Germany, he is Pershing Chair of Strategic Studies at the Washington-based Center for European Policy Analysis (CEPA).

DW: What did you make of President Vladimir Putin's meeting with his US counterpart Donald Trump in Helsinki? Do you share what seems to be the common view: That it was a diplomatic disaster that undermines multilateral alliances like NATO?

Hodges: I'm reluctant to say anything is a disaster so immediately after it happened. It's just going to take a little bit of time for things to filter out. Certainly all the reports I've seen would indicate that nobody was happy with it except the Russians. I think, on the plus side, at least there have been no announcements of something like: You can do what you want with Ukraine or Georgia. There's no indication that this was like in the 18th century, when great powers traded away space to each other. I think there's a little bit of a sigh of relief that way.

I think it's going to be a huge problem for Trump in the US, because so many Republicans have also come out with very strong criticism, that he didn't put a stake in the heart of this whole business about Russian meddling in the US election. He wouldn't condemn it, he didn't hold Putin accountable, I mean, it's inexplicable.

DW: Trump began his European trip by criticizing NATO allies and ended it by failing to criticize Putin. What should we read into that?

First and foremost, our great alliance NATO — it's not perfect, lots of work that always needs doing — but it's still the most successful alliance in the history of the world. The alliance has made it through tough times before, but it was always because the nations shared common interests and values, and there was never a question that the US would always provide leadership. For the first time in my life, the American president put that in question, which really concerns me. What is new is that the president is so openly disrespectful and dismissive of our most important allies — that worries every military professional I know. 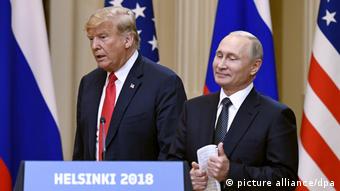 Many people interpreted the Helsinki meeting as a disaster for Trump

Secondly, I don't think the president appreciates alliances and international organizations. I think that's unfortunate, because for the US, the alliance is an essential part of our overall national security strategy. The 30,000 troops that are in Germany are not there to defend Germany, that's part of our overall contribution to collective security. And frankly Germany is the essential ally for the US, because of the access it gives us to do so much. It's our forward presence, if you will, our intelligence cooperation. I've always believed that Germany is the ally the US should be working hardest to have that relationship with. The fact that the president singled out the chancellor: I think that was a terrible mistake.

DW: But many analysts and conservative German politicians shared Trump's criticism that Germany should be spending more on defense.

Yes, having said all that, while most of the nations were beginning to do more in terms of burden-sharing, I think the president drew a lot of attention to it and probably added some momentum to it, which is needed. So I think he should get some credit for that. Honestly, half of America doesn't understand either why European countries don't do more. But I didn't like the way it's done – I think it's harmful in the long run.

DW: A lot of the points that Trump made — on NATO spending, and on Nord Stream 2 — are shared by defense analysts. So is it just Trump's style that bothers people?

I don't want to say it's just style — that minimizes the damage that Trump does to these relationships. Style is a part of it, but it's much worse than that, it's a disregard for our allies and what it means to be an ally. Germany does so much to help the alliance, and to help the United States, which doesn't fit into this 2 percent (the percentage of GDP that NATO wants its members to spend on defense - DW). I really don't like that 2 percent as the only measure. I understand why we have it, but I think it's time for a much more sophisticated approach to burden-sharing, and what it really means. What the alliance needs Germany to do just doesn't fit neatly under that 2 percent.

DW: Some people in Germany are a little distrustful of NATO and the Cold War rhetoric of antagonism towards Russia. They aren't Trump supporters, but they certainly don't want conflict with Russia either. Do you think there's any truth to the idea that we make the threat of Russia bigger than it is?

Now, there's not a long line of Russian tanks sitting across the border with engines running waiting to launch a ground invasion. I don't expect that, although they've retained that capability in combination with cyber-warfare and misinformation, and the threat of nuclear weapons. All of us, including the US, disarmed significantly in the last few years because we thought Russia was going to be our partner. The last American tank went home from Germany five years ago. The Bundeswehr almost completely disarmed, and now because of what Russia has done, everybody is hustling to rebuild sufficient capability to deter.

DW: So in that context, how worrying was this summit, and the apparent hold that Putin has over Trump?

Well, the fact that they met is not bad. In fact, the tenser the situation is the more you would want people to meet to make sure there are no misunderstandings. The problem is so many people don't have confidence in what President Trump is doing or saying. Meeting for the sake of meeting is not helpful if you're not clear about expectations and if you're not putting pressure on Russia. Again, the Russians only respect strength, and I think right now the alliance does not look strong, and the president does not look strong.

Donald Trump spoke positively of a reportedly discordant emergency meeting with 28 other NATO countries. He suggested that allies had caved in after expressing his displeasure over low levels of defense spending. (12.07.2018)