Chancellor Angela Merkel's conservatives want more money for Germany's military. But their Social Democratic coalition partners have pushed back, warning that Germany should not cave into demands made by Donald Trump. 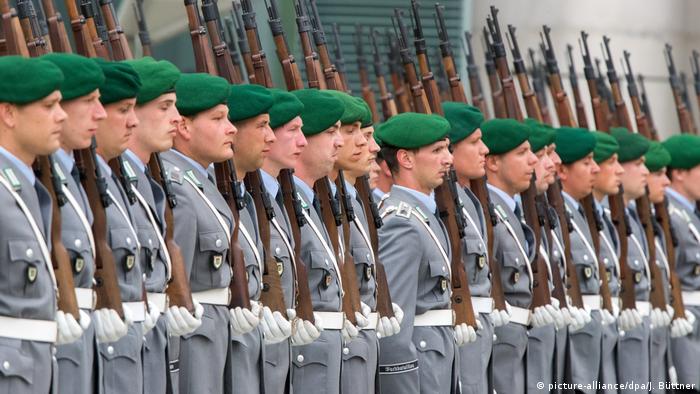 A feud over how quickly to increase German defense spending has erupted within Germany's coalition government, days after US President Donald Trump blasted Germany at NATO summit for failing to invest quickly enough in its military.

Germany most recently spent 1.24 percent of its GDP on defense and plans to increase the rate to 1.5 percent by 2024 as part of a broader effort to reach a NATO target of 2 percent.

But the parliamentary leader of German Chancellor Angela Merkel's conservative bloc (CDU/CSU), Volker Kauder, said the government should meet its stated target by 2021.

"We need to reach the 1.5 percent target ideally within this electoral term," he told German daily Frankfurter Allgemeine Zeitung on Thursday. He added that the proposal had nothing to do with Trump, but was instead a response to the poor state of the military.

The US president reportedly demanded that all NATO countries meet the alliance's 2 percent target by January 2019 during a closed-door NATO summit meeting in Brussels on Thursday. The call broke with a previous pledge by alliance members to meet the target by 2024.

Merkel appeared to respond to the president's pressure when she told reporters after the summit that her government should "talk" about increasing military investments beyond what was already planned.

But leading figures in the CDU/CSU's coalition partner, the Social Democrats (SPD), have hit back against speeding up military spending.

No subs, no transport planes

Military experts have in recent years documented significant equipment shortfalls in the military amid major budget cuts and mismanagement.

In February, the parliamentary commissioner for the armed forces, Hans-Peter Bartels, said Germany's lack of military preparedness was "dramatic." In a report to the German parliament, he said no submarines or transport aircraft were operational at the end of 2017.