Donald Trump spoke positively of a reportedly discordant emergency meeting with 28 other NATO countries. He suggested that allies had caved in after expressing his displeasure over low levels of defense spending. 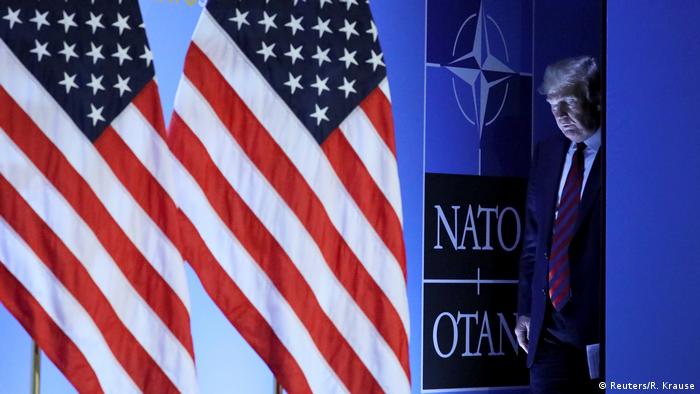 US President Donald Trump on Thursday said he was "very, very happy" after NATO allies agreed to unspecified commitments to increase their defense spending, striking a conciliatory tone after two days of divisive alliance talks in Brussels.

Trump said he had been "extremely unhappy" with allies' low levels of defense spending before the summit, but was pleased "they have substantially upped their commitment" during a "fantastic" unscheduled crisis meeting on Thursday morning.

"We made a tremendous amount of progress today," he said. "NATO," he added, "is much stronger now than it was two days ago."

NATO leaders held the emergency session to discuss US President Donald Trump's repeated demands that allies meet the a pledge to spend 2 percent of GDP on defense.

Sources close to the talks told DW's Teri Schultz that Trump demanded European NATO members meet the alliance target immediately, rather than increase spending gradually as agreed to at a previous NATO summit in 2014.

But French President Emmanuel Macron told reporters the alliance had not agreed to anything new during the meeting.

"There is a communique that was published yesterday," he said, adding, "It confirms the goal of 2 percent by 2024. That's all." A German government spokesman also said the meeting had merely reaffirmed the 2 percent goal by 2024.

Macron also dismissed reports that Trump had threatened or hinted at withdrawing the United States from NATO if allies did not heed his defense spending demands.

Earlier in the day, Trump wrote on Twitter that every NATO country needed to meet the 2 percent target, adding that spending "must ultimately go to 4 percent!"

Trump also singled out Germany over its low-levels of defense spending — it currently spends 1.24 percent of its GDP on defense — and renewed his criticism of a controversial gas pipeline deal between Germany and Russia made a day earlier.

German Chancellor Angela Merkel appeared to respond to Trump's obstinacy over German defense spending, telling reporters that the country would have to consider increasing the military budget.

"We'll need to talk about to what extent we can invest more in our military equipment," she said, adding that she had no interest in a general arms build-up.

Only three NATO members currently meet the 2 percent target, while five are expected to do so this year.

The issue dominated the president's public remarks after he arrived in Brussels on Tuesday, striking fear among European officials that the president would question the US' role in the alliance.

Ahead of Thursday's meeting, Trump once again criticized Berlin for agreeing to the construction of a $11-billion (€9.4-billion) undersea gas pipeline between Germany and Russia.

"Germany just started paying Russia, the country they want protection from, Billions of Dollars for their Energy needs coming out of a new pipeline from Russia. Not acceptable!" he wrote on Twitter, with his typical disregard for English grammar.

Trump had said a day earlier that the pipeline made Germany a "captive" of Russia. Merkel hit back, saying modern Germany was an independent country and a far-cry from the Soviet-occupied East Germany of her childhood.

Can Germany broker a Russia-Ukraine deal on Nord Stream 2?

Berlin and Moscow both support building the controversial gas pipeline, but Kyiv is opposed. Economy minister Peter Altmaier is commuting between capitals to find a compromise. Miodrag Soric reports from Moscow. (16.05.2018)